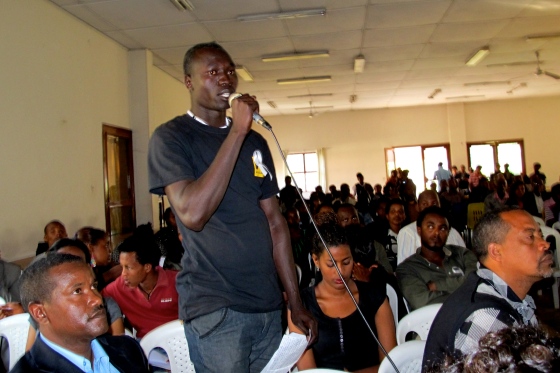 March 6, 2015(Nyamilepedia) — In an interview today March 6, 2015 in Addis Ababa, Peace Ambassador Gatwech Koak Nyuon said that he received more than sixty – (60) telephone calls from unknown numbers inside and outside Ethiopia in which five (5) calls were seriously threatening his life.

Gatwech who was last year named as Peace Ambassador by Ethiopian Church admitted that he would never give-up to call for peace in his young nation.

“I know this happened many times to Mr. Deng Athuai, The Chairperson of South Sudan’s Civil Society Alliance and I’m not surprise to receive more threatening calls from enemy [ies] of peace, why not billions of threatening calls.” He said. This happened after he directly calls on principals who were negotiating in Ethiopian capital Addis Ababa to respect the deadline.

In his personal statement published on paanluelwel and wangdunkon media on March 4, 2015, Gatwech calls on both leaders to respect the deadline. His statement partly read, “I’m not sure, but I believe neither Riek’s nor Kiir’s sons are fighting in front-line.“ A statement he refers to low pace of peace in South Sudan.

South Sudan has been known for its record on Human Rights abuse, restriction of Journalists and Activists from freedom of movement and speech.

Gatwech appreciated the roles played by local and international media for publishing some positive reports toward nation building. He also urges the media houses to act responsively as gear of change and distance themselves from tribal politics. “I know this is not happening to me alone, it’s happening to all Activists and Journalists all over the World. I will continue working with media to deliver message of peace. Those who hear will hear and those who always threatening will keep threatening but we will defeat them!” He added.

Peace Ambassador repeatedly urged the AU Commission of Inquiry on South Sudan to release the report on atrocities committed by warring factions and appeal to South Sudan’s leaders to put the nation’s interest above their owns. He concluded that he is very disappointed to see women and children suffering.

You can reach the author at mekonentefere@gmail.com

← Weirial Puok Baluang Appointed As The Press Secretary For Liech State’s Governor.
Abduction of School Kids in Wau Shulluk is Mistreatment of Minority Group in the Country. →

South Sudan Government pledges to graduate unified forces at the end of August.

Angelina Teny condemns Extra-judicial killing in Mayom, urged for an investigative committee to be formed.