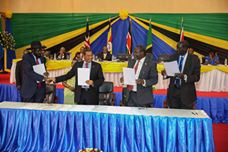 March 7, 2015(Nyamilepedia) — Per reading an impressive public statement on allegedly purging reunification agreement signed by SPLM warring factions in Arusha, Tanzania by Brigadier General Joseph Gai Gatluak, the SPLA-In-Opposition Field Commander of Northern Upper Nile on West Bank. It comes to my philosophical understanding that I can’t agree with him no more. Is SPLM reunification a root cause of current conflict to serve as roadmap to resolve the conflict even though such event unfolded upon its default? I do not think so. In fact, a fabricated coup plot led to the systematic killings of over 23,000 innocent civilians from one tribe in capital Juba is the crystal root cause of this conflict that have to be thoroughly examined and fully addressed in order to serve as roadmap to resolve the current conflict. Dodging around the fundamental root cause of this conflict at the expense of the utmost victims is another huge mistake with the same degrees as root cause itself.

It is a matter of fact, implicitly or explicitly, that, such a fragile agreement signed by SPLM warring factions in Arusha will never serve as roadmap to achieve a lasting peace in South Sudan, even if the vehicles to achieve a permanent peace in the country are inevitable. Salva Kiir must, however, step aside as president and chairman of the ruling party, respectively and that the root cause of this conflict as mentioned above led to the death of over 23, 000 innocent civilians, is thoroughly investigated and fully addressed. The cuprites or perpetrators are to be held responsible for the death of innocent lives. Through such vital acceptances, either conditional or unconditional, however, the justice must serve its course, while the young nation will move on unconditionally with nation-building programs and expedite its path toward democratic transformations, rules of law, accountability, and unscathed national reconciliations for the entire citizenry and amongst various ethnic nationalities.

More of the same failures of Salva Kiir leadership and Impunity Corrupt System (ICS) that Salva Kiir has invented and coined it “Lion’s Share” or “Have It All System” which created 2013 unspeakable violence in nascent country, are vehemently equivocal and daunting political solutions for the country. They had been retired and could not be entertained once again. They are indeed wicked mechanisms fell in line as history and currently having no shelters to rest, as they will never yield any fruit to peaceful coexistences among the people of South Sudan and let alone affirmative paths toward a democratic prosperous South Sudan.

I do concur with the statement put forth by Field Commander General Joseph Gai Gatluak, as matter of fact, I personally thank my big brother General Joseph Gai Gatluak for the job well done, as it is an obvious that miraculous things have never happened in a vacuum, but in person like him and colleagues in resistance movement. He deserves it as all the opposition commanders in the title of generals and lower ranks whose have been parcels of the movement’s success in Northern Upper Nile region and elsewhere in the country for the last 12 months, or so. I personally believe that Salva Kiir must go whether he likes or not, hence, it is a just a matter of time.

Within a line of ethical reasoning, the reasonable human beings who have tremendous senses of knowing what sought a different between right and wrong must not, whatsoever, accept Salva Kiir as their president once again, as it is decisively shown and dictated by his December 16-19, 2013 Juba systematic massacred of South Sudan citizens based on ethnic grounds. The cripple SPLM as a party must understand that the 2013 intentional killings of over 23, 000 unarmed civilians in Capital Juba coined a fabricated military coup adds to existing persistent rampant corruptions, quest for federal system as mean and way to governing South Sudan; ultimate freedoms and respects for human rights are not longer, either partially or wholly, party issues. They are nonetheless compelling national issues. They must, therefore, be discussed and agreed upon in open peace talks led by regional blocs (IGAD) in Addis Ababa, Ethiopia.

A private peace talks in Arusha will not bear productive solution to the current conflict. To limit a hinted fundamental quest for all the aforementioned inalienable rights and the utmost interests of the citizens of South Sudan to merely a small SPLM problem, is another invitation for unfathomable continuation of current conflict and the future gloomiest events in such a category.

Death is an enormous and feasible choice over Salva Kiir’s additional sole ruling years in a presidency to commit more genocides, as it is a feasible choice for him to everlastingly stay in nation throne to just do that. Killings of innocent citizens as the best political apparatus of current genocidal regime of Salva Kiir to secure omnipotent power is undeniable business that had seen taking place in Capital Juba and deemed setting horrendous instance in South Sudan history witnessed and loudly echoed the whole world. It was a move that would never be forgotten and easily not to be forgiven equally to Jewish massacred during Second World War and other genocidal crimes which had been committed in world based on political or ethnic grounds. When a time comes, it may only justice, and nothing else, can spare Salva Kiir from these intentional committed genocidal crimes against selected citizens within the country.

This matter is hinted beyond the realm of death panicking, foul-nationalism and intra-party emotional reunification. Those who had been massacred by Salva Kiir and Yoweri Museveni in Capital Juba as result of splm political decay that led to violent fallout, were unarmed civilians who have nothing much to gain or achieve as result of this allegedly political reunification of splm party, while their wrongful demised surfaced as calculated crimes to lively demoralize and deter the entire ethnic nationality at the expense of president’s tribe to obtain its ethnical superiority-sect in the country, to dictate about everything that suits their ethnic superiority. They are crimes which abundantly came on the deeds of superiority thinking, therefore, we, in the SPLM/SPLA-In-Opposition organization must be dealt with such a cultish mentality so seriously to make sure that such a mindset is not longer the case in South Sudan day in and out.

Come to IGAD and AU responsibilities as organizations responsible to bring about permanent peace to South Sudan. If nothing else feasible to begin with, one would come to conclusion that, it is a monstrous stupidity by IGAD and AU leaderships, respectively to allow Salva Kiir and Yoweri Museveni to participate in IGAD and AU decision-making discussions to solve South Sudan conflict which they had initially invented. For IGAD and AU to reshape themselves as Africans vital organizations to bring about lasting peace to South Sudan and to thoroughly investigate the root cause of this conflict, they needed to exempt Uganda and South Sudan leaderships from participating in any IGAD or AU decision-making discussion which concern South Sudan conflict, as they are officially members of warring parties. It gives a wear look to both IGAD and AU leaderships, respectively for negatively believing that Salva Kiir and Yoweri Museveni are keen super human beings beyond their human egos and audacities to convict themselves in calculated crimes which they had committed in South Sudan against sole ethnic community.

In wishing to bring about permanent peace to South Sudan and denounce war and all ills come along with it therein, therefore, we need genuine third party rather than toothless IGAD and AU as regional and continental blocs, respectively who their member countries, wholly or partially, participated in active combat missions against South Sudan opposition forces in defending genocidal regime of Salva Kiir. It was critical and yet remains a fundamental issue that the world community needs to vigorously pay attention to it and address it thoroughly should it seriously eager to bring about permanent peace to South Sudan. In real world where problem solving is a critical business, Salva Kiir and Yoweri Museveni couldn’t have been allowed to act as they are defense Attorneys, judges and criminals in trial at the same times before the world community. It is a horrendous mistake that needs to be immediately corrected to expedite peace process, and for a concrete peace to surface once again in South Sudan. They need to be rightfully cornered and placed in a solid criminal category where they belong.

For Salva Kiir to seek more leadership legitimacy to rule south Sudan once again over impending tainted term, either through reunification of disarraying ruling party or daunting unilateral extension of its term by tainting national legislature, is completely insanity or bears no value to sell. Mr. Salva Kir has a personal incurable leadership problematic merely boosted by corruptions and tribalism-sect, which will never rescue South Sudan as nation until he runs away for his own unworthy life to a foreign country vs. freedom fighters. In a business perspective, his quest to lead South Sudan once again after he had committed systematic massacre against sole ethnicity within the country simply because his main political rival is from that community is an item that had depreciated to the ultimate retirement, compared only to a wicked notion of borne to rule cultish thinking. It is an item or notion that will never deem itself a chance to heal. The days of perpetuating such an awful cultish thinking are outdated and that, those mindsets are ultimately dead beyond resurrections.

Finally, it is a fundamental fact that the ongoing war is fought by citizens of South Sudan on both sides of warring parties and not the SPLM members. One could wonder if the warring SPLM factions reunite their ranks and files based on previous leadership hierarchy and needs, which are deeply based on dictatorship, totalitarian regime, rampant corruptions, excessive human right violations and tribalism-sect led to massacre of sole ethnic community members in 2013 event in Capital Juba. Is that really what citizens have been fighting for the last 13 months to achieve rather than total reforms in the country? I believe not. If so, where will they put Nuer White Army, Dinkas DotkuBeny militias, Gulwang, Mathienganyor, Shilluk and Mabaan Defense Forces? Will they offer just thanks you to them and ask to go back home and cultivate their farms once again as Salva Kiir recently offered to Nuer White Army in his last fake amnesty decree? If it is the case, what will they do to those who had already demised in the middle of the conflict defended them on both sides? I am carious.

The Author is rebel commander deployed in Northern Upper Nile. He can be reached @ dengliem2015@gmail.com.

← Draft Report of the AU Commission of Inquiry on South Sudan
Government Troops Advancing on Greater Upper Nile and Jonglei. →

3 comments for “Is SPLM-Party reunification a root cause of current conflict in South Sudan?”

Opinion: The bloody power struggle for succession and the enemies from within

South Sudan has Killed its Best: In Memory of Kerbino Wol, South Sudanese Businessman and Philanthropist