South Sudan rebels in Upper Nile report that they have bombed a Ugandan warship ferrying troops to Wedakona(Photo: supplied)

March, 2015 (Nyamilepedia) — South Sudan’s rebels from infantry 7th division of SPLA-[IO] in Chollo kingdom, under Brig. Gen. Joseph Gai Gatluak, alleged that they have bombed and wrecked a Ugandan Ship ferrying a mixed troops comprising of South Sudanese, Nubians, Funj and Ugandans to the front line at Wedakona.

According to division 7th military Spokesman, Capt. Paul Malith Koang Riaw, who spoke to Nyamilepedia correspondent from Manyo County, the warship was reinforcing a government troop, which fought for control of Manyo County’s headquarters, Wedakona, for nearly a week.

Malith explains that the rebels, who controlled the County for the past 15 months, temporarily withdrew from the town last week to lure in logistics, equipments and ammunition from the government side, however, the allied troops made attempt to pursue the withdrawing rebels which triggered over four hours of fierce battles.

Capt. Malith reports that after four hours of heavy battles, the government troops were defeated, in which a tank and the reinforcing warship were bombed and destroyed by the rebels.

“On Wednesday we were followed and attacked by the government forces in some areas of Manyo counties northern payams after we tactically withdrawn from Wedakona. We instead engaged them and managed to chase them back and we bombed a tank and a ship which transported the UPDF and Funj militias to fight us in Wedakona” said Capt. Paul Malith Koang Riaw, the division 7 Spokesman and the director of PMO in the division.

“ It is rare for a senior commander or General to actively catch the trigger of the gun in the battlefield and fight the enemy physically like what has been done by Brig. Joseph Gai, hand by hand, with his soldiers during the 4 hours battle”” stressed Malith. 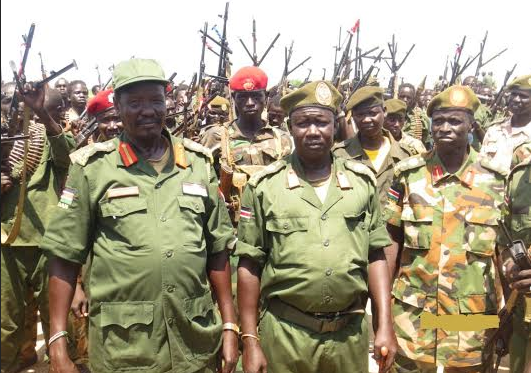 According to South Sudan Military Spokesman for SPLA-Juba, Col. Philip Aguer, Wadekona has been a launching pad for the rebels since February 2014.

Manyo County has been under the Opposition since the commanding generals of what was formerly the “National Army, SPLA” declared their loyalty to South Sudan’s former Vice President, Dr. Riek Machar Teny.

For the past 13 months, Wedakona has been showcased on the News as one of the bases where the IOs shell Juba’s positions at the neighboring Renk County, on the Opposite side of the river Nile.

For the last two weeks, war has intensified in Manyo County as the two warring parties continue to exchange hands at Wedakona.

According to Capt. Malith, the Opposition is determined to “clear” the whole County to maintain control of their strategic position, a report that will be verified with time.

Education Sector gets enough budget for the first time.