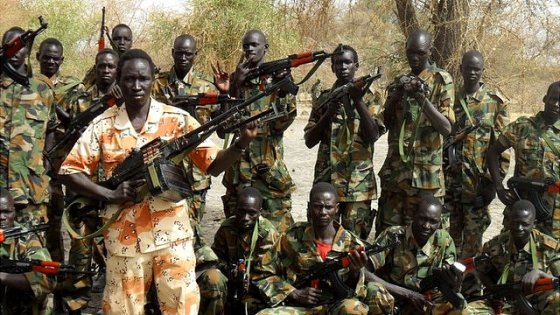 Anti-government fighters at the battle fields in South Sudan in December 2013(Photo: Reuters)

March 27, 2015 (Nyamilepedia)-—Heavy fighting has been reported in Ayod County, Jonglei State, on Wednesday and Thursday with both factions accusing each other of carrying out attacks against their positions.

Several Media outlets reported the incident, meanwhile the General Headquarters [GHQts] in Bilpam today confirmed the incident saying the Government loss three [3] soldiers and a major, whose name was not disclose, while 13 others sustained wounds from the rebels attack, a claimed Nyamilepedia Press Team couldn’t verify.

While different sources says, the Rebels under the command of Maj. Gen. Gabriel Duop Lam, the Military Governor of Phou State, repulse the government forces who tried to penetrate into the nearby villages in searched of food and territorial gains, resulting in liberation of some part of Ayod town.

“The fighting was the worse one of all which was fought at the outskirts of the town today, the rebel managed to pushed the government forces back to their trenches, while the fighting got intense, the rebel had an advantage to liberate; Maderes, Luuthjang, Pul chuol chany and Kalibalek.” said the witness whose name was upheld due to insecurity in the country.

The witness who talk on condition of anonymity also revealed to Nyamilepedia Press Team that the government are still in control of ‘Palith’ in Ayod an army Barack located at the South eastern part of the Town, and which face the direction of Kuach-Deng Payam towards Duk County.

The government Spokesman for SPLA-Juba, Brig. Gen. Philip Aguer Panyang, made the announcement on SSTV. He noted that the rebels lost a significant number of troops.

“In Jonglei state, the rebels of Riek Machar attacked Ayod on the morning of the 25th [March] at 05:30 AM and the attack lasted for an hour and a quarter before they withdrew leaving 54 bodies of their soldiers on the field and SPLA is [still] controlling Ayod.” He said.

However, the acting Spokesman for SPLA-IO Col. Lony T. Ngundeng is yet to comment on the ongoing battles in Ayod County.