Our culture is our identity 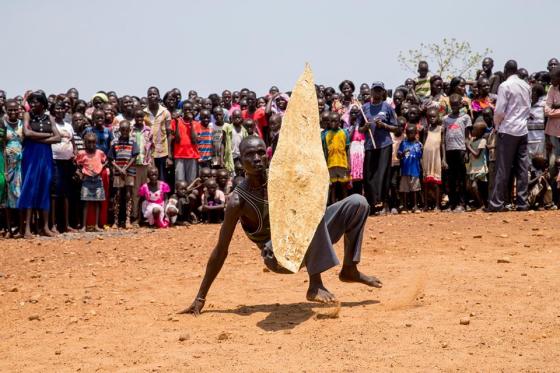 April 6,2015 (Nyamilepedia)-—Naath culture, the strongest cultures in Africa compared to that of Zulu in South Africa had conducted a two days cultural heritage dance in UN camp in Juba south Sudan on 27-28 March in IDPs Camps, the Nuer cultural dancers made up of all sections of Naath-Nuer clans concluded the cultural heritage week

Many people who resides in the IDPs Camps are believed to have attended the function which was extraordinary according to Nyamilepedia press agent who actually attended the event in person.

“The event was really good, many people turn up and there was lots of funds, people really enjoyed the function” said Nyamilepedia reporter.

According to Deng Nhial Chiok Dhoar the founder of “Frika Male” or ‘Male’ Dancer group leader, He said the function was actually helpful to those who lost their loves one and to those people who suffered psychologically.

“The reason you see young men and young girls dancing, is to boast their moral, psychosocial support, heal thy stresses, called for peace and to restore hope once again”. Asserted the prominent cultural activist who dressed in leopard style.

Deng Nhial also told our Press team that it is the general awareness program to the community in services of health, education, etc.

“This dance will hopefully bring peace, love and harmony, unity among IDPs communities through cultural heritage values and to educate the new generation on the Naath-Nuer cultural values, norms, customs, traditions”. He said

In an interview with our press team, the active leader [Deng Dhoar] send a signals to all members of Naath family in the globes to provide a chance for Nuer Community to realize the importance of Nuer language, customary laws, economic wealth, social values and the significant of heritage properties.

However, Deng Nhial Chiok also call for the participation of Nuer Community in articulating and contributing positively towards organization of Naath-Nuer cultural heritage sites, documentations, publications and solicit a yearly calendar for Nuer Cultural Heritage to holistically support their culture to develop.

The Unity of Nuer is their existence!