OMAHA, April 14, 2015(Nyamilepedia) — As the regime in South Sudan remains an obstacle to finding an everlasting peace in the world’s youngest nation, the humanitarian crisis is deteriorating in an alarming rate.

The two leaders arrived in the city of Omaha, ahead of the first humanitarian conference hosted by South Sudan Relief and Rehabilitation Agency-USA, the humanitarian wing of the SPLM (IO). 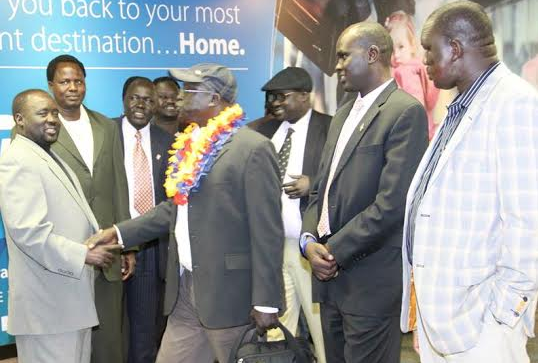 The SPLM (IO) under the able leadership of Dr. Riek Machar established a humanitarian wing of the movement known as South Sudan Relief and Rehabilitations Agency (SSRRA) to facilitate humanitarian needs. With more than 4 million at risk of hunger as a result of the current crisis in the country, the SSRRA-USA calls on all the civil society, NGOs, donors, leaders of the United States, and the diaspora to come and strategize on how to avert the humanitarian crisis in the country especially in the SPLM/A liberated counties.

The conference is scheduled to take place on April 17th-18th in the Omaha, Nebraska under the theme “Creating Humanitarian Awareness and Peace Building in South Sudan”. William Pay Tuoygil the chairman of the SSRRA in the United States and the leadership of the SSRRA-USA invite all civil society organizations, NGOs, faith-based organizations, general public, and UN agencies in United States to attend and participate in this humanitarian conference crucial to saving lives. There will be presentations, panel discussions, peace building workshops, and latest humanitarian field update from the SSRRA General Headquarters.

There is no doubt this conference will bring an awareness for individuals and NGOs interested in averting humanitarian crisis in the country while fostering a better relationships between civil societies in quest for a sustainable peace in the country.”

Both Hon. Hussein Mar Nyuot and Mr. Gabriel Changson Lew Chang – who has already arrived in United States but in a different state – will be briefing South Sudanese diaspora and the SPLM/A supporters across the United States on the humanitarian crisis and the current development at the peace talks in Ethiopia. More than five thousand South Sudanese diaspora, American leaders, and faith-based groups are expected to attend this important conference

← Defected General “Feels at Home”, Promises To Lead in the Struggle
Remarks of Cde Michael Mccarthy For the Dedication of the University Of Juba College Of Law →

19 comments for “SPLM Leaders Travel to the United States!”