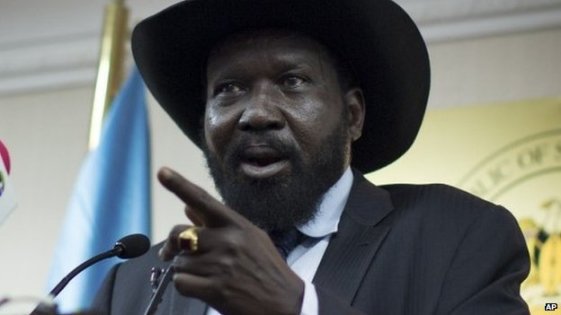 Salva Kiir Mayardit, the incumbent President of South Sudan who has struggled to maintain power after an internal disputes within his ruling party (Photo: file)

It is unbelievable that Salva Kiir has since mid-January pocketed over $2,6 million in allowances from foreign trips some of which were otherwise unproductive meetings. The other trips were for medical check-ups.

In total, Kiir Kuethpiny has blown $10 million on at least nine foreign trips. South Sudanese would obviously wonder where his wits are. According to senior government officials, on each of the trips Mayardit is receiving on average $800 000 in allowances, with each aide getting a minimum of 1200 ssp per day. On top of that, Salva Kiir Mayardit President of the deteriorating South Sudan always travels with several aides among them his cronies.

This is unfortunate given government is struggling to pay its workforce and provide basic services such as public health care. Could this be the reason why he’s always traveling at a time government is broke?

One wonders how President Kiir could blow this much money at a time government is struggling to grow the stunted economy. Sadly, some of the meetings could have been attended by low-key government officials or even his deputies who don’t need hordes of aides by their side.

We believe if Salva Kiir was serious about plucking South Sudan from its political and economic morass, he should be realistic and reduce his traveling entourage.

President Salva Kiir Kuethpiny, like many dictators, does not spend his money, but the State is paying for him and his family. It is unbelievable that Treasury has become a collection bag for Kiir and his regime to have fun.

Isn’t it true that there is nothing called benevolent dictators in real life, and Mayardit should know that?

On the other hand, unrealistic expenditure not only by Salva Kiir himself but by his relatives and SPLM is now very common. The country continues to witness fake development projects and a waste of public finance at the taxpayers’ expense.

President Kiir must know that the black people of South Sudan are not blind. It is clear that the President is abusing power for his personal gain. What is happening is clear robbery of public wealth with impunity although the public are made to believe otherwise.

No doubt the President has deliberately emasculated the institutional set-up, yet SPLM-Juba Faction believes that the First Family is the only one capable of revitalizing sanity and develops South Sudan.

Is it not true that the basic definition of corruption is valid for all of Mayardit’s actions? We wonder how Salva Kiir can abuse State resources when people are reeling from innumerable economic hardships.

It is disastrous that south Sudan’s natural resources and most profitable industries and businesses are being exploited by a few individuals in the ruling SPLM.

The economy and strategic institutions are being controlled by a family oligarchy or cronies.

Although Salva Kiir has always refuted reports that he has morphed into a dictator arguing that south Sudan has once held a colorful election, it is clear from his actions that he no longer has the masses’ interests at heart.

It is time Gen. Kiir is reminded of Greek philosopher Plato, who once said: “Dictatorship naturally arises out of democracy and the most aggravated form of tyranny and slavery out of the most extreme liberty.”

Suffice to say that in a dictatorial set-up, all elections are won by the party of the dictator. Therefore continuous fake victories by SPLM-Juba faction in their stronghold Juba are an indication of a questionable regime because people naturally prefer changes, so something unnatural is happening to prevent it.

So, Salva Kiir’s tool is his abuse of all State resources for his political agenda and propaganda. Is it not true that under Kiir Kuethpiny, all social and public institutions are generally being run by coteries of stooges or relations and manipulation of any steps in an election is just simple?

Is it also not true that all that the people hear from public media are President Kiir’s personal achievements, Makuei, Kuol, Malong, and his untested vision? All these images are meant to present Salva Kiir as the most pious, respected and courageous leader who was born to liberate south Sudan against all possible evil.

President Kiir should know that most dictators have fallen due to people’s sacrifices; not through electoral defeats. South Sudanese will not be fooled again.

Cde. Sirir Gabriel Yiei Rut is a writer and He is the Chairman of SPLM Youth League Chapter in Egypt he can be simply reach through sirirgabrielyiei3@gmail.com.

7 comments for “Gen. Salva Kiir Mayardit, The Dictator of 21 Century.”