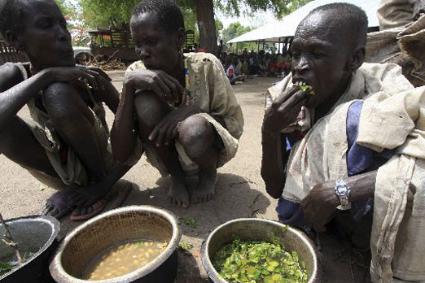 Eating leaves of trees, water Lillies, reptiles, roots while starving more than 50, 000 children may die from hunger, million displaced and more than half of the country’s population live in poverty as Salva Kiir government invest billions of US dollars in military to fight the war(Photo: Africa Review)

April 27, 2015(Nyamilepedia) — There is too much controversy across the political spectrum surrounding the current status of south Sudan as to whether it is a functioning or a failed state. The so called government and its proponents believe South Sudan is still a functioning state since the government is very much in control of the country territorial integrity and more over the government institutions still performs some of their public duties in a normal and an ordinary manner.

On the other hand some critics including prominent political figures from the opposition side contends that South Sudan is a failed state because the government is losing its grip on the country security in addition to its outright failure to provide the necessary functions that qualifies it to be a government.

While the third group including some experts on South Sudan politics says the country cannot be designated a failed state status because initially there were no proper institutions in place that could be said to have failed, inasmuch as the whole system is arranged in an atavistic and haphazard way it therefore render it a no system at all according to this group.

But in order to tackle this central conundrum it is imperative to put the country into its proper perspective first by explaining the necessary conditions that make a country a functioning state and then secondly highlight the situation that turned a country into a failed state.

Certainly, by outlining the two scenarios mentioned above the reader would have been equipped with adequate knowledge that shall enable him/her make an independent judgment as to whether South Sudan is a functioning or a failed state and which of the three cited arguments carry the day.

Finally, the author shall posit some insight into the contemporary situation in the country following the political turmoil engendered by the armed confrontation between the government and the opposition forces in the aftermath of Dec 15, 2013 Juba massacre.

Conditions that make a country a functioning state

A country is said to be a functioning state when it carries out all or most of these ten core functions listed and explained here under.

Rule of law: perhaps the most crucial function performed by the state is law making (establishing the rules by which the society operates). Laws define both the powers and limits of the state and the people within that state. In any particular territory, one can judge the degree of the rule of law by the extent to which the state is constituted by formal rules to which people actually adhere.

Monopoly of the legitimate means of violence: control over the use of violence brings three distinctive processes together. The first is the establishment of the monopoly over the means of destruction and the use of force, the second is the establishment of the legitimacy needed to subordinate violence to decision making, and the third is the use of force according to certain rules against the citizens of the state who challenge its legitimacy.

Administrative control: administrative control should be managed by the government professionals who are accountable to the citizenry and recruited through an open process. They achieve control by organizing a state territory, functionally and spatially via a unified body of rules and practices.

Sound management of public finances: it is the vehicle through which state can realize public goals. Efficient collection and allocation of resources among contending priorities turns ideas and aspirations into concrete outcomes. The record of the state activities lies most clearly in its budgets, which is both the medium and the message. The budget brings the rights and duties of citizenship into balance.

Creation of citizenship rights through social policy: when the state uses social policy as an instrument for the establishment of equal opportunities, the social fabric created can lead to a sense of national unity and a shared believe of a common destiny. Social policy turns the state from an organization into a community of common sentiment and practice. The nation – state subjects become citizens.

Provision of infrastructure services: adequate transportation, power, water, communications and pipelines all underlie the state’s ability to provide security, administration, investment in human capital and the necessary conditions for a strong market economy.

Formation of a market: the state support the creation and expansion of the market through three major measures: setting and enforcing rules for commercial activity, supporting the operations and continued development of the private enterprise, and intervening at times of market failure.

Management of public assets: the state’s capital is not just made up of money but also a huge array of assets ranging from fixed assets such as land, equipments, buildings, cultural heritage to natural capital – forests, rivers, seas, minerals to intangible assets such as licenses to operate service and manage the radio spectrum or to import or export of goods. The way these assets are put to work for collective good is a marker of the state’s effectiveness.

Conditions that turns a country to a failed state

The country’s leadership embrace authoritarian model of governance and vested all hopes and power in the state. Some could not agree on the rules of the game for exercising public power and fell into conflict.

Relations between the rulers and the ruled are tensed, poverty become entrenched, and a distinctive category of ultra poor emerges.

Civil wars are extreme illustrations of the failure of politics. Overt hostility takes an immense toll on daily life, destroys a country’s accumulated stocks, and inflicted a terrible cost on economic opportunity.

The country’s leadership time and again has rejected stewardship of the public good in favor of zero – sum political games and accumulation of personal and family wealth.

Tensions and cleavages along ethnic, religious, race and class lines are exacerbated. At times the consequences can be tragic, leading in most extreme cases to ethnic cleansing and genocide.

Wide spread migration to neighboring and other country as the war displaced people from their homes to become either internally displaced persons IDPs in their own country or sought refuge to other countries.

The state becomes the key obstacle to the realization of aspirations of millions of people to be active participants in a world that is both prosperous and secure. Therefore, in so doing the government deny legitimate opportunity to the poor. Every day is a missed chance to remove the gaps and Marshall Assets that would address the basis of poverty. Enable people to create stocks of capital and links to the flows of knowledge and wealth.

The following conditions formed the contemporary situation in south Sudan especially in the aftermath of the outbreak of the internal conflict following the Juba massacre in 2013.

Clear absence of the rule of law, arbitrary arrest, media intimidation, rampant killing, and robberies are the order of the day in south Sudan.

Physical and human Security is virtually nonexistence in the three states of the greater Upper Nile in addition, to some part of greater Bahr el Gazal and greater Equatoria.

Pervasive corruption is the bane of the country economic growth. Poverty is becoming entrenched instead of the government working toward its eradication.

The government had completely failed to provide some basic services with the money it obtain from the oil proceeds but instead uses this money to buy weapons and mercenaries to fight its war.

Ethnic and tribal cleavages had increase and are polarizing the political situation further in the country seriously eroding by the day social fabric of the country population.

The country leadership is becoming increasingly authoritarian and as such individual human rights are infringed by the country security apparatus with total impunity.

The country’s leadership instead of using politics as a platform where power is peacefully transferred from one party to the other then politics became a catalyst for ethnic hatred and social divisions.

Massive displacement of people throughout the country where they live in UN protected camps not to mention large number of the population that took refuge in Sudan, Kenya, Ethiopia, Uganda and other far away countries within the region and beyond.

In conclusion, having outlined all those conditions that make a country a functioning or a failed state and further highlight the contemporary situation in the country, the ball is in the reader’s court to provide his/her own judgement on the current status of south Sudan as a country. taken together the conditions mentioned in the failed state plus the current situation in the country place south Sudan within states that have what is called the sovereignty gap a phenomenon created by a failed system. But remember the corollary thesis is that when a state failed to perform those functions expected of it as a functioning state, it then would have no any other designation apart from that of a failed state.

The author can be reached at puiyak@outlook.com

← A Letter Was Written……………………
What is Salva Kiir’s Best Choice Between the Shilluk and the Dinka Apadang in Upper Nile State? →

16 comments for “South Sudan: A Functioning State or a Failed State!!!”