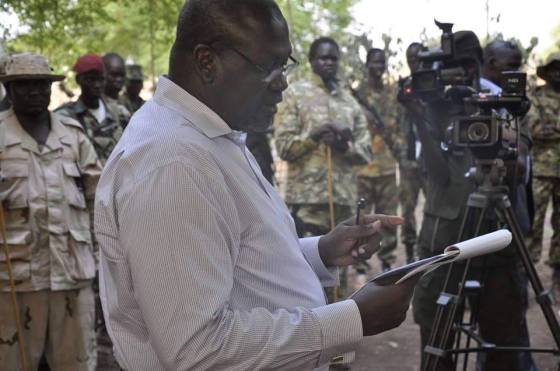 May 06, 2015(Nyamilepedia) — The leadership of South Sudan’s SPLM/SPLA [in Opposition], under the chairmanship of Dr. Riek Machar Teny, welcomes the call to establish an Hybrid Court in the region to bring South Sudanese leaders to account for the current conflict in the country.

In his latest response to US Secretary of State, Mr. John Kerry, the Opposition leader reiterates that they have been calling on the International community to address the issues of atrocities committed in the current civil war.

“In fact we are the only ones calling ever since for the international bodies to look at the atrocities committed in South Sudan. Anything that provide justice to the victim of the recent massacre is welcomed” Machar states.

The opposition has also calls on the International Community and the AU to push for official disclosure of African Union Commission of Inquiry report on the conflict to expedite the IGAD-led peace process.

The call for justice and accountability has landed Dr. Machar in tough discussions as some regional leaders and observers attempt to convince him that he should not lead the call for accountability since he might be implicated, however, Machar assures his proponents and opponents that he is ready and instead urges his main rival, Salva Kiir, to be ready as well.

President Kiir on his part wonders if Dr. Machar will account for “1991” if he accounts for the current atrocities.

According to leading members of Salva Kiir government, the call for justice, accountability and healing may impede the peace process, and therefore it should be shelved until further notice.

“This is an unfortunate statement, especially at the time when we are in search for peace.  The most appropriate situation would have been to work for peace first, bring peace and, after peace, then you make people accountable.  Now it seems that the Secretary is putting the cart before the horse,” said the outspoken Minister of Information, Michael Makuei.

“Well, I would like to see exactly that peace process is and precisely what it will do to impede it before making that judgement” Mr. John Kerry challenges Salva Kiir’s administration.

America Gives No Respect To “So Called Leaders” of South Sudan, but $5 Millions For Accountability!

BREAKING: Swearing in of the largest parliament begins, will they deliver?

Statement of South Sudan Doctor Union on the death of Dr. Domanic Pitia