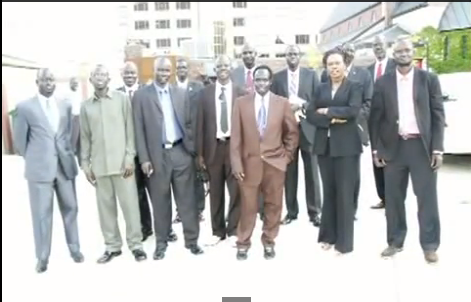 June 3, 2015(Nyamilepedia) — First of all, we would like to congratulates our citizens in our motherland of Greater Twi East area, Jonglei State, South Sudan and many places they are dwelling now. We are so proud of your perseverance and calm over the on going crisis in our new nation. We are not forgotten you our people and our Twi people land that brought forth an outstanding individuals who are always shines wherever they are. Starting unique with Dialect we have, the vast Toc/Nile River side we have, the natural height we have [e.g: Manut Bol from Western Twi Dinka and Marondit from Eastern Twi Dinka], and many other suitable things we gained from this land. All these distinguishable things are our God given stuff to us, and we have to retaining them through any means possible. Please stay safe and God be with you all our citizens. Please learn Twi people history here:http://www.twicworld.com/twic-people/

Secondly, the main concentrated point of our today press is to re-kindle ourselves in regard to what we believe we have already responded to in July 19, 2014. The first protest letter to SPLM-I-O link is here: http://southsudannewsagency.com/news/press-releases/twic-east-community-protest-letter-to-splma-in-opposition

What positive thing we got from the SPLM-I-O in regard to our first protest letter about their 21 States formation that did suggest, the Twic East, Duk and Bor Counties should be under their new State suggested “Bor State”. Well, within short period later after they [SPLM-I-O] heard over voices through that protest letter. Immediately, the SPLM-I-O changes the suggested name to “Jonglei State” whom we were absolutely desired to be; due to the name Jonglei inclusiveness in anyway when it comes to these identifiable Sub-tribes of Hol and Nyarweng Dinkas of Duk County, Eastern Twi Dinka of Twic East County and Bor Dinka of Bor County (100% Sub-tribe of Jonglei Dinkas who is a solely owned name Bor, either it is in Bor County, Greater Bor Community, Bor North, Bor South, Bor Central, Baai Boo, Mading Bor, BorTown, Bor Nyie-e/Nyieth, Bor Alier, Bor Complex [Malek Academic], Bor State, Bor State Civil Hospital, Bor Civil Hospital, Bor Alier and so forth]. All these prefix-names or suffix-names to “Boo/Bor/Boor” are for one Sub-tribe of Dinka that residing in Bor County. Citations: Will, C. A, The Upper Nile Province Hand Book: a report on peoples and government in the Southern Sudan, 1931, New York: Oxford University, Press, 1995; Howell, P, Lock, M & Cobb, S, The Jonglei Canal: Impact and Opportunity, Cambridge: UP, 1988, p.206; Sudan’s Blood Memory: The legacy of War, Ethnicity and Slavery in South Sudan by Stephanie Beswick.

Our previous protest letter in part also clearly stated that: “If you the oppositions have putted our County of Twic East under Bor State suggested name, we say to you the SPLM-In Opposition to

populace would be deadly wrong, and could be troublesome. Because it is not

himself/herself. This is 21th century. Also, the name Bor is 100% for Bor County

people alone, and not Twic people name. For instance, if we were part of that

name, our county must have not been named Twic East County, period. Please just

oppositions fighters are fighting for justice. That means nobody or community

believe in democracy manner of justice.Headquarter might be Gadiang or any place in middle they join group might choose later on. Warning to any Dinka Twi intellects or citizens that will signed on to any names or State in which we the majority of Greater Twic East Community people don’t considered as our really ancestor’s Twi/Twic or any party we don’t want to join will pay consequences. ” http://southsudannewsagency.com/news/press-releases/twic-east-community-protest-letter-to-splma-in-opposition

Thirdly, would be one of the few points from our previous protest letter, in which the SPLM-I-O didn’t address for whatever reason they might have. Specifically, this part here from our previous protest letter: “Also, we want our County of Twic East to be with Duk County, Ayod County if our neighbors would be able to accept our calls for us being under one State. And if these two Counties accept “Jonglei State name” to be our new State name. We would be fine with that, and if these two Counties decided that our three Counties should have another name they see is good to be inclusive name, will be alright too with it. This time we reject our alliances with Bor County. They better join other parties in the area or them having their own State. Moreover, just in case Duk County and Ayod County rejected our alliances. We think it should be better for our Greater Twic East Community to remains in current status of Twic East County.” We are still waiting for your answer, fellows. Democracy system respects citizens voices rather than few authorities’ voices.

Fourth, this controversial part from the article here: http://www.sudantribune.com/spip.php?article55174 . “The new Jonglei state will now comprise mainly of the Greater Bor counties of Duk, Twic East and Bor.” We know this sentence was not written by any person from the SPLM-I-O. It was written by individual [s] from Bor County where many of it citizens love write an irresponsible histories that have no ethical standards of history.

Finally, we don’t recognized your [The SPLM-I-O] appointments of what you guys called the Governor of Jonglei State who goes by the name, ‘Alier Samuel Ateny Lueth’ whom we believe the guy is not from our Community of Greater Twic East. As his name has demonstrated already, the guy could be from Bor County of Mr. Michael Makuei Lueth and Mr. Malaak Awien [Ayuen]Ajok. For instance, the name ‘Ateny’ is well-known originated from Bor Dinka people ancestors’ root name, [citation: Dinka people history] and not Eastern Twi Dinka people ancestors’ root name at all. Again, if the man did hail from Eastern Twi Dinka community in whatsoever, his name should been ‘Le-e/Leth’, In Twi people Dialect means the same as ‘Ateny’ Bor Dinka Dialect. These two words are having the same meaning but differ when it comes to these two Sub-tribes Dialects’ spellings constitute. Furthermore, we want you, the SPLM-I-O to re-shuffled your appointments by creating ‘Bor State’ and then Mr. Alier Samuel Ateny Lueth should be the Governor of Bor State, we think that is the right place for the man to enjoy his new Governorship post.

When it comes to our Greater Twic East Community, Jonglei State in which you guys have already created should be the right State latter when we got our feed back from our neighbors citizens of Duk and Ayod Counties whom we requested to join us in previous protest letter. Just in case down the line our neighbors wouldn’t be able to join us to be Jonglei State communities of difference backgrounds. The, why not the Eastern Twi Dinka couldn’t accommodate its own State Statue like Jonglei State you guys have suggested? Our community alone has a sizable population than people think. So people need to know that, we have a big population residing outside our Greater Twic East land, and many of these citizens are die-hard to their motherland. It is just a matter of on going conflict situations to come to end, and we believe the majority of Eastern Twi Dinka citizens around the world would present themselves back to their motherland whenever peace residue itself again in our new nation. Please check out this: http://www.twicworld.com/twic-people/

N/B: We don’t want that guy to comes in our Greater Twic East area until our voices been addressed as we were intended them. By the way, we are still suspecious about article though if it was truly released by SPLM-I-O. The article did appear in other Media sites. We will continue to monitor it, but we have to response to it.

This information was validated by Greater Twic East

← The Office Of GRECOR Is Deeply Shocked By The Mysterious Death Of Its Leader, Professor Wani Tombe Lako Lokitari.
Official Invitation to the GUNANA Consultative Conference for the Sons and Daughters of Greater Upper Nile Region Globally →