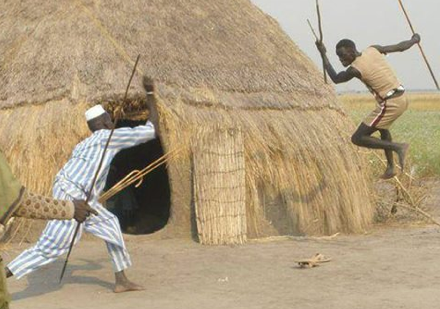 Nuer warriors demonstrating a cultural practice, aimed to highlight how men could tactically fight off a sudden attack by spears, in a close range (Photo: Nyamilepedia)

Oct 7, 2015(Nyamilepedia) — On behalf of the Nuer community in Uganda and on my behalf as the Nuer community chairman in Uganda, we do here by rejecting the newly created 28 states in South Sudan by Mr. President Salva Kiir Mayardit because of the following points:

Subsequently, for the few reasons above mentioned we (Nuer Community in Uganda) strongly rejected the unfounded concept of creating 28 States.

In conclusion dear, Mr. president Salva Kiir Mayardit I wanted to tell you that I have discover your problem now wonder you had been sick every now and then the Doctor found nothing. This is because you are healthy physically but mentally you are sick this appears when you were issuing a degree you made unconsciously and out of anger which characterizes your psychological sickness. So I would refer you to go and see The Counseling Psychologist to deal with your trauma of KILLING over 30,000 people in South Sudan or else. You better resign because you lost yourself esteem which boosted you in good decision making. It has become low and unconscious that is why you are bringing more and more mess to the people of South Sudan.

CHAIRPERSON OF NUER COMMUNITY IN UGANDA

You can reach us stephengkg@yahoo.com

Activists Complain Of Women Under-representation In The Latest Government Appointments

South Sudan rolls out the second phase of polio vaccination

Opinion: JCE, the axis of evil governing the country by proxy