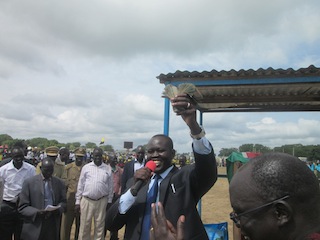 Nov 20, 2015(Nyamilepedia) —- This is what I said about we Bor people, protecting our own corrupt people and attack other corrupt officials from other tribes. Last time it was minister Gai Riem, A Nuer who was suspected and blamed for stealing Jonglei crisis fund but it was our own son, Nhial Majak Nhial who stole the money and bought himself a mansion in Melbourne, Australia. Are you really a human being Nhial Majak or a monster? Your heart is just in stealing and robbing the public. Stealing the funds in this situation Nhial Majak, really? Ci guo rioch Nhial Majak!!! Even the soul of the dead bodies collected in Bor will the haunting you forever Nhial Majak. What is wrong with you? Are you really a leadership or a thief? Robbing the people of Jonglei of their public land and their money during crisis.

Mangok Mach, what can you say about that? Nhial Majak was the one who stole the funds that were supposed to be paid to the people that help clean Bor of dead bodies during the crisis. Bor sons that collected the dead bodies in Bor Mangok? Nhial Majak stole their money and he, Nhial Majak went and bought a mansion in Melbourne, Australia with the money. What does he Nhial Majak deserve from us, the people of Jonglei?

Mangok Mach, you and your group are failures in Bor community and you and your group including he, Nhial Majak claim yourself to be leaders in Bor but you are all selfish. You are all known one by one in this Bor community my friend. You all look after your self-interest. I recommend to you Mangok Mach, to leash your tongue strongly not to mention my name “Aideed Koryom” again otherwise you smell like a public figure in Bor and that give me rights to go after you my friend. You, Mangok Mach, and those that defend Nhial Majak are on my radar now and others in your group.

As far I have known Nhial Majak here in Bor as the city mayor, he has been stealing everything that come across for helping the people of Jonglei and I cannot let it go like that anymore. I am sick and tired of Nhial Majak stealing from the people that need help and he Nhial is impressing people of his social media stunts but people do not know how monstrous this Nhial Majak is. He is disgrace to Bor community. Nhial Majak stole and pocket money donated to build levies and dykes here during rainy season.

What will Nhial Majak Buy if he become a governor and National Minister?

Nhial Majak was appointed Bor Mayor in 2012 and work under Gen. Kuol Manyang until July 2013. Then Gen. Kuol became national minister of defense. Nhial Majak has been Bor mayor for three years or little more now. Nhial Majak now owns a mansion in western country in a three-year period as city mayor.

Where did he, Nhial Majak get the money in the three-year period to buy a mansion?

When Nhial majak was under Governor Kuol, there was no crisis, so there were no large amount of money to be stolen to buy mansions and corruption in Jonglei was minimized by governor Kuol Manyang. So the only opportunity for this huge funds was the crisis and governor Kuol who was controlling corruption in the state was no longer his boss so he, Nhial Majak took advantage of the crisis and he became a millionaire. Is he, Nhial Majak a person we can call a leader, really? He Nhial Majak only came back to South Sudan from Australia to rob the people of Bor and people of Jonglei and he did. He took their money and he is taking their land now.

Three years as Bor Mayor and Nhial Majak own a mansion in Melbourne Australia. This is the mentality of African leaders, steal the public funds in Africa and buy mansions in western world. What is Nhial Majak going to buy if he become a governor of Jonglei? He will buy empire state building in New York. What if he become a minister in the national government? Nhial Majak will probably buy the tallest tower in the United States, Sears Tower. This is how corrupt and selfish Nhial Majak is and people like Mangok Mach Bol are out there protecting him and calling him a great leader.

This is what few folks said about Bor Mayor, Nhial Majak.

Deng said… nhial majak caused the two tribal fights between bhar el ghazal and bor community in kakuma refugee camp and many lives were lost as result. when in australia he fought with his brother-in-law and he ordered his cousins to slit his throat and he punched one of his bothers-in law in the head until he fianted. he (nhial) and nyuon akau recently bought big mansions with money they stole during the current crisis in melbourne, victoria in australia.he recently quarrelled with mamer ruk, bor county commissioner about land and jurisdiction.

David said…Hey Bany anybody can stop thief from stealing if he/she sees one. Wal has absolute right to stop that kind of behavior not because he is a government official but he is a community elder. If he see me stealing and he let me do it and then tomorrow you will do it and eventually the whole community behavior like that and that is not good. So brother elders can not be intimidated or insulted when they are telling the truth. That piece of land Mr. Nhial claims should have been given away long time ago before he came to Bor from Australia. that land belong to government no doubt and about that.

Who doesn’t know Nhial Majak is the same Nhial Majak we knew in Kakuma? A guy this violent and notorious and we call him a leader. Really? He belongs behind bars, not a leader.

In conclusion, we have to honor our Bor culture of truth telling. Nhial Majak is Bor first mayor and that is down in history books and no one can deny that. Nhial Majak, owe the people of Bor and people of Jonglei the money that he stole and bought that mansion in Melbourne Australia. We need them back. The land you are trying to grab is our public land and you cannot take it.

The author can be reached at aideedkoryom@gmail.com

← Group of artists in Ethiopia congratulate South Sudan warring parties on their commitment to implement the peace deal
Why Salva Kirr Would Rather Go To Hell To Reward His Dinka Tribe In Expense Of The Nation! →

Press: Citizens call on government to review policies on PWDs in South Sudan