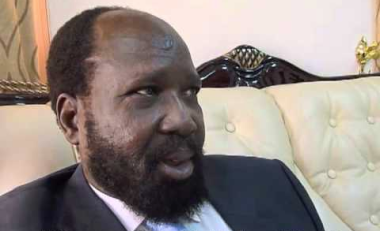 May 08, 2016(Nyamilepedia) —- It is finally uncovered that President Salva Kiir is grooming his own successors. Surprisingly, some of those individuals are low profile and conduct their clandestine operations even in their houses and bars; some of Kiir’s spies were those who killed our liberators during liberation struggle. For example, Steve Paterno, who is an alcoholic and dead beat, is strategically located in Embassy of South Sudan in Washington DC. Kiir’s group considered him their brainchild. In Washington DC, Steve frequents various bars and restaurants, showing all kind of money he has, to buy off supporters. Even in his messed up apartment, he regularly holds political sessions while assuring everyone that his ugly place is Nyakoron Center.  How shameful!!! He secretly takes all the information, documents them and sends them to President Salva Kiir whom he calls his uncle even though we know Steve is a Latoka, an insignificant tribe in South Sudan,  Kiir is a Dinka.

This stupid President puts Gen. David Yau Yau as their military guy, to take over in any event of revolt. Yau Yau is not educated even to know right and wrong.

Then, they have their coordinator, who is putting the group together. He goes by the name Akot Lual. Akot Lual is a relative of the president. The guy goes everywhere and buys people to support the stupid president.

← The Imminent And Undefined Roadblocks To Compromise Peace Agreement (CPA II)
To the Savage Killers, Ethiopians Blood is Not Cheaper. →

Press release: Condemnation over the gruesome killing of Gaajaak civilians from Longechuk County

Biden becomes the 46th president of US

Opinion: Eng. Bol Ring Morwel’s 2027 plan for the Oil and Gas Sector in South Sudan is a national economic strategy.