Federalism Base on Geographical and Regional System: a peaceful solution to the conflict in South Sudan 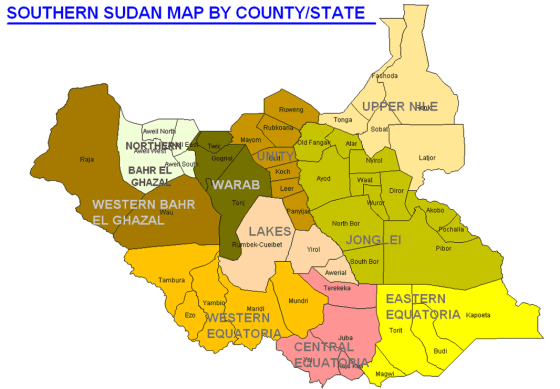 Blessed are the peacemakers, for they will be called sons of God (Mathew 5:9)

June 11, 2014(Nyamilepedia) — The Comprehensive Peace Agreement between Sudan and South Sudan was signed on January 9, 2005 in Nairobi Kenya, between Sudan People Liberation Army (SPLA) and the government of Sudan. This accord was witnessed by renounced international personalities as well as Colin Powel, the former Secretary of State for the United State of America. In April 11, 2010 a national election was held in Sudan following the terms of the agreement in which the president, the vice president, state governors, members of the national legislative assembly, members of the State Legislative assemblies, and Counties assemblies were elected.

On January 9, 2011, a referendum was held in Southern Sudan to determine if the South would want to separate from the North and constitute an independent Country. The People of South Sudan voted overwhelmingly for the separation of South Sudan from the North to become an Independent country on its own rights. South Sudan then became independence on July 9, 2011. With the independence of the South prayers and hopes, the people of South Sudan were for the grace of the Lord to be bestowed on this young nation and for peace to reign on South Sudan and Sudan as well. Unfortunately, this young country in Africa went back to war again on December 15, 2013. The fighting that erupted on December in the capital of South Sudan, Juba, started as a political conflict within the ruling SPLM party. This conflict quickly transformed into an ethnic conflict with people being killed along ethnic line. The conflict soon engulfed the national army splitting the army into two factions, the faction supporting the current president of South Sudan, Mr. Salva Kiir and the faction supporting his former vice, Dr. Riek Machar. The conflict that started with disagreement between leaders of the ruling party soon spread to the states with devastating consequences inthe three states that are located in the Greater Upper Nile region. Today, it is estimated that about 1.3 million people have been forced to flee their homes and 90,000 are currently sheltering in UN bases and compounds across the country and 100,000 are displace to the neighboring countries and 86,000 are hiding for safety in the bushes of South Sudan.

Peaceful solution to the conflict in South Sudan

The Republic of South Sudan needs a new system of local governance and administration which should be put into place immediately. This new system should be based on a Presidential, Federal Republic, and Representative Democracy ideals, similar to the United Arab Emirates and the United States of America. The United Arab Emirates is governed by a federal supreme council made up of the seven emirates of Abu Dhabi, Ajman, fujarah, Shajiah, Dubai, Ras-elkhimah, and Umm-Alqaiwain. All responsibilities not granted to the national government are reserved to the emirates or States. A percentage of oil revenues from each emirate are allocated to the UAE central budget. The capital is Abu Dhabi. In 1962, Abu Dhabi became the first of the emirates to begin exporting oil. The first president of the emirates focused on the development of the emirates and directed oil revenue into healthcare, education, and infrastructure. Today’s, emirates oil services ranked seven largest in the world along with the seventeen largest natural gas reserves. Emirates has a developed high income economy which enjoys a sizable annual trade surplus and ranks as the world’s nineteenth highest in term of GPD per capita (nominal). Its most populous city of Dubai has emerged as global city and a business gateway for the Middle East and Africa.

South Sudan is home to many tribes (63) and wide variety of ethnic and language groups that speak different languages or dialects. The only system that will bring the people of South Sudan together and rebuild the truth which has been destroyed by the ongoing ethnic war is the federation of independent regions of the United Regions of South Sudan with 3 administration units:

Finally, we are here by passing our condolence to all people including me, who may have lost a love one that died during the ongoing war. God bless their souls and rest in peace.

Related articles on the debate:

← What is behind Peace talk in Addis-Ababa?
Bravo Equatorians!! →

6 comments for “The Debate: Understanding Federalism”