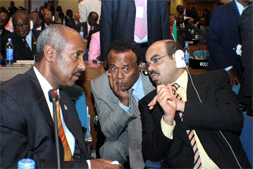 Sept 04, 2014(Nyamilepedia) — The death of H.E PM Meles Zenawi is a disaster to Nuer nation in particular and Ethiopian as whole. The recent uttered by Ambdr. Seyum Mesfin against the south Sudanese Opposition is seriously nonsense and if such a words came into effect than Ethiopia is aiming for more destruction than south Sudan. Ambassador Seyum Mesfin which I
assumed in details knows the historical relationship between Nuer and Abyssinians need to revisit his aphorism and immediately apology.

After the death of Ethiopia charismatic leader, premier Meles Zenawi, Ethiopia became a country whose direction for brighter future is unknown. I want to remind Seyum Mesfin that, Ethiopia is a pride of Africa because she was never colonized. Her ability to fight against presumed European magic is what made us proud today. They have the spirit of pan Africans.

Before I go into details, let me lecture some of the sensitive historical facts about Nuer of south Sudan and the people of
Abyssinia.  There are three major wars Ethiopia went through and Nuer was the force behind such a successful encounters.  Early in 1896 Ethiopians met with mighty Europe nation, Italy fought in the battle of Adowa and Ethiopia won.  There present over 240 Nuer who accompanied Tong Kier yang from Wecdeng. The Bull that prophet Ngundeng Bong gave out to King Menelik II as gave to fought invaders. In that battle only 52 men whom Ethiopians today decided to bury their history for unknown reason returned back home while the rest got kills. They were our grant grandparents helping Ethiopians fight their enemies in the midst of historical intake.

That alone is mighty bonding that cannot easily be spoiled by simple intimidation and threats from the outside world. During the great Ethiopia and Eritrea war that saw Ethiopians almost reap of their cousins, Eritrea, Nuer men and women were the dispatch
orders. They exclusively fought very hard.  And won hundreds of battles until the war subside between the two nations. More than 5,000 young men and women from Gambella suffered heavy lost and many of them died.

Capt. Nyapouc Yien who is today a leading force behind many successful encounters between south Sudanese civilians and UPDF was a product of an Ethiopian trained manpower. Successful writers like Mak Banguot Gok spent the rest of their youth servicing Ethiopia army and fought well. Thousands of thousands which today Mesfin failed to honored and desert their services still exist. My own cousin was killed in Ethiopia war against terrorist of Somalia. The Somalia war is far much to be mentioned here and let me not go into those details because of time.

Times and darkness should not surpass these memories.

Then why Ethiopia is being use by Igad to threats her national pride of making decision? Uganda is taking a role in solving south Sudan crisis and at the same time fighting the same south Sudanese while Ethiopia is chairing the setting of Igad organization. This is being cowardice and if Meles Could be alive he cannot allow his country to be a mouth for food to be used at any length. That should not be the image of Ethiopia but both Seyoum and Haile want to spoil her history. Infact the death of Meles is hurting us and  diminished Ethiopia’s voice from the IGAD countries. Haile is driving Ethiopia to nowhere arena.

I want to remind Seyum that, if Ethiopia is managed and manipulated by Uganda and fight Nuer who are seriously in need for survival and protection of their last kind, then it is important to remember that, south Sudan war is likely to be less serious. But you are likely to destroy your own body.

The enemies of Ethiopia will laugh while Ethiopia is getting down into the darkness. This is important to Ethiopia economic and political security as well.

Writer could be reached at guandongyak@gmail.com