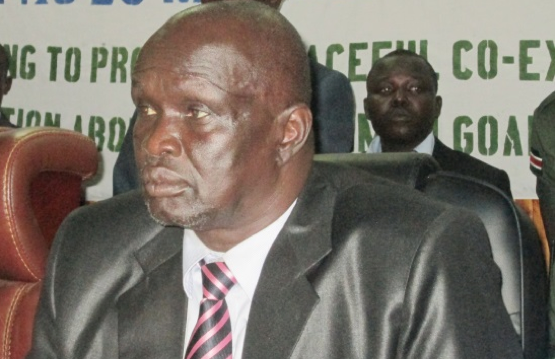 Sept 05, 2014(Nyamilepedia) — The military caretaker governor of Lake state, who replaced Governor Chol Tong Mayai, on 21st January, 2013 threatens that he will not sit if removed from his current position for nothing.

Mature reminds Juba that people “decide an evil thing” when they are frustrated, and the general would not be spared if removed  because of the alleged insecurity in his state.

“ People feel frustrated sometimes and decide an evil thing when they are accused of not doing good when they’re doing their best.” Matur said.

“I will not sit there when I’m removed for nothing. Its not in my character [to] involve in evil things like what the rebels are doing but if I’m left without nothing else and removed while serving these people of Lakes State fairly, I will revolt against those groups of people”

Governor Matur was responding to parliamentary session that unanimously agreed last weeks to remove him, citing insecurity that has claimed more than 300 lives in the last four months.

Matur believes that the president is under pressure from unnamed people whom he blames for misleading the president.

“There are people who are busy there in Juba trying to find a way to remove me, giving our loving president wrong information about the ethnic revenges in this state” the caretaker governor said.

Matur blames the same group of people for the current civil war, which has claimed tens of thousands of lives in various part of the country, however, insecurity in the state has claim Matur brother’s life. Chief Apareer Chut, an elder brother of governor Matur Chut, was shot dead in Pacong Payam of Lakes State on August 5, 2014.

“These are the same people who have been confusing the president day and night so as to put the country into where it’s now. Lakes State is security is under control but Juba is not. We have reduced the crimes and not like before and too many guns that were in the wrong hands are being collected in thousands. The state security will be among the best in South Sudan very soon” Governor said.

The governor, who has been increasingly isolated in the state, blames Salva Kiir government for the massacres of civilians in Juba and other parts of the country. He pointed out that the government should repair the wounds it has created in Juba instead of attempting to create new wounds in Lake state.

However, according to Minister of National Security Obuto Mamur Mete, the governor “has to be brought to justice whether he is the son of a devil or a king.”

“We behave as if we are visitors in our own country,” he complained. “If [caretaker governor] Matur is a criminal, he has to be brought to justice whether he is the son of a devil or a king. Why do you treat people on kid gloves and other people on iron gloves?” The Power General Obuto said.

As hinted, the caretaker governor may opt to join the rebels instead of his former governor, Chol Tong Mayai, in the SPLM- Former Political Detainees (SPLM-FPD).

Governor Chol Tong and Governor Taban Deng Gai of Unity state were removed within the first quarter of the year[2013] due to “insecurity” concerns, however, the two states remained relatively stable compared to Jonglei state, where thousands of people died during the leadership of Governor Kuol Manyang.

Critics believe that governor Chol and Taban were removed from their positions after they withdrew their support for Salva Kiir regime.

The president relieved 172 army and police generals within the first quarter of the year and later on in May removed the powers of his vice president, Dr. Riek Machar, in a controversial decree that was denied by many politicians on the state owned television [SSTV].

The controversies of removing Dr. Machar’s powers in May cost the entire cabinet their positions in July. The president also decreed SG Pagan Amum from his SPLM’s secretariat and restricted his movements.

The president further dissolved the whole SPLM party in November and threaten to dissolve the National Legislative Assembly, however, the political ties within the ruling party rapidly worn out before December.

← Professor De Chand: The Right of Self Determination!
South Sudan: African Union should take a lead in the peace process! →

1 comment for “The Military Caretaker Governor Matur Chut Will Not Sit If Removed!”