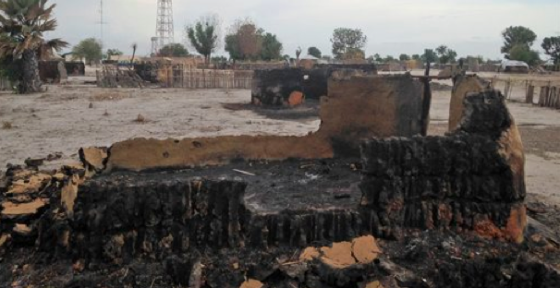 Sources from Chukudum confirmed that government troops have burned down houses and killed scores on 6-7 Oct, 2014(Photo: file)

Oct 8, 2014(Nyamilepedia) — According to the latest reports from Chukudum the government troops razed down the town of Chukudum and killed scores last night following a minor shooting between the government soldiers and unidentified militants.

The frightened population fled the town before dawn on Tuesday morning as the government forces went rampage, burning down houses and killing at least 8 civilians in the town.

According to Santo Lubari, a resident of Chukudum town, the shooting began in the town at around 9:30pm between security forces and unidentified group.

Lubari believes that the shooting was between two armed groups, however, civilians and their property have been targeted.

“sorry to say that Chukudum is being burnt down again by the same enemies of peace. SPLA soldiers fought themselves last night. We are not sure of what caused the shooting but we heard sound of guns toward the SPLA barack at about 9:30 pm” Lubari said

“The fighting stopped temporarily but it continued again in the middle of the night. That was within the barrack. So we think these are the SPLA fighting among themselves but they have killed civilians, including children and women” Lubari reiterated.

According to Lubari the residents have counted 8 dead bodies and the search continues as the scared residents scattered in various directions. Many civilians are yet to confirm the fates of their loved ones.

“Tens of people have been killed and their bodies haven’t been recovered or buried. We counted 8 dead bodies and 68 burned houses” Lubari told Nyamilepedia correspondent on phone from Chukudum.

“Someone told me he lost 3 relatives today and we are fearing for more deaths…two of his own sisters are still missing all their kids also disappeared since this morning…but the whole chukudum is in bad shape.” Lubari continued.

The residents confirmed that the government troops went house to house, setting the houses on fire without warning.

Reliable sources confirm that more than 1 000 people have taken refuge at various NGOs and Community Development Support Office compound within the town.

← SOUTH SUDAN:THE INTRANSIGENT REGIME
A SPEECH TO PAY HOMAGE ON THE PASSING ON OF UNCLE ELIABA JAMES SURUR →