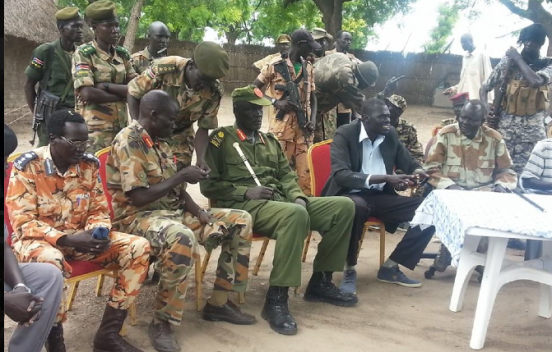 Nov 6, 2014(Nyamilepedia) — Addressing the freedom fighters in Longuchuk County on 5th November 2014, The Upper Nile State Military Governor and Zonal Commander, Gen. Gathoth Gatkuoth Hothnyang, applauded the ruling made by the court-martial of SPLA IO in Mathiang, Longuchuk County. The General Court-Martial tried in absentia the infamous President Salva Kiir plus his aides, and after finding them guilty on 4th November 2014, the court-martial sentenced them to lifelong imprisonment.

They were charged with December 2013 massacre of over 30,000 unarmed `Nuer civilians in Juba and, thus, were in absentia tried by court-martial which eventually sentenced them to lifelong imprisonment.

“This is not only the first trial ever made by military court since the war broke out in December 2013, but also a significant milestone in our endeavor to fight injustices and human right abuses,” said Maj. Gen. Gathoth Gatkuoth, adding that, for crimes against humanity they committed, Gen. Salva Kiir and his stooges deserve nothing less than lifelong incarceration.

“Convicting the culprits and imposing on them lifelong imprisonment represents our resolve to fight impunity that Salva Kiir and his cohorts enjoys for too long.” he added.

Gen Gatkuoth warned that justice must take its course and those trying to pervert justice must bear in mind that South Sudan will never again succumb to impunity.

The court-martial addresses public quest for justice, peace and genuine respect for the people of South Sudan and makes a tremendous effort to do justice to the victims of Juba massacre as well as of human right violations by brutal regime.

To achieve justice and peace, however, Salva Kiir must step down so that South Sudanese can choose a good leader to lead them, not to tribal wars, but to everlasting peace and prosperity.

Lawyers call for inclusion of GBV module in police curriculum