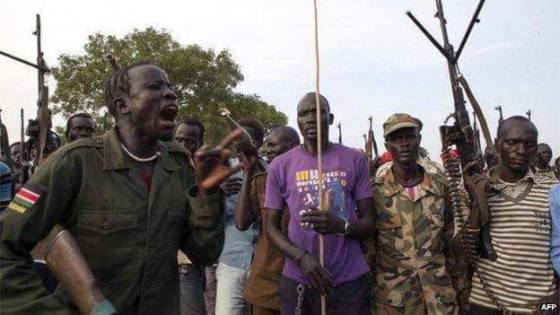 A mixed forces of SPLA-IO and white army converging at a front line in South Sudan(Photo: supplied)

March 10, 2015(Nyamilepedia) — Latest reports from the military fronts in Nasir alleged that a battalion of allied government troop that was advancing Eastwards to reinforce an isolated government base in Nasir has fallen into rebel ambushes at Gelshiel, and scattered in different directions.

“the government forces that were advancing to Nasir Eastwards were drastically scattered in forests at Gelshiel before reaching Nasir ” the SPLA-IO military spokesman, Col. Lony T. Ngundeng told Nyamilepedia Press.

According to SPLA-IO military sources, the advancing SPLA-Juba troops came from Mathiang, Maiwut, of Eastern Jikany Nuer, however, after the ambush the retreating troops are believed to have “been chased” beyond Guelguk to Renk, Paloch and Adar.

“The gallant forces have worn a lion musk and defeated the advancing government forces from Mathiang- Maiwut of Eastern Nuer of Jikany.” Said the SPLA-IO military spokesman.

“With humiliation they repulsed and scattered the government troops in different directions beyond Guelguuk leaving 40 people dead in their ranks and files, they were chased up to Faloj, Adar and up to Renk areas in Northern Upper Nile.” Col Lony continued.

According to Col. Lony, the encounter has left heavy loses, both in term of military equipments and personnel on the government troops. The SPLA-IO forces report, “our forces captured the following from the government forces:”

Asked of the fates of government troops in Nasir, Ngundeng believes that the remnants “buried at Yaarediu post” in Nasir may surrender to local population and opposition in the area, stressing that their chances of survival are limited.

“SPLM/A- IO forces in its resistance have concentrated and maintained its shelling and bombardment on the government troops in these locations, hence their only chance of survival is their surrender otherwise they will doom to their perish and ceaseless frustrations.” Lony said.

According to SPLA-IO, the government troops in Nasir have been besieged by the rebels for the last seven days, putting their survival at risk.

“While the government forces who had been buried in Nasir at Yaarediu post for the whole rainy season, had been besieged for the last seven days facing constant shelling from our SPLA forces yet their fate is not known of what they would become.” Lony said.

Col Lony believes that an aerial rescue force for SPLA-Juba narrowly escaped being shutdown by the opposition in Nasir.

“Yesterday Kiir’s tribal militias strove to send a rescue plane to save these government forces in Nasir, but unfortunately this rescue attempt ended in vain.” Ngundeng said.

“For our forces targeted the plane but narrowly escape being shut down and it flew for its survival.” The colonel added.

The government spokesman, Col Philip Aguer, and sympathizers are yet to respond to this latest development in Nasir, a town Juba holds on for nearly a year.

FULL TEXT: The Speech of President Salva Kiir Mayardit during the graduation of the first batch of the Necessary Unified Forces of the Republic of South Sudan, Tuesday 30th August, 2022, Juba, South Sudan.

Opinion: The graduation of the First batch of the Necessary Unified Forces of the Republic of South Sudan is an indication parties to Revitalized Peace Agreement are making progress in implementing the agreement fully

Opinion: What’s next after the meagre Graduation of the Unified Forces?

President Kiir pleads to NUF to obey him, not Riek Machar or their tribesmen!

Opinion: Corruption in Nilepet, Why the Current Managing Director of Nilepet is a Hyena in the Sheep’s Cloth