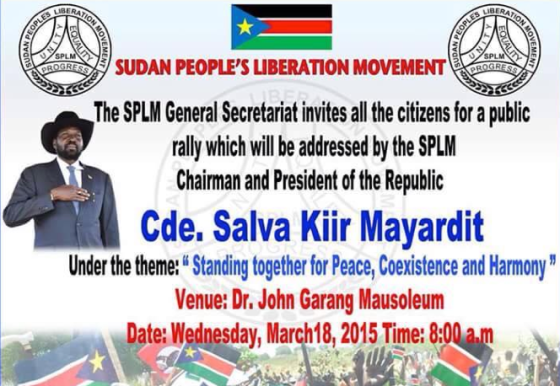 March 18, 2015(Nyamilepedia) — A broadly advertised South Sudanese rally, organized by a faction of the ruling SPLM party, under the leadership of President Salva Kiir Mayardit, has dismayed many peace loving South Sudanese people all over the world.

For the last three days, many South Sudanese have been pouring in their intuitive guesses on social media of what the guest speaker, Gen. Salva Kiir Mayardit, will present to the nation on this particular day.

The president was also expected to explain to the nation how sanctions of individuals could be a punishment to the people of South Sudan as a nation. In addition, the president was expected to elaborate on how  various elements that obstruct peace talks such as federalism, security arrangement or formal amalgamation of armies could affect a lasting peace and reconciliation.

The president was expected to present government resolutions to solve these pending issues to resolve the conflict in the country. Instead, below is the synopsis of President Salva Kiir’s speech today at Dr. John Garang’s mausoleum. 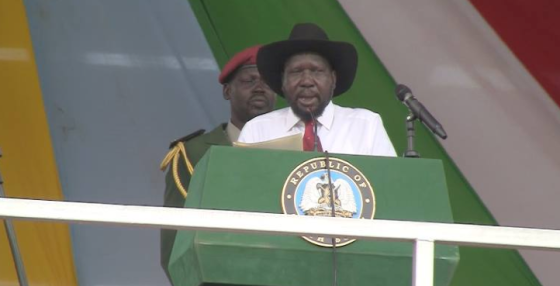 The president believes that the two principals could not reach an agreement earlier this month because of position, stressing that his former deputy “wants to be equal with him”.

“We could not reach peace because of positions.” Kiir began, and continued that “Riek wants to be equal with me and recognized as head of state. There is no country where there are two presidents”.

“Our people are suffering and if Riek had accepted then by 1 April we would have had peace” Kiir told the gathering.

Although he once recognized that he cannot bring peace alone [without Dr. Riek], he believes that presidents do not negotiate with rebels, a claim that contradicts the history of South Sudan.

“No president negotiates with rebels, but I came to negotiate with Dr Riek Machar because I want peace. But Riek Machar thinks we have become equal.” he reiterates.

On formation of Transitional Government of National Unity, Kiir claims that Machar initially wanted to be a Prime Minister but later changed his mind to demand the position of a First Vice president, which he sees as a problem.

“We could not agree on the structure of govt since August last year. We said Riek would be number 3 in the hierarchy but he refused and said he wants to be executive Prime Minister” Kiir said.

“We accepted but I said there should be 3 deputies. One from his party, other from SPLM and other goes to political parties” he continued.

“Riek again left the first idea of Prime Minister and demanded to become a first Vice President” He continued.

“Riek always want to be number two to me so that when I go outside the country he remains acting.”He reiterates.

The president, however, fears that members of his government support the idea of Dr. Machar becoming a First Vice President, saying:

“There were people who supported Riek for first vice president position so that his ppl who died in Juba are compensated. If its about compensation, did Riek compensate Dinkas he killed in Bor 1991” Kiir continues to recall the 1991 despite over 20, 000 people that were killed in Juba in December 2013.

The president turned to the people of Equatorian to support their son in his current position as the Vice President.

“They want to take Wani’s position but want if Equatorians take up arm against goverment? I told Riek we will not appease you and give you Wani’s position again.” Kiir assures.

In 2002 Dr. Riek’s faction reached an agreement with Dr. John Garang’s SPLM in Nairobi, Kenya, which united the SPLM ranks and files according to the seniority list prior to 1991 split.

This arrangement was based on compromises between the two leaders. While Dr. Riek compromised equal power sharing with Dr. Garang, which alarmed Salva Kiir to defect, Dr. Garang compromised to incorporate Dr. Riek’s vision of Self Determination.

To secure the thrown, Salva Kiir prefers the 2002 model in which Machar would be integrated into third position as a second vice president such that if he [Kiir] dies Machar will not become the president of the country.

“Riek wants the national parliament to be dissolved.. Mediators said we should increase MPs by 68 members and i agreed but Riek said he wants 250 members from his group added.” The President believes.

“I told Riek parliament will not dissolved because MPs were elected by people not us. Even if they are not doing their work. I want to tell MPs here Riek doesn’t want you because he says you doing nothing in parliament.” Kiir said.

On debts repayment, which the SPLM-IO has presented in the last rounds of talks, Juba refuse, saying:

“Riek wants the govt to pay his debts he incurred during this war. I told him when we fought Bashir, he never paid us. When we fought Khartoum we never asked Bashir to pay of expenditure.” President Kiir said.

The well attended rally that has converged civilians, army, politicians, and members of international community did not end as expected.

Although only Dr. Anne Itto, Dr. Martin Elia and Central Equatoria Governor Wani Konga spoke before President Kiir, the long speech of the president subsided the morale and cheering of many supporters.

According to many observers, the presidential speech was boring, poorly presented and failed to address the main issues in the country.

“Mr. President distorted and failed his speech terribly! Calling a certain group to stand a side and watch their country fight unecessarily war is not a good judgement. ” Wal said.

“I was expecting the rally to discuss the party’s vision and future in the midst of current challenges. So, far I’ve heard from the speeches a narration of the negotiations and points of agreement/disagreement” Warille said

“I expected some solution to the economic downturn …. are we ever going to have someone from our ‘knowledgeable’ elites on to the cause and solution to this menace creeping in so fast?” another social media analyst said.

“I personally wasn’t expecting anything new, if you heard Kiirs speech todays ago, about if anyone wants to come to government they have to sweat and bleed for it, he said those who are supporting sanctions want sanctions so they can become minister,” Aremo said.

“he extra-judicially kills people. jesh amer are not struggling with him for leadership/power. people have issues with his bad governance” Said another commentator.

“Our land has been occupied by four Countries, Sudan, Uganda, Kenya, and Egypt while we are busy killing ourselves with no reason at all.” Deng Chol said

“I knew it, is the same Dictator Salva Kiir. I’m not disappointed. He would have stayed home and chat with his wife.” another analyst, Mr. Luak said.

“You insult, humiliate, harass, detain, accuses and kill, and you don’t expect people to fight back? If you can sell the economic interest of the people to gain power to do all you are doing, if you can use peoples resources to hire foreign forces to protect your ill doings, why do you cry when others support sanctioning you? Halal aliek wa haram aliena yani? When the US calls you legit. you dance , when they say legitimacy should be connected to duties, you cry? You say you ” control” all other tribes, and you line your relatives in all posts? You think we are stupid? Go to hell, who cares?” Warille reiterates.

“He should be told that in 1991 we were not having organizations dealing with crimes and social Justice like International Criminal Court (ICC) that we have today. He is only talking of the past or what had happened during our struggle, but the world and not only him is talking today of what he had done recently in 2013 against his own people and the IL will hold him accountable and justice must be serve.” Muoch Tang, a former MP said.

Contrary, members of Salva Kiir’s government believes that the rally was a big success and the world has now heard them.

“I think we were successful, we have been understood now that these sanctions are senseless, they don’t make any meaning at all,” Marial Benjamin said.

“Why do you need sanctions at the same time you go through the world that there is a humanitarian disaster in South Sudan? And at the same you impose sanctions: you will make the situation worse because the ordinary people will suffer.” He added.

← Conversations with Daniel Wuor Joak about “The rise and fall of SPLM/SPLA Leadership” Part 1
Rebuilding Trust And Reconciliation Under Kiir Is Impossible! →

Opinion: Kiir and Machar Are Overlooking the Severity of Kitgwang Declaration in their Own Risks