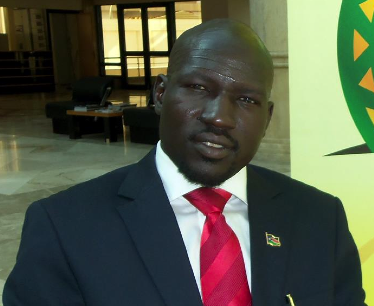 March 22, 2015(Nyamilepedia) — South Sudan’s former Vice President, the current Chairman and Commander-in-Chief of SPLM/SPLA [in Opposition] appoints Cde Yohanis Musa Pouk as his Representative to the State of Qatar.

Born in Bentiu in 1978, Yohanis Musa Pouk holds a bachelors’ from Elmergeb University, Libya, and a Post Graduate diploma from Juba University, Sudan.

In 2005, Puok was appointed by the leadership of Sudan People’s Liberation Movement/Army in Nuba Mountains as a Director of New Sudan Academic for Ideological and Revolutionary Studies which was then the main school of SPLM/SPLA cadre.

Following the signing of Comprehensive Peace Agreement in 2005 between the SPLM/A and the Sudan Government, Puok was appointed as a Director General of Radio & Television of Unity State.

While serving as a Vice President of SSFA, Puok was referred to the Office of the President as a Senior Press officer.

In 2013, Puok was re-appointed as a Senior Policy Analyst, in the Office of the President of the Republic of South Sudan.

When the conflict broke out in Juba in 2013, Puok defected to the rebels and was appointed in January 2014 as the Assistant Spokesperson, and subsequently as the Official Spokesperson of the Resistant Movement until the SPLM chairman adopted a new structure in June, 2014, after which Puok was relieved from all his duties