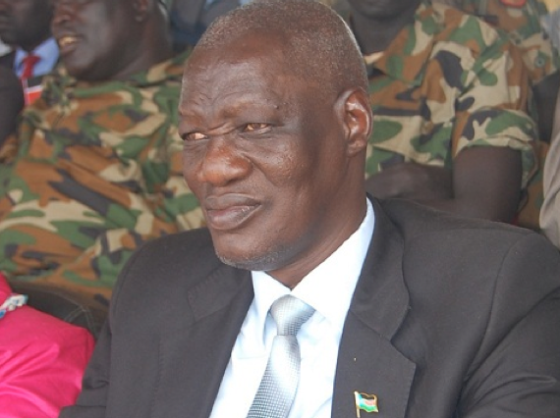 H.E. Kuel Aguer , Governor of North Bhar el-gazal, whose has been at odd with his former boss who dominate the army and the state government(Photo: file)

March 27, 2015(Nyamilepedia) — The recent development in Juba are the clear symptoms and indicators that all citizens are equally exposed to very high risks of their dear lives whether you support the government or not. If you observe careful the ongoing harassment, intimidation and threats against the poor citizens by the Killer Paul Malong Awan and his disciples, it’s easy to understand that citizens rights and freedoms are under attack and there is an urgent need for rescue mission, otherwise, all citizens will soon end up in exile or risk being killed, tortured, kidnapped, detained or even humiliated to the level of slavery by the totalitarian regime in Juba. The war is not only against the Nuer but anyone who oppose Malong, Kiir and Kuol Manyang, the uneducated vultures, who want everything for themselves but not their own children.

The innocent citizens are exposed to constants fear and physiological trauma of being killed or send to illegal detention centers without proper legal procedures for any good reasons. The people of South Sudan are led without vision and should learn that President Kiir has no vision for the people of South Sudan, not even the people of Gogrial, if so wished. Thus, a country led this greedy neanderthal will never develop even an inch of its beatiful and fertile soil under  these illiterates, Salva Kiir and Malong Awan.

The President Killer Kiir’s only primary program is to destroy this country and can be summarized as follows;-

With all the above-mentioned facts, you can all understand that Salva Kiir’s daily program is to drink alcohol, abused young girls and listening to the tribal Dinka elders to develop strategies to cause great damage, not only to his physical capacity but also to thinking capability.  Kiir’s lack of vision and program toward South Sudan has allowed the most notorious Killer Paul Malong Awan to imposed himself as Chief of General Staff and today became Prime Minister of the Republic of South Sudan with all executive powers and Salva Kiir is left with only ceremonial powers and his alcohol to be a full-time drinkard, abuser and exploiter of teenagers while the Dinka council of elders strategize genocides against innocent civilians and to enjoy the fun from the land grabbers and corrupt elements within his own tribesmen.

The Dinka Council of Elders’ overall objective is to design policies and strategies to make more money through killing of innocent South Sudanese citizens using Salva Kiir as the ladder for the deadly projects.

The citizens of South Sudan today witnessed the brutality and deadly side of Salva Kiir regime on innocent citizens who become victims of tribal elites and disciples of Gen Paul Malong .The Killer Paul Malong Awan today appointed the most notorious killers from Lake State namely (Marial Nuor and Marial Chinung) whose mission is to kill anyone opposing the King Paul Malong Awan in Juba.

The Governor of Northern Bhar el gazal has today became the victim and forced to under house arrest from Paul Malong Awan because he was trying to reform and make development in the State after long practices of corruption and mismanagement of government resources by Malong.

The Poor journalist Christopher Michael whose job is to interview government officials end up being kidnapped for interviewing H.E. Kuel Aguer and his whereabouts remain unknown, only Paul Malong Knows.

Gen James Hoth former Chief of General Staff and the respected Gen Mach Paul escaped for their dear lives after revealing the truth about Ethnic Cleansing against the innocent Nuer civilians in Juba by Malong and his cohort.

Gen Pieng Deng is under close supervision from the security agents loyal to Paul Malong Awan and his safety remain at very great risk.

Finally, Comrade Agel Machar escaped for his dear life from the regime and ended up in the rebellion to rescue this country and its people from the ongoing mass killing and dictatorship under Salva Kiir.

The people of South Sudan should know from today that Salva Kiir is just a symbol of Dinka leadership and has no power to protect citizens from ongoing killing and disappearance in the hands of this notoriously self imposed Prime Minister. Kiir cannot afford to release H.E. Kuel Aguer, the Governor of Northern Bahr el ghazal from House arrest and his State his being ruled by Paul Malong in Juba. Kiir has no power to release political advisor, who over stayed at illegal detention center and Kiir will not be able to set free the poor journalists, who was kidnapped for no good reason and keep at illegal detention cells without proper legal procedures by Paul Malong Awan.

The question to all citizens is what is the future of this Country under the most notorious Killer Paul Malong Awan and Drunkard Kiir Mayardit?

I believe the citizens of South Sudan, though under this terrible living condition, are still responsible to free themselves and their beloved country from killing, intimidation, exploitation, dictatorship and totalitarian under Kiir and self imposed Prime Minister Paul Malong Awan at all cost.

The people of South Sudan should not allow themselves to held hostages and be enslaved in their own Country, South Sudan. This is the time for a wake up call to free South Sudan from Killer Kiir and Killer Malong.

This is the time for the citizens, who lost their lands and properties to grabbers under Kiir and Malong, to reclaim their properties back at all cost.

This is the time for those whose children, who were forced to child soldiers and died defending Malong’s personal interest to say no and enough is enough.

This is the time for the citizens, whose loved ones were killed in Juba and other major towns in South Sudan, just because of Malong’s self-imposed war to sacrifice to free them and held Malong accountable.

Finally, this is the rights time to force both Killer Kiir and Killer Malong out of power using both Military and popular uprising from Nimule to Bentiu, from Aweil to Malakal, from far Raga to Renk. This is the time to sing a song down, down Salva Kiir and to hell, to hell Paul Malong.

The writer is concern South Sudanese Activist and can be reached via lualmagok@yahoo.com

← Fighting Erupted in Ayod County
South Sudan: When It’s The Dead That Represents The Nation. →

4 comments for “H.E. Kuel Aguer , Governor of North Bhar el-gazal Detained , Christopher Michael Kidnapped , Agel Machar Rebelled and What are you Waiting for Under Killer Kiir?”