SPLM/SPLA Head Of Delegation To Pagak Conference Thanks Splm Members In Calgary Alberta.

March 28, 2015(Nyamilepedia) — I want to take this opportunity to thank and appreciate our SPLM committed and dedicated members for taking their time to attend SPLM/SPLA Pagak Conference. I am proud of your determination to spread the good news from our leaders that was conveyed in Pagak between December 6-12, 2015, which came with several resolutions as you were briefed on. 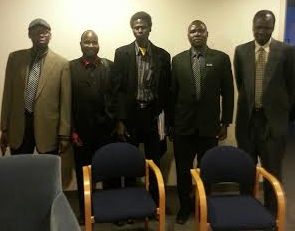 SPLM-IO Mission in Canada post for a picture at Calgary Chapter….

I also give thanks for the leaders and members who attended the briefing but were not listed here.

Further more I want to give thanks to Pastor Joseph Makuey Nhial and his Church of First Grace Lutheran Church in Calgary for offering me space for briefing. I also give thanks to those who didn’t make it to the conference for various reasons.

Now that you are armed with the knowledge of our movement and SPLM/SPLA policies and resolutions. You are good to go to spread and explain our position as SPLM/SPLA Resistance Movement and our position in the IGAD Peace Process to Canadians and our South Sudanese Canadians.

For those who missed the briefing am scheduling more for various communities, Community and Religious Leaders, Community organizations and many more across the country.

I want to take this opportunity to salute our Freedom Fighters and our Chairman and Commander in Chief of SPLM/SPLA, Dr. Riek Machar Teny Dhurgon, for the victory and capture of Ayod on March 27, 2015.

Thank you very much for your support and patriotism.

Struggle Continues and Victory is Certain.