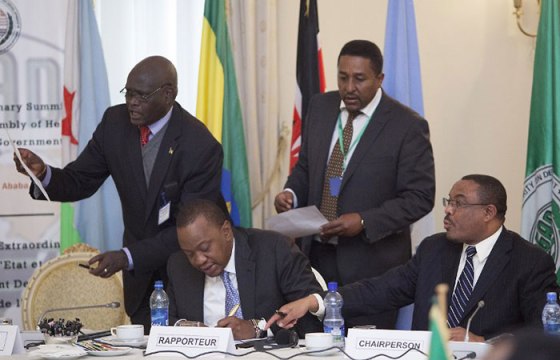 The IGAD Heads of states and government holding the 27th Extraordinary Summit on South Sudan in Addis Ababa, Ethiopia.(Photo: file)

April 4, 2015(Nyamilepedia) — South Sudan now in the second year of its new civil war, the country has since been a hotbed for militant politics thus making it one of world’s spots that has come to stay as reminder to all humanity that,” Do Unto Others as You Would Have Them Do Unto You”, or else we are all doomed to fail.

This trend has now just accentuated more than ever before as vivid diplomatic shuttles involving delegates from the United Nations Security Council (UNSC), the European Union, the Troika (USA, UK and Norway) begin converging on the Ethiopian Capital City, Addis Ababa in a last attempt to hammer a peace deal for the world’s newest country.

It is for this important reason that all ears are now beginning to be turned towards that direction with everyone hoping to get hold of a first-hand news on what is seen as the likeliest most inclusive participation ever by the members of the human race to bring sanity to the devastated citizens of South Sudan.

The  imminent outcome of the new initiative on peace in South Sudan is likely produce all that is needed to rekindle the hope of a better future to the country and its ten million people.

Optimism among a people traumatised by wars, often does come easily especial when these wars only stop only to start another. But gauging by the new dynamics involved in the new IGAD PLUS initiative that has now officially replaced its predecessor, the failed and much compromised old, Museveni –Dominated IGAD-ONLY Initiative, these are all set to change.

For the first in a long while a fresh hope of a new breeze of peace to the war torn South Sudan is becoming more of a reality than ever before, although real mountains of differences between the various warring factions remain virtually unaddressed.

The most important learning curve in this whole process lies in the fact that it was IGAD that came out openly to accept and acknowledge the reasons behind the failures of its first solo attempt.

Hence, the new initiative by default must be different from the first one both in substance and spirit. My readers will agree with me that with the replaced initiative in full swing, the old IGAD initiative represented the much dreaded top down approach.

Much has already been said about the cos and pros of the Old IGAD Solo initiative and why it had failed to yield any fruits of peace. So could the learning curve here be the organization’s own admittance of inborn conflicts of interest that compromised it previous one year’s attempt when on several occasions it actually knowingly or unknowingly tried to undermine much of the sensitive prerequisites for  arriving at an all binding peace deal, by being conspicuously pro the government of the day in Juba ?  This we will find out when the new IGAD PLUS Initiative officially convenes in a few days’ time.

Of Course unappreciated also in the old IGAD solo initiative were damages done to IGAD’s image by  the conspicuous  hands of the Ugandan president Yoweri Museveni, which in fact were  all over the place and actually at times too strong to be contained nor ignored .

All the above could be history now, for the news coming out of the Ethiopian Capital over the past few days has all the elements of a world community united for the first time to talk in one voice with the sole intention of salvaging South Sudan from the imminent demise that its failed leaders have chosen for it and its people.

Those of you who don’t know that a new dawn is likely to dawn on South Sudan very soon if all its friends act in good faith, should now prepare for the good news to come soon.  You are all called upon to appreciate that something serious and equally great is now brewing in Addis Ababa in a way to tackle the 14 month old civil war in the new country of South Sudan. Africa and the world want to act on South Sudan and they want to act now!

So please instead of putting hurdles in the way of a just and inclusive peace, why not help them in this noble mission? After all the independent sovereign state of South Sudan is still to install in place it’s “first ever elected president, government and parliament”.

Stop killing one another over these rotten and rudimentary structures that you inherited from Khartoum. It is time we start the new independent Republic of South Sudan, with new philosophy, new vision, new institutions and above all new spirit.

A mission to stop bloodshed in our country is on the way. It’s meant to put an end to impunity by holding to account all abusers of human rights and spoilers of peaceful settlement and stop a whole generation of South Sudanese young people from being again reduced to mere fodders to feed a brutal war, when there is no winner in sight.

The dinosaurs of the geriatric Jieng “Dinka” Council of Elders and their clown Michael Makuei Lueith’s are aware of how the new initiative is likely to blow the top off their campaign to replace the aspirations of the people of South Sudan for a democratic republican system with their day dreams of a tribal fiefdom.

This is the reason why these spoilers of peace are finding it all too difficult to shut up their big mouths. You saw them shouting, yelling and wailing all over the place, didn’t! I bet you did.

Well it has long been said that,” The best way to suspect that an eminent natural incident of exponential magnitude e.g. earth quakes, tsunamis, total eclipses of the sun or sometimes even the collapse of dynasty or an end to a tyrant, is to watch out for signs of fear, restlessness and intense panic among animals like birds, cats, dogs or even the wildlife”.

In as far as South Sudan stands now, all you need to do is watch the behaviours of those believed to have perpetuated the ethnic cleansing of December 2013 and you can tell that their fates is about to be sealed once and for all.

In other words watch out for the reactions from Michael Makuei Lueth, the mouth-piece of the genocidaire regime in Juba and read between his lips that the regime is on real fire.

You should also watch out for reactions from the tribal & spiritual leaders of the same genocidal regime – its “Supreme Council” of the Ayatollahs – the so-called the Jieng “Dinka” Council of Elders.

If you watch them keenly, they are becoming jittery than ever before. They are rightly now the Jieng “Dinka” Council of Panicked Elders, for the fate set up for them in the AU Report, is something even a million centuries of history won’t wipe away!

It has now been confirmed beyond any reasonable doubt that the United Nations Security Council (UNSC) remains firm in its threats of sanctions to the parties which include asset freezes and a travel ban on individuals obstructing the peace process.

Again information coming from a reliable source in Addis Ababa suggests the next round of South Sudan peace negotiations to resume between 10 and 18 April in Addis Ababa.

As a deadly blow to Michael Makuei Lueth war of words, another very reliable source from Addis Ababa also maintains that the coming talks will  definitely  see the  IGAD along with African Union, UN, EU, Troika and China as full participants and brokers.

The most unwavering part of the Addis Ababa new IGAD PLUS  brew so far  is  that,  this new initiative  comes under a completely new expanded mediation mechanism and is intended to remain so for the rest of its life spun regardless of  whether any of the protagonists likes it or ot!

Not only that, but the source also confirms that the IGAD-PLUS mediating body  has prepared a draft proposal for a final peace agreement with  the AU Report and its recommendations forming an integral part of its approach to transitional justice.

This forthcoming peace negotiations would be the last opportunity for South Sudan’s two warring factions to restore peace to the young country.

More interestingly is the revelation that both leaders’ president Salva Kiir and his former deputy turned armed opposition leader Riek Machar, are believed to fully accept the new draft proposal by the regional Intergovernmental Authority on Development (IGAD) and strike a final peace agreement during the next round of peace talks in mid-April.

Both sides are expected to sign an agreement to stop the war, form a Transitional Government of National Unity (TGoNU) with clearly spelt commitments to an equal share of power and power within a federated system of government  and carry out reforms?
So what will happen in the event that the two leaders and indeed the two warring sides refuse again to sign a deal?

It that event the stringent side will only has itself to blame. The immediate steps to be taken by the IGAD PLUS would be to push for an urgent and fast tracked Arms embargo, ban on foreign travels and freezing of assets for top officials and military generals and other noxious ethnically motivated groups e.g. the Jeing “Dinka” Council of Elders and the many other negative regional and tribal organisations operating across the political divides and beyond.

The neighbouring IGAD member and non-member states have also been promised sticks and carrots to cooperate in the implementation of these UNSC sanctions and embargos.

A well place African dignitary recently said that since the beginning of the year 2014, the African Union has recognised major areas of interventions to retain peace in Africa.

These are the Ebola epidemic in West Africa, Boko Haram of Nigeria, Al Shababa in Somalia and Kenya and now the civil war in South Sudan.

On the other hand the international community is more than willing to see this continental organisation scores  its first ever success stories since it replaced its predecessor,  the much criticized Organisation of African Unity (AOU) – an organisation better remembered for siding with dictatorial leaders in the perpetuation of oppression in the continent !

So are we about to see a radical change in the regional, continental and international politics in favour of hands on the ground to stop the bloodletting in South Sudan, reboot (overhaul) the country and start a new page of stability, accountability and human rights respect and reinstate the dream of a better life this highly promising part of Africa!

Author: Justin Ambago Ramba. A Concerned South Sudanese and a voice for the millions who ate voiceless in the country. He can be reached at justin_ramba@aol.co.uk

34 comments for “Something Serious Is Brewing In Addis Ababa In Spite Of The Teeth Grindings In Juba.”