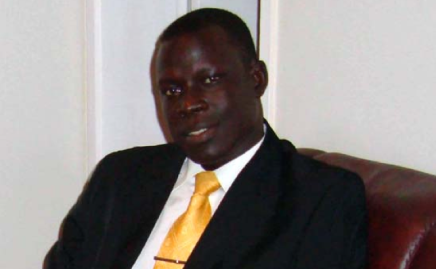 April 5th, 2015 (Nyamilepedia)- When faced with choice between two evils, choose none even if one of the choices is a lesser evil in a utilitarian term of “principle of double effects”. This is the bottom line of postulates of Christian morality. Hence, the Democratization and Human Rights Independent Journalist, Mr. Peter Gai Manyuon, is advised to note this about Dr. James Okuk because the biography he provided is purely propagandist and out of anger against for no any substantiated apparent justification.

Mr. Peter would have not looked nonsensical had he remained general without getting specific about the personality and academic qualifications of Dr. Okuk, which he is ignorant about. Also it would have been less stupid had he consulted the Library of University of Nairobi to get the correct title and content of the thesis and be informed whether it was given to South Sudanese intellectuals globally to critique. University of Nairobi is a no-joke academic institution. If it awards a student a PhD degree it means it.

Dr. Okuk was ranked one of the best and youngest of his batch, supervised for four years by Prof. Joseph Nyasani and Associate Prof. Dr. Karori Mbugua who are well known for their intellectual keenness in the area of political philosophy. Three of his colleagues failed to make it in time as they stumbled in defending their theses in front of tough external examiners.

Regarding my relationship with Dr. Lam Akol, I don’t need to waste time on it because it is a blood and lineage link that no human being can take away. Dr. Lam is my paternal uncle from Doleib Hill (Katum Ted as called by Nuer) in Panyikango County of the Royal Shilluk Kingdom in Upper Nile State, and with pride of what he is, both intellectually and politically. Dr. Lam is an honest and genius hardworking astute politician who doesn’t entertain lies in order to cover the truths that need to be known with time.

However, what I write is my own intellectual property with copyright, and what Dr. Lam writes is his. If our writings happen to converge at some instances then you need to treat them as incidents of truth coincidences worth noting. Dr. Lam cannot accept to write an article, leave alone a thesis, for another person. Get this well from me if you have not got the chance to know him very closely.
Any way let me get back to what is at the stake without unnecessary distractions as it is said that small minds find consolation in discussing people while big minds find delight in discussing ideas.

First, Mr. Peter Gai, should know that shame is the destiny of liars and evil-promoting propagandists, not those who have the courage to revere and say the truth even while in the lion mouth.
Secondly, any human life matters because it is a sanctity matter; no laughing and no celebration. That is why lies shouldn’t be tolerated on loss lives of people in South Sudan whether they are Nuer members or non-Nuer ethnicities. The lie on above 20,000 Nuer members killed ‘genocidedly’ in Juba on 15, 16, 17 and 18 December 2013 shouldn’t continue to be tolerated because this is not a laughing matter.
We should be accurate on death counts and know what constitutes ‘genocide’ strictly as defined in ICC Rome Statute and in the UN ocuments. If there are people who thrive or want to gain power on dead bodies in South Sudan, I think it is time to tell them ‘enough is enough’ against this evil tactical practice.

Thirdly, we don’t need to crack our heads on this matter because we can come up with some basic understanding based on simple logical calculus. It could go like this:

3) Subtract the latter (2) numbers from the former population

4) Subtract the number of the Nuer members who managed to escape from Juba via UNMISS camps or through other routes.

5) Add the number of the Nuer members who are still camping in UNMISS at Jebel in Juba now to those who went back to their homes and to those who have managed to escape from Juba to other safer places inside or abroad.

6) Subtract the comprehensive addition (5) from the Nuer population in Juba before 15 December 2013 (1) and you can get to a conclusion that the actual number of Nuer members who targetedly got killed in Juba will not be above 20,000 as it has been propagated by SPLM/A-IO and their sympathizers.

Fourthly, what is known, though not presently said, is that the biggest death in Nuer tribe came from the very Nuer politicians and liars (i.e., politikach in Nuer Language) themselves who mobilised the White Army and other Nuer sectors to die in masses in front lines of the current senseless war of power greed between the cursed SPLM leaders?

The Nuer tremendous loss to young men in front lines in and around, Bor, Malakal, Poktap, Nasir, Ayod, Bentiu, etc, is very painful but it is the consequence of taking up arms against a constitutional government. The same goes to the Dinka, Shilluk and other Sudanese who were killed by the Nuer members in the course of the current war.
That is is why the bashing of both sides (government and rebels) in the current war in South Sudan is correctly justifiable.

Yes, any war criminal on humanity whether he hails from Dinka, Nuer, Shilluk or any tribe in South Sudan should face the force of criminal law (nationally or internationally) in reparation to the innocent victims but not soldiers or armed groups in front lines. That is, rebels and other war inciters and violence pursuers should never be treated as victims because they are equally the selfish perpetrators who have harmed the Republic of South Sudan in the situation it is today.

Regarding the fact of who have been occupying lands of other people in South Sudan, we don’t need lectures but practical examples on this matter. It was the Nuer who have been occupying Tonga Nyijwad (Pangak as they renamed it), Doleib Hill, Obel, Ashabinil, Wic Liel (Wic Mabor as they renamed it), Adhithiang, Warjwok, etc of the Shilluk Kingdom since the time the Nuer militias allied themselves with Jellaba.

Thy even wrote to Upper Nile Governor without any shame to allow them to have their county names and chiefs stationed within the Shilluk Kingdom. On the other hand, the Dinka tried to annex Atar, Obang, Wic Pig, Anakdiar, Wic Uluth, Nyigiir (Bilthiang as they renamed it), Thangrial, Melut, etc but didn’t occupy most of the claimed annexes as the Nuer did.

Bur thanks to Kiir-Riek current war of power that has flashed the Nuer out of the Shilluk lands. It will not be an easy matter for them to reoccupy those lands again. The Dinkas of Upper Nile have been good neighbours of Shilluk and they will dialogue it out in a peaceful manner to resolve the conflicts on the claimed lands. There will not be any intention of genocide between them. The Nuer needs to learn the value of dialogue in the civilized world. Violence will not help them!

Finally, you would have better left the response to Mr. Stephen Par Kuol because we know each others. But for your information, he has not been an Ambassador yet, perhaps in future if things went well with him. The fact that he kept quiet is an indicator that he got cornered on not telling the truth as it should have been told. He know his bias and it is understandable to some of us.

Dear Mr. Peter Gai, know that I don’t claim to be a lecturer in Juba University. I have been lecturing there actually and graduated two batches, so far so good. Take time to go around and you will be amazed of my students in the real world who will tell you how they appreciate my nationalistic contribution in teaching them in an excellent manner. Some of the finalists whose research projects I supervised hail from Nuer tribe and they will admit to you how I directed them to write objective research papers using academic methodology.

This is enough to tell you that I am already working and contributing concretely and positively for the well being of the Republic of South Sudan. Why should a worker be under pressure of seeking for a work? Illogical, isn’t it? Some of us respect law because it is safer to do so. That is why we cannot join Dr. Riek’s rebellion or form one even when the SPLM leadership behaves badly. We believe in non-violence approach in resolving conflicts. You will one day come back to where we stand and you will then understand it better.

Neurologists have no use to truth-tellers and sincere intellectuals. It will be waste of money to see them, but if you think you need to because of the anger and lies that came out in your thoughts against my article, you may try. Perhaps some of us who are the willing are doing the impossible for the ungrateful. After all, stay well!

Dr. James Okuk is lecturer and public analyst in the area of politics. He lives in Juba and can be reached at okukjimy@hotmail.com

← Redline: Dr. Riek Machar Is a Symbol of Nation Unity And Must Not Quit !
SPLM/SPLA-IO: Recent Government Negotiation Document Does Not “Narrow Gaps”! →

26 comments for “Why Dr. James Okuk Should Not See the Neurologists! A Response to Journalist Peter Gai Manyuon”