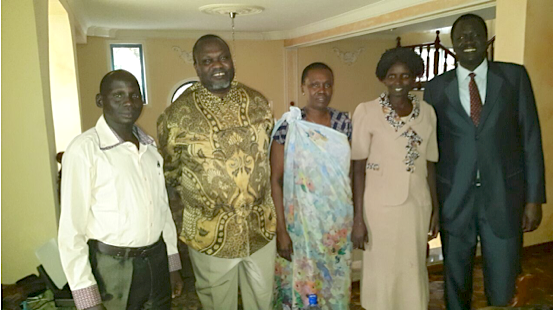 We brought along with us greetings to the Chairman from the Governor of Adar State, Major General Saddam Chayuot Manyang, Division 5th Military Leadership led by Brigadier General James Khor Chuol Giet and the citizens of Adar State.

The meeting was meant to brief the Chairman on the General security situation of North East Upper Nile (Adar State), the military achievements scored by our gallant SPLA Forces of Adar State and the administrative issues solved and those that need to be tackled by the State government.

Moreover, the Chairman was also informed and briefed about occupation of Mangok Payam of Kaijak County (Adar State) for two weeks by the government forces. These forces were terribly defeated in the battle of Mangok on 31st March, 2015, now they are on the run and our forces are pursuing them up to Guel Guuk. It was also brought to the attention of the Chairman that there is a high level of cooperation and coordination between the State Government, the State Military Leadership and citizens of Adar State as well as the sons and daughters of Adar State in Africa and abroad and their resolved to stand united, defeat and eliminate the forces of Salva Kiir in North East Upper Nile State once and for all.

Nevertheless, we stand for peaceful resolutions of the conflict and hence Adar State fully support the IGADD– Plus and African Union led Peace Initiatives. Besides, we welcome the involvement of the West, especially Trioka in order to bring South Sudan’s conflict into a peaceful and speedy end.

The State government, the Military Leadership and the citizens of Adar State also recognized and appreciated the tremendous job done by the sons and daughters of Adar State abroad by contributing financial resources which are used for repairing cars, fuels/gases for vehicles and even buying shoes for our freedom fighters (soldiers). We thank you for what you have done and we also urge you to continue doing the same as long as the war is not brought to an end. It’s just a matter of time, we are going to defeat and destroy the government of dictator Salva Kiir so that we create a peaceful, democratic and Prosperous Federal Republic of South Sudan

Thank You and May God blesses you

← South Sudan Civil War: The International Geopolitical And Geostrategic Impacts On The Horn Of Africa
Has General Kiir Ever Accomplished Anything? →