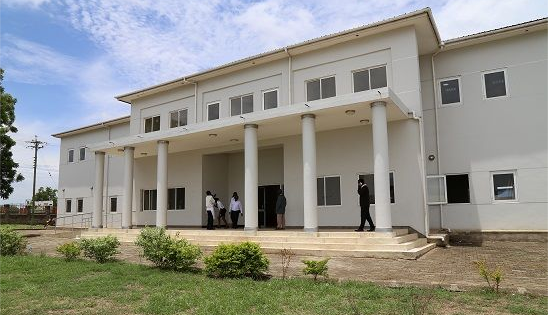 The Juba University School of Law, an institution that will instill a sense of justice and fairness to the students, and strengthen the rule of law, democratic governance, and access to justice for all. The 6.5 million dollar facility was jointly funded by the United States and Norway, members of TROIKA(Photo: US Embassy in South Sudan, Juba).

April 14, 2015(Nyamilepedia) — I am happy and honored to be here today, a day of hope for the future, as we dedicate the new University of Juba College of Law.

We are here today to celebrate a new beginning. Through the contributions of Norway and the United States and the efforts of the United Nations Development Program, South Sudan has a shining new facility to teach its future lawyers and judges the practice of law.

Law is not just a profession or a means to make a living; it provides justice to a society. It ensures that those with power follow the rules; it allows businesses to operate with confidence, people to build homes, and disputes to be peacefully resolved.

At its best, a law school is a place to develop tomorrow’s leaders – leaders who are steeped in the rule of law, who understand both the role and limits of government power, who respect human dignity and champion the cause of religious, political and ethnic minorities when their rights are threatened by the majority.

Reflecting on the early developments of our own legal system in the United States, America is fortunate that its lawyer Founding Fathers had a deep appreciation for rights and liberties and enshrined these principles in our system of government. For example, in the Declaration of Independence, Thomas Jefferson announced the conscience of our new nation when he proclaimed that “all men are created equal, that they are endowed by their Creator with certain unalienable Rights that among these are Life, Liberty and the pursuit of Happiness.”

James Madison – another lawyer – was instrumental in writing the Constitution of the United States. He is best known as the “Father of the Bill of Rights” for drafting the first Ten Amendments to the Constitution. The first of these amendments – protecting freedom of religion, freedom of expression and the right of media to be free from government censorship – has provided inspiration for free People the world over as they have endeavored to build free, democratic societies in place of the repressive monarchies and dictatorships that preceded them.

But the American experience also shows that high principles sometimes do not match reality. The American experience also has lessons regarding the disastrous consequences to society when lawyers misuse their power to hijack government and enact laws to protect the powerful at the expense of the weak. Jefferson and Madison were both slave-owners, despite their lofty rhetoric and advocacy for liberty and equality.

The government they created protected the rights and freedom of white men – but no one else. It took the unlikely election of another lawyer named Abraham Lincoln to the Presidency more than eighty years after the Declaration of Independence was signed, and a bloody Civil War, before America would free the slaves and begin to renew its commitment to its founding principles; a new birth of freedom.

Even then it took nearly one hundred years for the promise of freedom and equality to become more than just words on paper. Lawyers like Thurgood Marshall ensured that justice would reach all people, that words would match reality; when he argued the cases in front of the United States Supreme Court that ended legal segregation.

Although we are not here today to discuss war and peace, it is impossible to mention the American Civil War – our darkest days – and not reflect upon the current situation in which South Sudan finds itself. The sufferings of the people of this country break my heart. We all know there have been too few days of hope recently in South Sudan. The crisis that began on December 15, 2013, drags on, and the endless rounds of negotiations have brought us nowhere nearer to peace than when the fighting began. We hope and pray that the political leadership of South Sudan both on the government side and on the opposition side will find the strength, wisdom, and courage to make the compromises needed for peace.

When the smoke clears and peace finally comes, it will be up to the young lawyers who are educated in this school to themselves rebuild society and the institutions that have been destroyed by this senseless conflict. 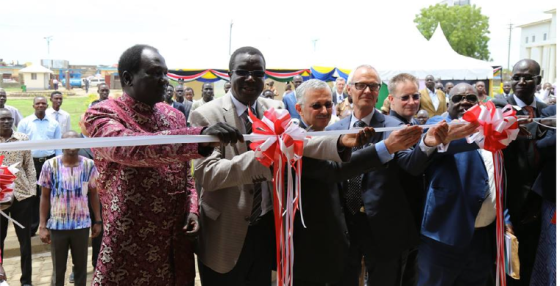 A law school has a role to play in the continuing legal education of all in the field of justice. As a result of years of neglect under Sudan, South Sudan came into existence without a strong legal foundation. The decision to implement a legal system based upon common law, using English language, rather than Sharia law, using Arabic, as exists in Sudan meant that many of South Sudan’s lawyers, prosecutors, and judges who were trained in Khartoum need to learn an entirely new system of law.

The College of Law can be at the forefront of efforts to ensure that all lawyers and judges appreciate and understand the nuances of this new legal system. I hope that the College of Law will take it upon itself to be a resource for South Sudan’s entire legal community as it evolves from the old Sudan system into a new South Sudanese system.

But I also hope that those who study here come to understand that law is more than just a set of rules and statutes, things for lawyers and judges to argue about. At its heart, a country’s legal system exists to provide justice to a society. It protects the defenseless, and compels those with power to follow the rules and punishes corruption. It creates the architecture that allows businesses to operate and grow with confidence while also providing a mechanism for those who are wronged or exploited by them to hold those same businesses accountable. A good legal system provides a framework for disputes to be peacefully resolved. At its most basic, it establishes the rules required for members of society to coexist in peace and security.

So although we are proud of these buildings and the hope they give us for the future, much more will be required in order for them to help South Sudan become a country committed to the rule of law.

Among other things, the government will need to provide the funds required to run a first class college of law. Administrators will have to make sure funds are used wisely and that competent, trained, and dedicated instructors teach South Sudan’s next generation of lawyers. Instructors will have to hold their students to the highest standards, providing leadership, mentoring, and training. Students will need to dedicate themselves to their studies.

But above all, if democracy, freedom and fairness are going to take root and grow in South Sudan, both instructor and student alike will need to remember that the rule of law is the proposition that a nation is governed by laws, not by men.

If all of this is done, I am confident that South Sudan will find its own Jefferson, Madison, Lincoln, and Marshall. I am confident that those who study here will help lead the country forward to better times. This College of Law will play a huge role in the continued development of South Sudan as it eventually moves towards a permanent constitution following a Transitional Government of National Unity.

I am hopeful that the students who study here will, like Lincoln, do everything they can to give South Sudan a new birth of freedom.

I thank you for inviting me here to speak today and wish all who use these new facilities the best. Thank you.

← SPLM Leaders Travel to the United States!
Breaking News: Son of a Governor and Member of National Security Joins Rebellion! →