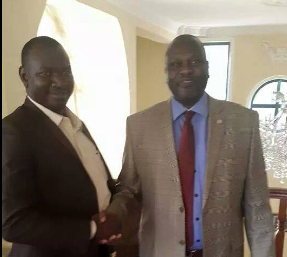 April 15, 2015(Nyamilepedia) — Capt. Joseph Clement Wani Konga, the son of Central Equatoria Governor, who visited the Chairman and Commander in Chief of SPLM/SPLA in Addis Ababa, Ethiopia, is passionate about change in South Sudan.

According to Dr. Riek, the young Captain is so optimistic about change:

“I was visited by Cde Joseph Clement Wani Konga and he told me that South Sudan needs change. He was so optimistic about change.” Dr. Machar say.

“The rampant high level of insecurity, injustice and corruption are clear symptoms of a country that has lost leadership and direction”. Capt. Wani pledges.

Juba has witnessed a number of death in the last few days including members of presidential protection unit, and national security.

2nd Lt. Akok Kuol, a close protection officer, and his colleague, who served in South Sudan Security Services, were slain by unknown gunmen on Sunday.

Akok has been laid to rest in his home village in Awiel West, Northern Bahr el Ghazal. Other insecurity cases involve foreigners and civilians.

The son of CES governor appeals to South Sudanese to “join hands and safe the nation”.

← The Cracking Salva Kirr’s Regime
Minutes of the 4th Convention of the NCDS Held on 28th March 2015 at Des Moines Iowa, United States of America →