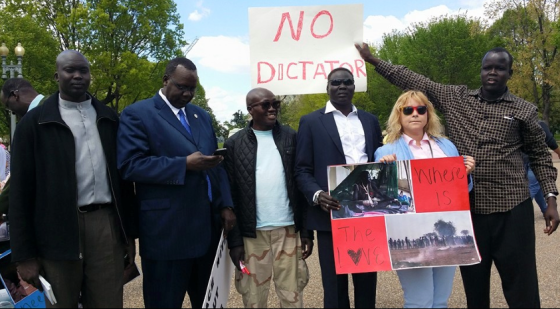 April 28, 2015(Nyamilepedia) — The conflict in South Sudan is a direct result of President Salva Kiir’s failed leadership, lack of vision for the country and his personal ulterior motive to eliminate political opponents and suppress the voices of democratic change in the country.

Between 2011 and 2013, Kiir trained and equipped over 15,000 tribal militias from his tribesmen to perpetuate genocide in South Sudan. In December 2013, Kiir unleashed his tribal militia which resulted in the killing and massacre of one ethnic group (Nuer) in Juba. Within one week, over 20,000 souls were lost. Rampant corruption, tribalism and nepotism, dysfunctional security organs, killing and looting with impunity, and wide spread insecurity throughout the country are other factors that contributed to the conflict. Weak institutions of governance, lack of socio-economic service delivery, lack of vision and direction after independence and ultimately, unmanageable party disputes within the SPLM Party was what led to the violence on December 15, 2013.

President Kiir has lost legitimacy to lead the country by committing the massacre of December 2013. He created the mess in the country; hence he cannot undo what he did. President Kiir is a symbol of genocide, tribalism, corruption, failed leadership and Kiir cannot effect genuine reconciliation and healing.

SPLM/SPLA is calling for a speedy and peaceful settlement of the conflict through IGAD Mediation Forum. The peaceful settlement must include comprehensive reforms in governance including operationalization of federalism during the transitional period, democratic transformation of the country for sustainable peace and development, Economy and Financial Management and reforms Judicial, Civil Service and Security Sector.

SPLM/SPLA would like to urge the US Government to lead from the front. Urge President Barak Obama to declare President Salva Kiir illegitimate for the Juba massacre which resulted in the killing of over 20,000 innocent ethnic Nuers like he declared former President of Ukraine Viktor Fedorovych Yanukovych illegitimate for his role in the deaths of less than 200 demonstrators in February 2014.

SPLM/SPLA stands for Justice and Accountability to end the era of impunity and urges for the release of the report of the African Union Commission of Inquiry on South Sudan and urges for withdrawal of all foreign forces from the South Sudan for peace to return to the country.

SPLM/SPLA supports the establishment of an ESCROW account to deny Government of the Republic of South Sudan (GRSS) surplus oil revenue for buying arms to continue the war, supports UNSC resolution 2206 imposing targeted sanctions on individuals obstructing attaining peace in South Sudan and also supports the implementation of the executive order 13664 signed by President Obama.

SPLM/SPLA urges the International Community not to forget Humanitarian Assistance (health, education, food and shelter) to the war affected areas of South Sudan and the famine stricken areas of the country.

Finally, the SPLM/SPLA reiterates its commitment to the IGAD-led Mediation Peace Process and stands ready to return to the negotiation table whenever the request is made.

SPLM/SPLA Representative to the United States of America

13 comments for “Press Statement: The Current Conflict In South Sudan.”

TENY: Unified Forces won’t be graduated due to lack of food