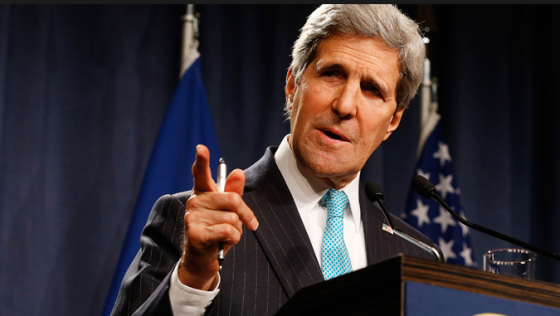 US Secretary of states, John Kerry who is visiting East African region, has announced $5 US dollar to be used to establish a hybrid court for South Sudan’s conflict trials …

May 05, 2015(Nyamilepedia) — Frustrated by the conflict and violations of human rights in a country USA midwifed, the United States of America opts to work with the people of South Sudan and members of the International community to restore peace in the world’s youngest state.

Responding to an interview by the “eye radio”, the Secretary of States, Mr. John Kerry, made it clear that the USA and partners are “fed up” with the “so call leaders” who have neglected their responsibilities, and calls on the South Sudanese people to act accordingly.

“We are fed up with avoidance of responsibilities by the so called leaders of this conflict, on both sides,  and it is time for people to act responsibility” said John Kerry, the Secretary of States.

Kerry strongly denounces the continuation of war, citing that it destroys not just South Sudan but the region where the refugees are seeking refuge.

“what is happening is disgraceful, it is destroying not just the country, this newly born country in which all of us had much hopes, and such sense of possibilities,  but it is doing huge damage to the region where we have enormous number of refugees coming into Kenya and other places” Kerry added.

While visiting Kenya, which has been hit hard by alshaab on his way to Somalia, Kerry warns that the South Sudan conflict brews extremists and makes fighting Somalian’s Alshaab harder.

“it is very disruptive, and it’s slows down the progress of efforts to fight back against Alshaab, against other terrorists standardise, it helps create more extremists, actually. It works against everybody’s interest” Kerry said.

When asked of the ways forward, Kerry replied that the US, Great Britain, UN and EU will work together to make real decisions to end the conflict in South Sudan.

Kerry began pushing his government and partners to come up with new mechanisms after he failed to persuaded President Salva Kiir and Dr. Riek Machar over his Christmas vacation in December 2014 to end the violence and form a transitional government.

“I spent most of my Christmas vacation last year on the telephone to President Kiir and to Riek Machar trying to persuade them to actually institute a ceasefire, which they didn’t do for Christmas.” Kerry continued.

“We have been deeply involved, we don’t talk about publicly every single day but we will continue to push hard and as I said it publicly here in this interview, we are going to raise the level of efforts in the course of next discussion” he added

The United States, which is deeply criticize for its involvement in creation of South Sudan, now calls on its partners to step up similar efforts to end the conflict in South Sudan.

In his recent interview, Kerry announced $5 millions US dollars that will be used to set a hybrid court in the region to initiate accountability process.

In addition, the Secretary of states has calls on the African Union to release its finding on South Sudan conflict, saying that you can’t hide atrocities.

“In principle there should be full disclosure, full accountability, that report should be made public. You know, you can’t hide atrocities” Kerry said.

Unlike in his 2014 visit, in which the United States leaned towards supporting the incumbent government of Salva Kiir, the United States has shifted its focus to stand with the innocent people, and not the leaders who are struggling for power.

Kerry apologizes to South Sudan’s citizens for what their leaders imposed on them, and promised that the international community will focus on the so-called leaders who steal from them, kill, and violate their rights.

“That could mean sanctions against individuals, not against the country, but against individuals who have hidden money away, hidden property away, who have literately stolen from the nation even if they are letting the nation kill itself. This is unacceptable and so we gona put additional efforts into that, I can assure you.” Kerry said.

While the SPLM/SPLA [IO] supports most of Kerry’s proposals, Salva Kiir government decries all sanctions, disclosure of African Union reports, and even the participation of TROIKA countries (US, GB and Norway) all together in IGAD-Plus peace talks that are expected to resume in the next few days.

In response, the government spokesman, Michael Makuei Lueth, objects the idea of accountability, arguing that his government is searching for peace and therefore accountability should wait.

“This is an unfortunate statement, especially at the time when we are in search for peace.  The most appropriate situation would have been to work for peace first, bring peace and, after peace, then you make people accountable.  Now it seems that the Secretary is putting the cart before the horse,” he said.

Makuei said that they have not failed to reach an agreement because his government still a partner in the peace talks that have dragged on for the last 16 months.

“It is unfortunate that people are fast in reaching that conclusion and saying that the parties have failed to reach an agreement.  If we had failed, we would have not been continuing talking.  So, we have not failed to reach peace, but we are in the process,” Makuei said.

33 comments for “America Gives No Respect To “So Called Leaders” of South Sudan, but $5 Millions For Accountability!”