By Gatwech Ruach and Char Bol. 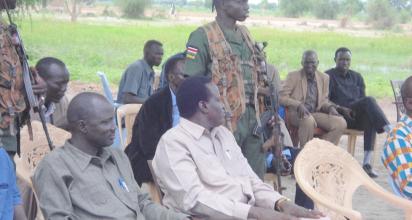 May 6, 2015(Nyamilepedia) — As history dictates Dr. Joseph Nguen Manytuil is the first born son of one of the greatest traditional chiefs, Manytuil Wichjang, of Bul-Nuer society of the current Unity State. Chief Manytuil was well respected among his peers due to great wisdom that he shown during his time. Besides his irreversible judgements, Chief Manytuil was known as one of the bravest chiefs in the entire Lich state, something that was later translated into his Bul community. But not to waste your reading skills on the past generation, the focus of this article is the first born of this great chief, who has now betrayed Chief Manytuil, Bul-Nuer and the entire Naath Community.

Like many traditional chiefs, Manytuil married many wives and raised a large family that he later left behind in the hands of Nguen and his other brothers such as Bapiny. But Nguen dodged this responsibility and left his family suffering in Mayom while he stayed in Khartoum. Nguen failed terribly to unite his family and decided to stay in exile for many years. Part of his exile could be apportioned to his constant failures to get leadership from the state. His last attempts to secure governorship were denied by the people of Unity State in favor of Gen. Taban Deng Gai. Nguen lost elections in 1998 against Taban and also lost hopes to stand against Gen. Taban in 2010 after he returned from Khartoum.

After Gen. Taban denied him all chances to climb the ladder to governorship, Nguen developed hatred against Taban but continued to craves for power. His despairs were awarded by dictator Salva Kiir in 2013 when he employed him as a defacto governor of Unity state. Nguen had always wanted to be a governor but failed to care of or judge the ill-tribal Dinka Council of Elders’ plan to fit Nuer against one another to keep their illiterate son in power as Nuer butcher Nuer for little power. This is how Nguen and his brother Gen. Bapiny Manytuil that were known to have defected and fought Taban earlier in 2011 were easily turned into terrorists killing machines by Salva Kiir to kill their own people.

Today Gaatmanytuil are fighting Nuer seriously telling their Bul people that the son of Jagey or Jikany Nuer of Taban Deng Gai have marginalized our people for many years and that Taban will never come back to Unity State. Nguen is exploiting the innocent population for a useless war, dividing the Nuer people and turning them against one another. That is what intense hatred for one person can do to the nation. While Salva Kiir is fighting his worse enemy, Riek Machar Teny, Nguen Manytuil and his brother are fighting their worse enemy in Unity state.

Dr. Nguen as he was trained in his field is committing the worst crime. Instead of treating people he is killing people, which is the principle of dictator Salva Kiir who turns medical and veterinary professionals into killing machines and liars to preach war than peace and healing.

The first rule of any medical or professional ethical fields after graduation has always been: “ do no harm to others”. Whereas most doctors respect and obey these critical  medical  rules, because their jobs is  to help, and not to hurt their patients. But there are a few like Manytuil, Riek Gai Kok and Marial Benjamin, who can be blindfolded by “food”  and bloody opportunities to forget these important ethical practices.

When they see what would have been their patients in the hospital or even on the streets in Juba and else where, they see “great opportunities” to make money out of their dripping blood. The blood of Ram mi raan has to be shed to reduce their number, and take the army out of their control to cowards so that a son of ram mi raan will never rule this great nation. All these opportunistic doctors had great chances to rule the country but now that they have chosen to be slaves, their chances to lead the country are reduced to zero

Dr. Nguen has so much blood in his hands from many unsuccessful medical surgeries that he attempted on South Sudanese people.  Nguen has  killed  many patients due to his incompetency in medical field after he was awarded his degree from Egypt University. Most of these practices were carried on poor Southerners in Bentiu and Khartoum. The Sudanese government paid little attention to the rampant deaths in his surgical room until in early 2000s when his license was provoked by Sudan government. Following the disaster Nguen was left with nothing, and therefore he had to fully commit to politics and abandon medical practices.

Nguen’s erroneous education was funded by late Gen. Paulino Matip Nhial. Even after murdering patients, Nguen maintained close links with Gen. Matip Nhial but when Dr. Nguen secured a little window to grab governorship of Unity State in late 1990s through Khartoum’s regime, Nguen plotted many times to kill Gen. Paulino Matip. This was the first betrayal against those who support him. The same ambition to lead and to enrich himself is what drives him and his own blood brother in 2013 to accept to be used to kill their own people in Unity states.

There was a conspiracy among the Dinka Council of Elder and Dinka extremists to introduce a genocide against the Nuer community and other people of Greater Upper Nile, and leave them killing one another to give the illiterate president enough room to builds foundations of leadership for the Dinka society. This vision needed opportunists like Nguen Manytuil, Riek Gai Kok, and Marial Benjamin. Many people were not aware of this plan until  December 15, 2013 when the Dinka militia under the order of their primitive president Kiir started house to house massacres of Nuer people. Likes any Nuer leader, who came to power through a small windows, Nguen Manytuil could not stand against the killing of his people. He supported it and even started his own front to fight.

Like any other event, these killing of innocent Nuer has given many innocent Nuer and patriotic South Sudanese a chance to distinguish real Nuer from Nuer-Wew that worships money and not “Kuoth ram mi raan” (God of the people).  This divide and rule has given the extremists Dinka an opportunity to master a new term – Nuer wew  or loyalists because they can kill their community for money. These Nuer-wews to these extremists Dinka Council of Elders are not “Nyigaat” any more. They are “loyal patriotic nationalists” since they can kill their own people in defense of their useless Dinka president.

One of the biggest mistakes the Manytuil brothers (Nguen and Bapiny) has done is to kill their own community before going to other Nuer clans and villages. It was recently where Nguen Manytuil removed the capital state of Bentiu to Mankien as his  government capital base where he may get full protection under the brainwashed militia gen, known as Pul Jang; another slave who know nothing other than old clans’ conflicts and old stories. He ( Pul jang) didn’t even know the differences between the president and the state governor. He was brainwashed by the manytuil sons that they’re the one who are running south Sudan and therefore; whoever fights the rotten Kiir regime is against clan leadership.

To  light of the established facts, the crimes that have been committed since April in the villages of Unity state through the orders of Nguen Manytuil against the civilian are indeed crimes against humanity and if the ICC forgets these terrorists, our people will surely exterminate them in our traditional courts that were once led by their father.  The eyes witness state that “ it is early in the morning, soldiers from kiir regime  surrounded the villages. The raids was started from the North West of Mayom county in the town of Wicok; the militia entered the village, shooting the civilians and took 300 cows and left many dead.”

It is the same days they went to many different villages in Rukkona county and burned down many villages. The eyes witness stated that they came to their village in Gizera island where they shoot the civilians, mostly women and children, were divided, killed children and elderly people and took the young girls and cows with them. And then they set on fire the houses and huts. Those who tried running away were killed.

In conclusion; Dr. Nguen Manytuil and his militia committed unforgivable crimes against humanity, killing and rapping their own mothers and sisters in Unity state villages defending a heartless dictator that has sold our independent to Uganda.The crimes that were committed against women,and  children must be punished. As said in the holly books, those who killed by swords must also be killed by swords. The failures of Dr. Nguen are indeed criminal in nature and must never go unpunished. His name must appear in the United Nations hybrid court that will be establish in East Africa for the crimes he is now continuously committing in the villages.

17 comments for “Who is Dr. Nguen Manytuil?”