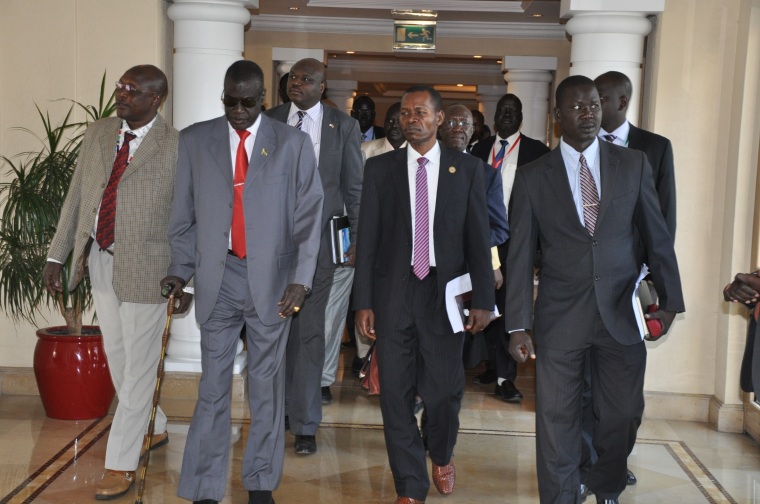 The three governors of Equatoria matching to present a position paper of Greater Equatoria in Addis Ababa(Photo: file)

May 07, 2015(Nyamilepedia) — In a confidential document, extended to Nyamilepedia Press, the governors of Equatoria states appeal to SPLM/SPLA under the leadership of the country’s former Vice President, Dr. Riek Machar Teny, to advance the liberation struggle to end the suffering of the South Sudanese people.

“We are writing to you in the name of the people of greater Equatoria and on the authority of Greater Equatoria States Governors’ Forum. We extend our warm greetings and well wishes.” the governors appeal begins.

“Mr. Chairman, we held consultative meetings with representatives of political, religious, social, cultural, and women associations and groups on matters important for the future of the region and South Sudan. Our last consultative meeting was with Equatorians in the SPLM IN Opposition last month.” the governors explain,

“It is our pleasure to bring to your attention that the political, social and traditional forces in the region offer their sympathy with the suffering people of Greater Upper Nile region and the Nuer and the Shilluk in particular. In the same vein, the people of Greater Equatoria appreciate and wholeheartedly welcome the effort you and the leadership of resistant movement has put to push for reforms and transformation including demands for federalism.” the report continues.

“Our future, no less than yours is being determined by actions of dinka council of elders. Our people suffer perhaps worse than yours under the tyranny of Kiir’s regime. Kiir has arrested and massacred many innocent civilians in Juba under the watch of international community he cannot keep the country hostage because he wants to evade justice. We call on you to act with us, do what you are supposed to do as we do our part.” reads part of the appeal.

Based on prevailing realities in the country, the people of Equatoria have concluded that the country can no longer endure the current pain and suffering for three more years under the leadership of Salva Kiir Mayardit.

“We consulted equally on the recent extension of presidential and parliamentary term of office by three more years. Considering the procedure followed and the prevailing political and economic situation in the country we feel that the central government was not cognizant of its environment. We believe that today the most urgent priority is the search for durable peace not power. The economy has already collapsed, people are dying in the hospital, schools are closing down, investors have left the country and our government struggle to deliver social services to our population this situation cannot be allowed to continue for three more years.” the report reads.

The governors have reiterated that they have not been consulted on the extension of Salva Kiir’s term and said that the decision was pushed by the Dinka Council of Elders.

“We were not consulted in the decision to extend the term of government. Such decision was reached by the so called dinka council of elders who dominate the government and National Legislative Assembly and brought to the parliament for ratification. We are convinced that this decision was ostensibly designed to free the hands of the dinka dominated government so that it can intensify its policies of tribal discrimination and oppression against all of us.” the governors said.

For the above, and many other grievances illustrated in the document, the people of Greater Equatoria have declared total opposition to Salva Kiir government, and call for national-wide campaign to dissolve Salva Kiir regime by July 9th, 2015, and push the two warring parties to reach a comprehensive peace agreement.

“The people of Equatoria in their consultations declared total opposition to any form of government that illegally imposes itself and relies on the use of force alone to maintain a system of tribal supremacy and that Salva Kiir should dissolve his government by July 9th, 2015 and together with the SPLM In Opposition negotiate Transitional Government of National Unity (TGNU) and reforms for specified period before general elections.”the confidential report entails.

“If such measure is not taken you work from outside while we work from within to advance the resistant movement to a new height. We recommend that from now onward, preparation should be in place to stage a countrywide demonstration for Kiir to dissolve his government should he fail to bring peace to South Sudan.” the long report continues.

The Triple are seeking appointment to meet with the TROIKA to raise the grievances of their people; that the region should not recognize or continue to exchange with “illegitimate government” of Salva Kiir.

“We are also seeking appointments to meet with the Troika over this critical issue. We will urge them not to recognize or have any dealings with such illegitimate government and to apply sanctions against it should it default peace agreement with the opposition.” the governors appeal.

The governors believe that their position is widely well supported in the region, and therefore the people are calling for immediate actions against Salva Kiir’s government.

“This move is being acclaimed and greeted with high enthusiasm by the people of Equatoria and other regions including people in UNMISS camps and there is a stirring call for actions in any form against the government.” the governors report states.

Coincidentally, following the meeting between the governors of Greater Equatoria with their SPLM/SPLA [IO] counterparts in Nairobi last month, the son of Central Equatoria Governor, who worked in national security, defected to the opposition the following day.

— Original documents available in our intelleak.

“Dinka Leaders and Their Community Have Failed Our Country” – WES Governor!

Breaking News: Son of a Governor and Member of National Security Joins Rebellion!

← Is Dr. Lam Akol Ajawin a Victim of Own Self or a Self-Seeker Trapped in the Middle?
Together We Grieve! →