Is this the south Sudan we dreamed of? 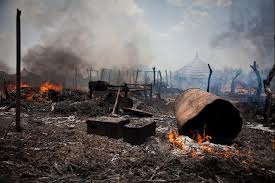 May 07, 2015(Nyamilepedia) — In the period leading to the country’s independence the people of South Sudan were hoping that the post independence days will be marked by Jubilation, happiness and prosperity as the country embark on holistic approach to transform the lives of individual citizens of south Sudan. Such holistic approach shall include inter alia rapid economic growth, infrastructural development as well as human development in an unprecedented scale.

By putting the right policies in place, it is also hoped that the country’s children of school age will flock to schools in their hundreds of thousand if not in their millions, endemic curable diseases that are associated with backwardness would be eradicated, families economic status will be lifted bringing them closer to the citizens of the developed countries, young South Sudanese talents would be harnessed by exposing them to modern information technologies that would enable creativity and innovations in a world of competing interests, the old would enjoy decent life lamenting the period lost in their youth if they could ever rejuvenate and start life at their young age.

It is further hoped the country leadership would be busy setting goals and priorities that would accelerate and fast track the development of South Sudan to becoming a modern state utilizing all the available resources in order to translate vision into realistic dreams.

The citizens of this country didn’t expected these treatments from their leadership who during the liberation struggle against the Arab north oppression promised heaven and earth to the people of South Sudan after the country is liberated. Therefore, when one contemplate on the situation currently faced by the people of South Sudan the following questions which I shall enumerate here under come to mind:

Why did the government turn against its own citizens and made them the subjects of humiliation, abuse and massacre?

Does the government have other citizens to rule or the same government victims are what make South Sudan a sovereign state?

Is a government ruled by one tribe at the expense of the rest of the tribes in the state truly representative of the whole nation?

Will there be peace if other tribes are marginalized in South Sudan similar to the situation experienced in the north under the united Sudan?

Does the government have the moral right to kill its own citizens that constitute the country’s population and get away with it?

Does the state responsibility of monopoly of the means of destruction and the legitimate use of force justifies the rampant killing of its citizens, looting and destruction of individual properties and forceful displacement of people from their homes?

If such attitudes are displayed by the “national government”, does its existence as representative of the country citizenry be a justifiable one?

All these questions and many more not mentioned here are for every single South Sudanese citizen to answer inasmuch as they all affects our lives and no one is spared from their probable side effects, whatsoever.

It is a well known fact that nation-state establishment is contingent on the availability of people who occupy that geographical territory called state, it would therefore be superficial to accept that what the government of South Sudan is undertaking in term of abuses to its own citizens are mandatory.

Obviously, the government has exceeded its mandate and that what is taking place is by any degree unlawful both under domestic laws of South Sudan and the international laws. The treatment meted to our people by the current government is totally unacceptable and deserve to be condemn in the strongest term possible and deterrence measures be taken against the perpetrators.

The situation that had taken place in South Sudan will ever keep vibrating and recurring in the minds of millions that no matter whatever the outcome of the upcoming peace negotiation or the post reconciliation South Sudan would be, it will never ever be forgotten by those affected by this conflict.

You can reached the author at puiyak@outlook.com.