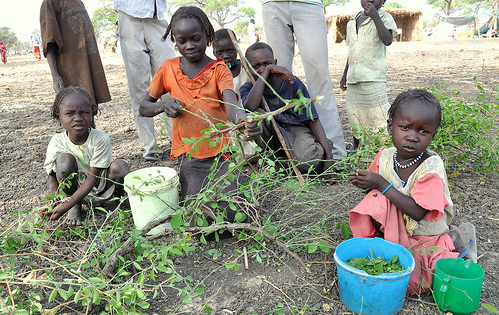 May 07, 2015(Nyamilepedia) — The economy of South Sudan has now technically collapsed and no fake measures can rescue it.

I was surprised to hear from Radio Mirraya this morning 7th May, 2015 that there was economic conference to discuss the ailing economic situation in South Sudan taking place in Juba.

It says the conference is seeking to introduce multiple currencies that is to say the use of Uganda, Kenya and other foreign currencies in South Sudan to reduce the demand for dollars.

I think this is now the total collapse of the economy. How can the introduction of Kenyan and Ugandan shillings rescue the already collapsed economy?

The introduction of these foreign currencies will only benefit those countries and those in power.

Despite the introduction of these foreign currencies that we are waiting to see it will never revive the economy. The pound will still continue to weaken.

How many south Sudanese pounds will one have to exchange to raise 1,000000 Ugandan shillings or Kenyan shillings, and where will one get this big amount of pounds to exchange.

Zimbabwe did introduce use of foreign currency from its neighbors when it experienced shortage of US dollars but did not work at all and Zimbabwe is still suffering like South Sudan.

South Sudan and Zimbabwe are in the same soup and I don’t see any reason to invite President Mugabe to South Sudan to give advice. Mugabe and Kiir are all dictators who don’t want a change and would want their citizens to continue suffering so that they continue to benefit. They only cling to power killing their beloved citizens and subduing democracy and freedom of expression.

The only way out for South Sudan economy to come to life is for Kiir to resign and give way to a credible leader like Dr. Rieak Machar. Second solution is to stop the war and the economy can be revived.

The economy is now biting, people are suffering , prices have doubled it is only the generals, ministers, president, directors and those in position of looting government money who can survive the current economic situation. Everyone in the rural village is crying out for help.

Lastly the tears and the blood of these poor South Sudanese people will soon bring the barbaric Kiir regime down and they will be cursed forever and ever together with their families.

May God bless our beloved country which is being torn apart by Kiir and his clique.

Lojur Molu is a concern South Sudanese who can be reached at cry.southsudan@gmail.com

← John Kerry Got it Wrong Again:
Is Dr. Lam Akol Ajawin a Victim of Own Self or a Self-Seeker Trapped in the Middle? →

Opinion: When handshakes Passes The Elbow, It Becomes Another Thing!

Opinion: What is the role of a County Commissioner?