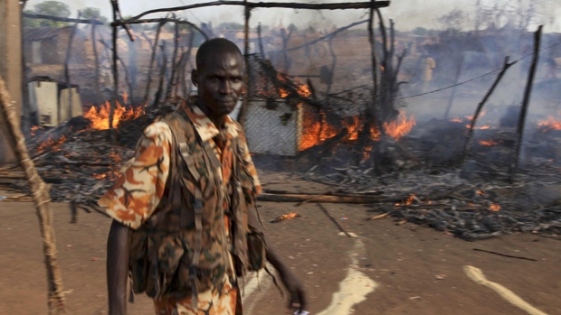 May 10, 2015(Nyamilepedia)—Any story regarding the ongoing blood-bath and destruction in our nation starts and ends not without painfully reawakening that fate-full December fifteenth (Dec-15), and the following black-days which saw the infamous slaughtering of ten of thousand innocent South Sudanese Citizens of Nuer Ethnicity by a government they thought was their own.

Since the onset of this bloody conflict, the Government’s Operational rules and norms have been outrageously unique and constant; they have but since symbolized its Leader and his Cohorts’ governing philosophy, and their crude actions ever since explicitly or implicitly demonstrates it all, its reflect their inert Objective and their number one priority (S) which are but all driven towards achievement of one illicit and inhumane end, implementation of an impossible desire, wipe-it-all-out-Agenda, ethnic Cleansing through shameless mass exterminations, scotched Earth Policy and any other mean that would earn the greatly required results .

Therefore it never come as a surprise at all whenever the assorted Government Forces, their allied Militias and Mercenaries commit the kind of atrocities they do wherever they are because they are but only implementing orders from the mighty Palace in Juba to do as they are doing, as a results and as instructed by the Presidency and the cursed Dinka Council of Elders, wherever its merciless forces and Militias set –foot, the results has been horrifying destructions with devastating effects. Besides, targeted killing of innocent civilians, raping, abductions and sexual humiliations against innocent women and girls, raiding, looting, burning and destructions of innocent Civilians’ properties become the order of the day in that particular place.

Thus the recent shocking waves of massacres of innocent Population of Rubkona County’s Nhialdiu, Whaak, Jizera, Ngoap other Surroundings areas and some part of Guit and Koch County is just a continuation of government’s ongoing Nuer-Extermination Project, a devilish Agenda whose results would see this Nation Ruined unless a quick-fix is found to trip its planners and supervisors of their illegal powers. Indeed what took place in the above named areas was beyond human imagination, the gravity of the situation is written right across the few-lucky survivors’ faces, and to those who had the opportunity to hear it spell-out from their shaken voices, one is convinced that Holocaust is repeating itself but only this time in South Sudan and the World must take a quick-serious note already!

According to the survivors’ accounts Men including male children as young as ten of age were brutally killed, girls and women were gang-raped and abducted afterward, elderly were brutalized, humiliated and left to die, all means of livelihood, cattle, goats, sheep even chickens were looted and driven away, all kinds of household properties were robbed and houses torched, in totally, only one word summarize the situation better, genocide, scotched earth-Policy and ethnic-cleansing. Where is the World? Why is it blind to such crimes, when will it come to rescue the suffering Citizens of South Sudan?

Juba regime’s continued targeting of innocent Civilian is abominable , what it started in that fateful mid-December, which was abstracted by proximity to United Nation Mission in South Sudan (UNMISS Protection Base) as was pronounced by the President himself in one of his Hard-Talk interview ‘’ they were lucky’ they escaped to UNMISS’’ meaning had there been no UNMISS Base in Juba then all would been brutally exterminated, that lost it want to compensate in the Rural villages where the Mission could not reach, otherwise even in UNMISS-Bases , the People are not safe from Government’s dirty hands, UNMISS Protection Sites had been attacked over and over again worst one being the massacring of Hundreds in Bor-UNMISS Base following the recapture of Bentiu Town by the SPLA/IO in April of 2014, other Bases have suffered serious attacks as well leading to several death and injuries of innocents Civilians yet the United Nation’s Responses had been somewhat Collaborative hence ineffective.

Given its un-ceasing hostilities toward innocent Civilians, government controlled areas including the Capital are reduced to mere territories of death, we are all aware of the many death reports across Juba City possibly executed by the Securities apparatus but they are stupidly and constantly reported as being done by un-known gun-men, the question is when will Juba ever know and bring to book the ever killing un-known gun-men?

Frustrated and disappointed in their own government, Majority of South Sudanese Citizens within and without the Country are expressively or implicitly up against the regime and wishes it death while asleep! to demonstrates their lost of trust Citizens are rather in the rebel areas where they are assured of Safety or put in at UN-manned Sites despites it deplorable condition, they cheers when Government assorted ill-mannered troops and defeated and they jeered and mourned whenever Government Win-over an area, As a results, instead of the convention scenario where Citizens normally run-away from rebel and seek protection from the government (S), the opposite is true, in South Sudan situation, back by all evident, rebel held territories are the safest haven as people run-away from the murdering regime and seek safety in them, as a matter fact these areas are securer, calm and enjoy remarkable stability, people continue to live their normal lives with dignity.

Indeed it is only in such liberated areas where one gets the privilege to witness social-cultural events like wedding ceremonies, initiation-rites –ceremonies, cultural games and sports, children dances and plays which are signs of peace, harmony, freedom and happiness.

Generally instead of focusing on bringing peace and stability, the so called Government in Juba is busy, recruiting more Militias in to its ranks, equipping them heavily to create more havocs, carryout more massacres, commit more rapes and abductions, raiding and displacements, and sooner or later the entire population might be forced to squeezed itself in to the overcrowded, filthy and poor-conditioned Internally Displaced Camps (IDPs’ Camps) which have since become a home to most of Upper Nile Region’s Populations or they will like the rest flee across the borders in to the Neighboring states to save their innocent souls from Government onslaughts .

To end with, with death-statistic mounting, South Sudan conflict, given the low-international attention and good-wills it receives may well reach and surpass records set forth by the infamous past, Man-made disasters like the Rwandan Genocide, Holocaust etcetera. May God save the people.

You can reach the author at g.gongk15@gmail.com