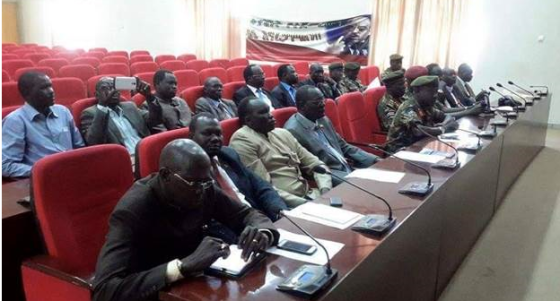 Juba delegation to meeting Gambela delegation in Ethiopia to discuss border issues and its used by SPLM-IO(Photo: File)

The news of the border conference came as a bigger wallop to Nuer People around the world. It came as a great surprise to many Nuer people both in South Sudan and in diaspora. The reaction to it vary from person to person. Some people perceive it as a great pride with extreme jubilation that Ethiopia government has started doing the right thing as far as South Sudan-Ethiopia border implications are concern. Others perceive it with dismay and condemnation that Ethiopia is opening the door for South Sudan government to carry out an attack on rebels’ stronghold counties on the frontier, namely, Pagak, Maiwut and other surrounding areas. Yet, the rest had it that, South Sudan wanted to request Ethiopia government to avoid building Bilpam  so that they can implant their flag on what used to be John Garang house spot and leave it as a historical spot for tourism visits.

Then on Thursday, Sudan tribune news outlet, went as far as publishing a report that “South Sudanese rebels had accused the governor of Gambella region for allowing the conference to be convened in Gambella. It also rumored that, Gambella governor has accepted some bribery from South Sudan government. However, all of these accusations were rejected by SPLM/A-IO spoke person on Friday. James Gatdet Dak, dismissed it as rubbish that the movement had accused Governor of Gambella for any thought. He believe, Ethiopia as a sovereign State, has a right to meet with its counterpart—sisterly countries, and that should not affects some outstanding issues Ethiopia as a country has engaged in.

Anyhow, the whole uproar had ended on Saturday, following the encountering messages coming from Gambella to assure general public that nothing will interfere on current ongoing higgledy-piggledy in South Sudan. The fact that, such conference generate some heat, motivate one to elaborate further and one’s aim of writing this article is to articulate some implication issues regarding South Sudan-Ethiopia border. Bellows are some historical facts pertaining the two neighboring countries border issues.

Initially, Gambella-South Sudan border is one of the most conflict-ridden parts of the countries of Ethiopia and Sudan, base on the old Sudan setting. There have been low-intensity conflicts in the region for a long time on issues related to natural resources use by various groups living in the region of these two countries. In an article written by this author in 2007, entitled “Disarmed rest of South Sudanese and armed Murle and Toposa, when will Murle and Toposa going to be disarmed?” one had argued that, indigenous groups anywhere in the world, develop violent conflicts base on key resources such as land, water, forest, livestock and pastures. These are some of the factors some ethnic groups fight for.

With the politicization of ethnicity since British and King Menelik era, these conflicts had escalated here and there assuming different dimensions. Some of the deadliest and worse complex issues have been inter-tribal violence’s pitting  Anyuak, Murle, Toposa, Dinka, Nuer Surma, as well as many of their neighbors. Year after year, new political developments both in the Sudan and Ethiopia destabilized the emerging symbiotic relations, particularly the new power relations involving the area since the commencement of the civil war in Southern Sudan beginning in the 1950s, 60s and later.

This civil war has had a profound effect on inter-ethnic relations in both South Sudan Upper Nile and Gambella Ethiopia regions. The prevailing insecurity for pastoral mobility and cattle raiding motto induced livelihood diversification to increased interest in cultivation, reversing the usual trend of farmers encroaching pastoralist territories into the other ways around. The virtual collapse of services and facilities such as education and healthcare institutions increase massive influx into areas in and around the towns where those who are uprooted must seek refuge in order to avoid being slaughtered.

On the other hand, those who remain steady in their respected areas must look for sophisticated weapons to overpower those who might harm them. This has resulted into the militarization of the societies at an alarming rate, which among other things includes the breakdown of traditional ethics of warfare as well as using violence as a strategy of resources entitlement. The civil war in southern Sudan and the proliferation of trade in small arms brought differential accumulation of forces, because members of the tribes in the border had somehow involve in the civil war. That is why militarization is more pronounced among Anyuak, Nuer, Murle as well as Surma; due to the fact that, these societies are close to the bases South Sudan movements were established. Therefore, the present of army-bases had the greater effect of changing inter-ethnic discourse from share values to confrontation and violence.

The confrontations or border violence started way back and that gave British government hard times of controlling feudal clashes. Colonial authority tried their level best to impose administration justice system. That approach failed miserably. That when they made their mind to adopt the legal category of “customary law” to cover and deter crimes being committed by indigenous groups. These customary law British had established had continued to apply in the rural areas of Southern Sudan during British tenure and after independence in 1956, without interruptions.

Today customary law continue to exist even after South Sudan independence to serve local negotiations along traditional lines. With geographical changing face of the area, ethnic confrontation has never gone away, it kept evolving decade after decade. On this past Wednesday, voices coming from Gambella by air as well as online media, indicate that, there have been many complaints that had characterized Murle killing of their neighbors including Anyuak, Dinka, Nuer, Surma or anybody in their reach. It has been said that the practices were availed to Ethiopia federal government and these practices had caught the attention of the Ethiopia minister of defense, who opted to arrange a conference that must include David Yau Yau the chief of Greater Pibor Administration whose people are instigating insecurity in South Sudan Ethiopia border.

In that regard, the governor of Gambella was approached by the Ethiopia defense minister whether he could accommodate the conference. After Governor Gatluak agreed to host the conference, that when uproar has begun. Some questions that remain to be asked and beg answers if anyone would volunteer their time are as follow: where is Ethiopia government all these years? There has been more than one occasions where Murle had penetrated into Gambella region and either abduct children of Surma, Anyuak and Nuer on the side of Ethiopia as well as on south Sudan side. Some good examples are, in April of 2005, Murle attacked Akobo and Pochalla where they abducted children and looted livestock. Then, in 2006, they cross border again to Gambella region and ambushed Palbwol on the third week of March and another counter attack in Billimkun with in the same week, about 18 people were killed and few days later on April 12, 2006, 40 people including children and women were massacred at night in Ngor. Leave alone other attacks Murle had carried out on South Sudan against Nuer and Dinka respectively. Why didn’t Kuol Manyang do anything since some of these genocidal acts are inflicted while he was serving as a governor?

All above violations made the conference between South Sudan and Ethiopia governments questionable, given violations that are being perpetrated in the border of the two countries on their watch and they idly sit back doing nothing to tackle the worse that repeatedly occurred. Isn’t Ethiopia and South Sudan in a mood to conduct the conference in order to secretly deliberate on the issue of their rebel oppositions’ who are moving along Ethiopia-South Sudan border?

It is a known fact that South Sudan is in the middle of fatal crisis where some large extended landscape in the borderline, is not under the government of South Sudan control this make it odd for oppositional group in the border to be excluded from the talks. What if south Sudan and the Ethiopia governments decided to close their borders for their own security benefits, wouldn’t that has a profound effect on South Sudan oppositional groups who see Ethiopia at the moment as a neutral entity? And isn’t Ethiopia aiming of repeating the same plot Derge regime did with late Dr. John Garang and Samuel Gai Tut at the quest of then South Sudanese movement in early 1980s?

In anyway, one would argue, the conference could not have been limited to only two government delegations if permanent peace has to be prioritized. The move may require all players in the border, civilians as well as government officials and rebels. That could seal all the odds that wreck normalcy in the two countries’ border. Till next time!

Sarah Thomas lives in Canada and holds a BA in Sociology: she can be reached at sarahthomas729@yahoo.com