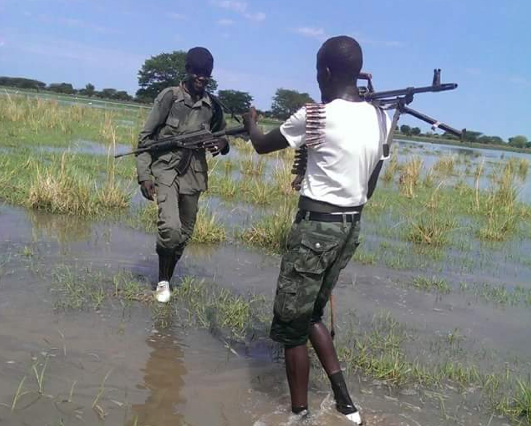 May 15, 2015(Nyamilepedia) — I am hereby expressing my deepest concern regarding the full scale of violence occurring in Bieh state formerly known as Jonglei state, South Sudan. I am here by informing the International community and the world that the Lou Nuer who belong to Bieh State will not sit and wait for the murdering of their families and burn down their villages and home by Salva Kirr and Dinkas Youth of Greater Bor.

We condemned the move. We are fully aware about what they can do if they reach the Lou Nuer lands. The recent killing of civilians in Koch, Rupkoni Nhialdiw and Guit counties in Unity State, the evens in those counties said it all, where a combination of Militias and SPLA were busy for killings civilians and burning down their villages since April 27, 2015.

Many reports by humanitarians’ agencies and local community say that the Sudan People’s Liberation Army (SPLA) and armed Maliatias youth are poised to confront civilians using UN flags to confuse civilians around those counties in Bentiu with the potential outcome of casualties on civilians.

I am warning the International community not to blame us when we respond to this horrors put on our civilians by the SPLA and it Militias who are belonging to Dinkas communities.

The violence appears to be affecting women and children and echoing concerns from the International community and the UN agencies around South Sudan. It seems though that the violence that massacres civilians in Bentiu and now in Bieh State formerly known as Jonglei are intended to wipe out the entire Nuer altogether in South Sudan.

The author can be reached at l.chuol@yahoo.com

22 comments for “Statement On The Crisis In Bieh State, The Lou Nuer, South Sudan”

Opinion: Kiir and Machar Are Overlooking the Severity of Kitgwang Declaration in their Own Risks