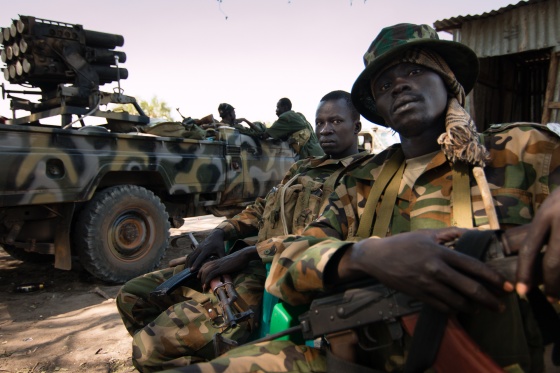 SPLA [Juba] troops after falling into ambush at Pariak in January 2014(Photo: file)

May 21, 2015(Nyamilepedia) — Military sources of the independent Revolutionary Movement for National Salvation (REMNASA), an equatorian front, allege to have attacked a military convoy of SPLA [Juba] in Mvolo County of Western Equatoria yesterday.

According to the recently appointed spokesman of REMNASA, Col. John Sunday, the attack destroyed two vehicles, and left at least one fighter dead, a report that is yet to be independently verified.

The independent military wing of REMNASA warns civilians to refrain from boarding military vehicles in the states.

“We would like to caution civilians to refrain from boarding military vehicles so as not to sabotage their security.” Sunday said.

According to Col. John Sunday, who responses from the Central Africa Republic, the new rebel group does not fight or attack civilians but fight on their behalf to install democracy, eradicate corruption, provide social services and to restore nationalism in the country.

“REMNASA will continue to adapt to all options, to bring about the meaningful regime change; for installation of national democratic government of the people for enhancement of sustainable democracy, national unity, peace and development.” Sunday concludes.

In other reports, while series of deadly battles between the SPLA-Juba and SPLA-IO continue in Upper Nile, Unity and Jonglei states, tribal feuds between the Nuer, and Dinka subsections continue in Greater Akobo, and Warrap states.

In Gograil, the President’s home town, Aguok has been involved in deadly clashes with Apuk last Weekend.

In Akobo East, a conflict between Chie-tot and Chie-Majoak led to targeting of intellectuals in the county.

While over 50 thousands people have been killed, more than 2 millions are displaced to refugees and IDPs camps, and more than half of the population rely on humanitarian assistance.