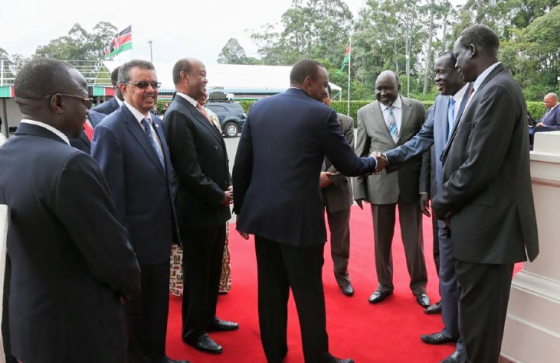 Kenyan president, Uhuru Kenyatta, agrees the former detainees, the G10, after a meeting to hold a parallel peace talks in Kenya(Photo: profiles)

June 1, 2015(Nyamilepedia) — I hope this letter finds you fit as a fiddle, I also wish that you find time to peruse this piece or anybody else working for you. My name is Dak Buoth, I had worked for southern Sudan referendum commission that ushered in south Sudan independent on the night of 9th July 2011.

Mr. President, I want to re-address you in this Open letter concerning the deteriorating security situation in my country, and if this isn’t the right channel to seek your attention on this matter then I stand to be corrected. As I squeeze you with these recurring issues, I am not ignorant of the fact that Kenya has pressing security challenges akin to what affects us in South Sudan. I feel and understand the burden considering the fact that Kenyan’s past successive leaderships have relentlessly stood with us shoulder -to-shoulder in the quest for our independent, and thus after we finally attained the same, Kenyans and the international community expects the obvious from us, that peace, equitable development of the country, rule of law and constitutionalism would be our guiding stars in our next journey toward to ascertaining absolute prosperity.

Unfortunately, barely three years after achieving that half-bake independent, the country of south Sudan have now become unequal, unstable and disintegrated state, the rule of law has been defeated totally giving room for impunity to reign, the constitution has been mutilated wittingly turning the all country into ‘‘slaughterhouse.’’ Our leaders are driving the country in speedily at wrong direction, the direction of ethic chauvinism and corruption of highest order. The once jubilant community of south Sudan has now turned hapless with many dreams shattering and waning.

Mr. President, As you very well know, leadership normally comes with enormous responsibilities, they say it is more than just ambition or power, that a person in leadership position is like donkey drawing a cart behind him in which all sundry will put their luggage and rubbishes for him to carry along, he must not tire of being the beast of burden of the people that seek his leadership, that is why we never hesitate to seek solution from you, we see any Kenyan president as our alternative president that can offer us guidance when our leaders decides to mislead as they do today.

Mr. President, first and foremost, I would like to extend my personal congratulations to you for the numerous trails you made in an attempt to restore peace and tranquility in my country. It is worth noticing Mr. President that you have tried the best one can do to his neighbor; to see into it that our political leaders must honestly reconcile and help them realize the ideals of our liberation struggle.

On 26th December 2013, twelve days after the war erupted on 15th December 2013, you joined other East Africa leaders who visited Juba at the height of political tension to remind the warring political leadership that conflict has never been solution, that it only brings destruction of properties and loss of innocent lives.

Since then you have never been indifference in the efforts to restore peace in South Sudan. You have been staunchest proponent of peace in our country, willing to share in the shame, in the disgrace and in the failure of our leadership. You have exercised extreme neutrality in your engagements with the warring parties unlike others. You have honesty shown that you really want to break the cycle of violent, the cycle of reprisal which gives rise to counter-reprisal in which one underdog is top dog, and underdog wants to become top dog.

Last week on Friday, 29th May, 2015 you flagged-off the return of the so call SPLM former detainees to Juba, congratulations. I heard when your Deputy William Somoei Ruto call their names as State Guest In today 52 Madaraka event. Am sure after this long year that they have spent in your custody, we expect them to learned from their political blunders which triggered this violent. It was very ironical and traitorous of them; that after long struggle for their release from prison, they came and established another third block whose sole objective was nothing but to sabotage and prolong the peace talks in Adisa baba Ethiopia. We are gladdened by their return to juba, and we wish them well, let them go and do that whish favors peace and not their conventional rhetoric. Let them know that they are symbol of all that had gone wrong in south Sudan; they are figures of death and hate at home and abroad.

Mr. President, before you conclude this glowing speech in this Madaraka day event, I urge you to convey my warm greeting to the wanaichi, we are proud of you; you have proven beyond reasonable doubt to be our right-hand neighbor and true friend indeed. In your continuing state of the nation address, i want you to invoke the solomonic words of President Dr. Kwame Nkrumah during Ghana’s 1957 independent celebration; ‘‘that Ghana was not free until other African countries attain sustainable peace and freedom’’ Those words weren’t meant in the context of colonialism alone, Dr. Nkrumah simply means that when a neighboring country is not at peace; you’re not at peace too. I want you to engage your citizens to reflect on those words with regard to south Sudan, Burundi and Somalia armed conflicts.

As African in general, we ought to wake up to the reality that no nation could live in peaceful isolation.

Mr. President, as I mentioned therein, we commended you for facilitating the return of those SPLM detainees to juba to join their erstwhile colleague; it is one fundamental step toward fast racking the restoration of peace in South Sudan. As you see them off at Jomo Kenyatta International airport today, I urge you not to throw in the towel in the search for sustainable peace in south Sudan. I encourage you to exert and exhaust your regional and international influence to marshal other regional and international leaders to compel the main belligerents; that is President Salva Kiir and his arch rival Dr. Riek Machar to unconditionally adhere to the cessation of hostilities agreement signed early last year.

Mr. President, do not be tempted to think that the return of this SPLM faction is problem half-solved, not at all. In fact it is unripe deal, unless the aforesaid belligerents are forced to signed peace. As we converse now, you couldn’t believe the pain shaking my heart and the constant follow of tears down my face. On 21st May, 2015, my rural village where my umbilical cord was buried, Nyal in Panyijar County, South of Unity state was attacked with heavy Artilleries (T-55) and other deadly weapons in broad day light, the attackers ordered indiscriminate killings of Children, elderly and defend less mothers and houses set ablaze, forcing civilians to seek shelters in swampy areas in this rainy season. At the moment, another fierce military confrontation is currently taking place in Awiel regions and in Maridi and Bazia western Equatoria and in most parts of Upper Nile state including continuous attacks in UN protection camps.

According to renowned right body, Amnesty international annual report 2015, hundreds of thousands killed so far, more than 2.5 million internally displaces and 500, 000 fled the country, about 5 million at risk of food insecurity. The two main principals of war in south Sudan have repeatedly violated the fundamental principle of just war tradition; which among other thing include, ruling out direct and intentional attack on non-combatant civilians as fundamental and unconditional moral principle.

As such, we want the Intergovernmental Authority on development Igad body which your country is leading member to change tactics, let them resolve and resort to ‘‘peace enforcing’’ this is the most rescuing and efficient strategy of saving lives. To help reduce the violent conflict or the imminent threat thereof, this is applicable where the parties in conflict have not yet consented to term of peace agreement, and use of force or other forms coercive diplomacy are undertaken by outside parties in order to compel such consensus among the belligerents.

The Writer is south Sudanese residing in Kenya; he can be reach for comment via eligodakb@yahoo.com.

← Government Military General Charged of Hate Speech and Incitement!
Statement Attributable to the Spokesman for the Secretary-General on South Sudan →