Mabior Garang and a Leech in a river

“Know the truth and the truth will set you free” Is Mabior Garang’s worldview differ from Dinka community? 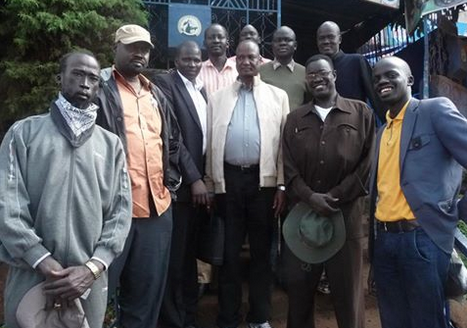 June 11, 2015(Nyamilepedia) — For the lack of a better term to describe Mabior Garang attitudes within the SPLM-IO, we shall compare Mabior Garang De-Mabior and his associates to Leeches in a river. Mabior Garang and his associates are acting like leeches in the river. Leech can bite and suck a lot of blood from its victim without triggering pain. Ever since Mabior Garang De-Mabior joined the SPLM-IO, many people did not realize that the man has his own agenda within the movement. However, what we know so far about Mabior Garang was that Mr. Mabior was evicted by the government of South Sudan 7years ago.  As a result, Mabior end up living in exile until the time his mother Rebecca NyaDeng encouraged him to join the SPLM-IO.

As a matter of fact, Mr. Mabior did not join the SPLM/A-IO, because Salva Kiir has committed genocide against Nuer, but Mabior Garang wanted to build himself so that he could elevate to the top.

Like a leech which attaches itself to the skin, Mabior makes himself very close to Riek Machar so that he could be treated like a prince. Leech first injects a substance that works like a local anesthetic, so that its victim would feel no pain. Then the Leech sucks blood, which is almost three times its body weight. Similarly, Mabior pretended to be vocal about the genocide committed by his Dinka fellows in Juba, on December 2013. Mabior Garang’s fake campaign against Salva Kiir, plus his last name were enough to convince the SPLM-IO leadership to award him with a position bigger than his mind.

Given his background, Mabior should not hold such a high and important position, if education and experience are matter. Mabior used to be a “carouser” or a “clubber” in Nairobi Kenya hotels and nightclubs, before he joined the movement in 2014. After I read Mabior Garang’s article (Titled “Garang Blasts Machar Associates, Hails SPLM Reunification)” I came into conclusion that Nuer community are suffering from “Self –deprecation”.

History has proven that Nuer people always look themselves down, at the point that they don’t trust their leadership quality. First, Peter Gatkuoth Gual gave his position to Abel Alier after he won an election with majority votes. Second, the Nuer leaders in Bilpam especially those of Benson Kuany Latjor, Samuel Gai Tut, William Chuol Deng, Paulino Matiep, commander Gatwech Kuany and others Nuer leaders were the founders of the SPLM/A Movement, but later on they gave it to  Akot Atem and  Garang Mabior. Third, Dr. Riek Machar, who was supposed to be a second man after Dr. Garang, surrendered his position to Salva Kiir who is now becomes the Nuer enemies #1. So, now the question is what is wrong with Nuer people?

The author of this article, James Mathiang, can be reached at jamestot20032003@yahoo.ca.