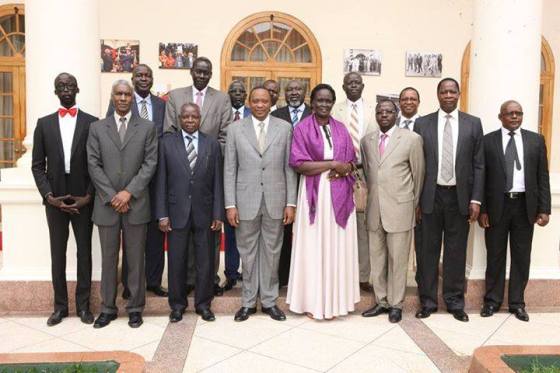 June 29, 2015(Nyamilepedia) — the so called G10 is now almost reducing to G-4; I know some genuine questions will be asked by mindfully readers, why G10 reduced to G4. The defection of Pagan Amum has caused a greater internal turmoil in the group of former political detainees. The rest of the formally G10 has initially reputed Pagan his rationale decision of rushing back to Juba reasonably because of his unbelievable individual interest. Now Pagan’s defection has totally brings in more disputes despite the fact that; the focus deal was not what Pagan took for his own benefit, Pagan went and bowed before Mr. President Kiir begging him to reinstate him as the usual SPLM Secretary General. Kiir Pardon he the Pagan and thereafter he reinstated him to the position of secretary general of the Party but what are the technical procedures that need to be taken against Pagan, this entailed in the Juba reports.

The recent developments on the G10 group are that; they met last week trying to sort out their internal political differences but certainly they end-up with no political assurances and deal as well. Those of Oyei Ajak, Guier Chuang, Dr. Majak De Got and Mama Rebecca Nyadeng De mabior are now not part of the group headed by Pagan under SPLMA party, they needs some mature agreements within the group and of that of the Government but unfortunately nothing work out in the process.

They earlier said, they will only accept to be part of the SPLM but they the G-4 did not agreed on both two major issues with G-6. They wanted to remain the same as they were in the group, they cannot now join government but proposing to be part of SPLM if the party is officially reunify in the near future.

Based on the recent official meetings being conducted in Nairobi by His Excellency Dr. Manaath (Dr. Riak Machar Teny) with former political detainees and other political stakeholders of South Sudan’s crisis, it has been confirmed that; the G4 members disagreed with G6 headed by Pagan saying that they will not go back to juba under Kiir’s government but the G-4 members are waiting for the proposed deal to remained neutral hoping to get the a foresaid G10 percentages mentioned in several proposals in the peace process in Addis Ababa or else to be deemed by the principles to reunifies SPLM factions.

(Not by assumption but real fact said); Dr. Machar confirmed his political position clearly; and promising all the political dancers around him that this is the right time for the people of South Sudan to return home and to enjoy a stable and permanent peace in the country, he said in Nairobi last week. The camp of G-10 is at no political direction since they failed to have common understanding because of Pagan Amum his political betraying in the camp of G-10.

The only pending condition now posted in the camp of G-10 , they should officially declare their position as the peace is at the door but they are left with no promises in the recent negotiations in Addis, Nairobi talks and in the past deals conducted in South Africa by Dr. Machar promising the whole world of peace to come back in South Sudan.

The leaders of the world’s youngest nation are given the task to end the continuing wars in the country by the regional and international community before the end of this year 2015, although Mr. President Salva Kiir blames IGAD and Kenya’s Kenyatta for no reasons trying to posted unbelievable immature accuses to the leadership of Kenya wanting them to explains why he was called to go to Nairobi by Mr. president Uhuru yet he officially delegated South Sudan’s Foreign Minister Marial. The talk was not only hot but a fire with no water-cooler in the hall where Kenyatta and touch talkers were in attendance of that talk.

The reduction of G-10 will simply give opportunity to the majority leading parties, the SPLA-IO and SPLM Juba. The so called G10 should either decide to wait for SPLM reunification or to follow Pagan his political maneuvers. The G-4 members are also dancing on no ground because they are left with no choice, Oyei Ajak, Guier, Dr. Majak and Mama Rebecca will now seeks for another best solution on whether to join SPLM-IO, SPLM Juba or to remains neutral forever.

According to many activists, G-10 members headed by Pagan black-mails themselves trying to predict Kiir his death because of his heath condition. Pagan by assumption assumes that if Mr. President Kiir died then he will definitely remain powerful in the party because of the SPLM hierarchy which considers him as the third man in the SPLM protocol.

Now the question is that; even if Kiir dies can Pagan neither Wani Igga be the president of South Sudan despites the fact that the very powerful man is at the concord of presidencies (Dr. Machar). The power greediest man called Pagan Amum forgot that there are other strong guys like; Nihal Deng, Kuol Manyang Juuk and King Pual Malong Awan Anei are still the rights hand men of his Excellency president Kiir. I know the political culture of South Sudanese, on which earth can Pagan be the head of state since he politically failed to have root in his own community in Upper Nile State particularly in Shilluk kingdom.

The defected G-6 seeks for a shorter political opportunity thinking that they can be trust by the people of south Sudan simply because they nick named themselves G-10. Pagan and his colleagues must always recall back how we achieved our CPA, when Dr. John Garang died automatically the second man to replace him was the Dr. Machar but he traditionally considered Kiir to took it over as the president of the republic of South Sudan and the first vice president of the republic of Sudan in general. Pagan and his colleagues should therefore; prepares themselves to face another court of law because they wished Kiir to die considered the medical situation as the death of Kiir. Kiir’s defend lawyers must fill their case against the returning G-6 headed by Pagan on whether they are more powerful then Ngundeng Bong the most powerful prophet in South Sudan leave alone Jesus Christ and the heavy God which creates people in his own image. Betrayers can never be successors, they politically refused to participate in national crisis pretending to be neutral as they thought but the people of south Sudan have known them well.

The author can be reached on delonymajak@gmail.com (Monday edition).

← South Sudan Independence Day Is For All of Us (South Sudanese)
Three More Years For Nyandeng Malek: Is it Office, Constitution or Term Extension? →