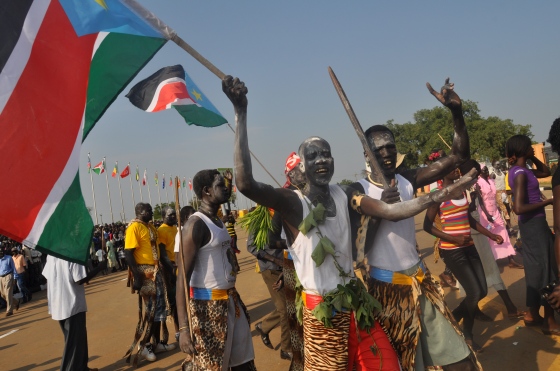 July 02, 2015(Nyamilepedia) — An article from Abraham Deng Deng on June 30th 2015 has spelt very clear and loud Dinka characters and the Agenda that Salva Kiir is pursuing. For those who did not come across this article I would like to quote it in his broken English without altering or correcting anything he wrote.

“ Dinkas trust themselves because during liberation war all 63 tribe 97 percent were killing Dinka all over the South Sudan in support of Arab to prevent the South to be country,specially Nuer targeting SPLA to failed Dinka,and forgetting liberation agenda. So now Dinka liberated alone without 63 tribe and Kiir give you all the positions as citizen and you want repeated collaborator agenda.

This time you killed one Dinka revenge will be equivalent to five men from that tribe you Equatorians be care. Keep away from Nuer rebellion, your kokora time will come back to Dinka mind,,,,,,Nuer called themselves Dinka husband, let wait and see, Dinka respected them during liberation war not to please the Arabs,now Dinka will revenge seriously all atrocities committed to them in the bush if touch”After 100 years if,,,,, if whoever took his government by force Dinka will go to the bush, and liberated it from the tribe. Dinka cannot listen to to Dr. Riek, because he was the one who killed allot of Dinka in liberation time.This useless Dinka who joint rebel seeking for green pasture are nonsense to their relatives. Dinka is ready to confront any rebellion ,man is born to die in defense of his community, Chollo Olony, you capture Malakal today we capture it tomorrow no,all boys no school for this generation we release them to fight and be killed by those who want to ethnics cleanse Dinka only.after Dinka liberated them,shame on you” Abraham Deng Deng concluded his hateful statement.

First, I want Abraham Deng Deng and his Dinka tribesmen to understand that the Dinka alone could not win a war against Khartoum regime. In fact South Sudanese communities knew Dinka secret agenda of domination championed by the late John Garang just at the time he decided to kill all members of Anyanya 2 simply because Anyanya 2 was pursuing a national agenda. But when Garang realized that the Dinkas will ruin if they alone pretend to fight the war with the Arabs he then wrote a manifesto which sought the support of all South Sudan communities. In brief, none Dinkas joined the movement because of patriotism considering what Mohammad Ali Pasha did to the blacks and took them as slaves to Egypt from 1821 to 1885 (300 slaves every year X 64 years =19200 slaves Muhammad Ali Pasha took them from all the African tribes in the Sudan), the mass killing committed among the tribes that inhabited the bank of river Nile during the Turkiya, between 1829 to 1831, the policy of Islamization and Arabisacization and Khartoum intention to make South Sudan an Arab country. It was because of these that South Sudanese united to fight the common enemy but if the Dinkas consider this as weakness, such a history will never repeat itself. Secondly, when the movement reached Equatoria the sons and daughters of Equatoria threw their unequivocal support behind the SPLM/SPLA movement. Unlike other regions like Rumbek and Bor, just to mention a few, the Arabs never recaptured most towns in Equatoria from the SPLA. People from Western Bahar el Ghazal,Bor, Rumbek etc. sought refuge to Equatoria and the natives of Equatoria proved very hospitable to all who resided in the territory and those of us who witnessed this generosity are still alive and even some people decided to remain there until today. For example the natives of Western Equatoria and other areas contributed food that kept the movement strong throughout the liberation war. The question of 97 percent of the 63 ethnic communities in South Sudan killed the Dinkas, this statement is like opening an old wound. Regardless the generosity the movement received from the people they used every tricks to exterminate outspoken politicians and intellectuals they found within other communities, such as Joseph Oduho and his son Kezito Oduho and one civilized Dinka Benjamin Bor who was poisoned by John Garang in Addis Ababa during the Mangisto regime, that has left deep wounds in the heart of the people of South Sudan and Equatoria in particular. The other issue of kokora that Abraham mentioned in his article, does Abraham think that they the Dinkas are stronger than the Equatorians and the rest of South Sudanese communities?

and without little doubt about why the government delays the peace talks. The difference is that Dinkas

have been preparing to wage war against none Dinkas whereas the none Dinkas have been preparing for the building of a democratic nation. The statement of Mr. Abraham Deng Deng has raised an alarm among none Dinka and Equatorians in particular. Yes, the Dinkas have acquired war materials, at the moment they can revenge as he mentioned it. But revenge is on someone who committed a crime against you. Why should a master revenge on his servant, since Dinkas are the ruling class in South Sudan. But he should understand that there is no South Sudanese who does not know how to hold a gun and let him not shout victory before he wins the war. Even our former masters did not do what Dinkas are doing to South Sudanese people. It is a pity. God will answer our prayers.

You can reach the author at khalidngbokoro@gmail.com

2 comments for “DINKAS ARE NEVER GRATEFUL AT ALL, WHATSOEVER THE CASE!”