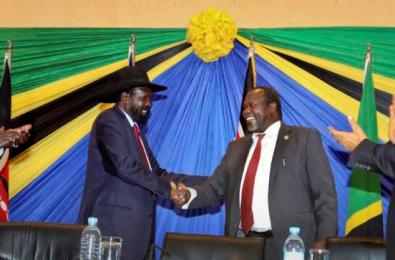 July 24, 2015 (Nyamilepedia) — In 1950, a powerful U.S Army General, MacArthur had a disagreement with the President Truman on how Korean War was being conducted. The General became vocal about the disagreement. The General wanted full-scale war on China and use nuclear weapons on China if necessary. On the other hand, President Truman didn’t want the war to escalate into World War III. Therefore, he wanted the war to be confined to Korea only. As a result of such disagreement, Truman fired General MacArthur despite MacArthur previous heroic actions in WWII and his high support from the American public.

Three days ago, Dr. Riek Machar and his powerful Generals had the same situation. The Generals wanted a full-scale war on Salva Kiir government. They said Kiir committed genocide in Juba on December 15, 2013 so he lost legitimacy to be the president of South Sudan. Any Peace agreement that keeps him as a president is unacceptable. They asked Dr Riek Machar to provide them with weapons and give them order to conduct full-scale war on Kiir juba government if peace agreement will not make Kiir step down. Dr. Riek believes, as much as Juba government committed genocide against South Sudan citizens, it’s not worth destroying the whole country over that matter. He realized that if he gives his Generals weapons and orders to commit to full-scale war, they will stop at nothing short of capturing Juba and Kiir himself.

One General Peter Gatdet Yak was quoted “All I need are weapons and ammunition; I know for sure I can reach Juba. If I die, I know I will not die outside of Juba rather I would die inside after I capture it.” As Dr. Riek weigh his options, he realized that his General are capable of capturing Juba if given enough weapons and ammunition but he also Equate into the solution whether if South Sudan itself will survive after capturing Juba. How long will it take? How many lives, (soldiers and civilians) and infrastructures will be destroyed in the process?

As an example, two days after the Juba massacres, The White Army along with other forces reached approximately 45 KM from reaching Juba. For some reason, they halted the movement for couples of hours outside of Juba until Uganda gunship were able to dismantle them by using cluster bombs. Some people believe they were halted on purpose to not allow them to reach Juba for the same reason. One can’t help but wonder, “If they made it to Juba, were they going to maintain control of it. Or they were going to destroy it, were they going to revenge, or to rescue their loved ones, in another word, would South Sudan survived their penetration to Juba?” Nobody can clearly answer that question since they didn’t make it to Juba.

Such decisions might have been above Dr. Riek to make, but someone made the decision for the White Army to not reached Juba. Could the same people pressure Dr. Riek to not wage a full-scale war against Kiir for the sake of making sure South Sudan survive after this conflict? In conclusion, the decision made by Dr. Riek Machar was tough but a necessary one.

Further, it’s not the first time a powerful and influential General is relieved by a civilian’s leadership. But this is new era of maturity for South Sudan. A new society where civilian’s leadership is superior to military leadership; a democratic era where Generals do not intimidate civilian’s leadership, Instead, they obey orders given to them by civilian leadership. If this case is handled wisely, it will serve as an example for the rest of African leaders to follow. To compare the two scenarios, the decision by Truman is still controversial until this very day but due to America maturity and system set in place for such scenarios, it was handled properly. If a society like South Sudan can do the same thing even with its lack of maturity and lack of systems set in place to deal with it, it would prove to the world that the new nation can surely manage

Bol Kong Ring is a concerned South Sudanese residing in the United State; he can be reach at: bol.ring@yahoo.com

Nyamilepdeia reserves the right to moderate, publish or delete a post without warning or consultation with the author(s). To publish your article, contact our editorial team at info@nyamile.com. or visit our contact page for further concerns.

← Dr. Machar Writes To AU Peace and Security Council!
PROPOSED COMPROMISE AGREEMENT ON THE RESOLUTION OF THE CONFLICT IN THE REPUBLIC OF SOUTH SUDAN, ADDIS ABABA, ETHIOPIA MM 2015 →

1 comment for “South Sudan; Successful leaders are described by their wise decision”