Subject: Letter of Approval and Confirmation of Mr. Chol Jacob as The Elected Coordinator of West Nile Dear 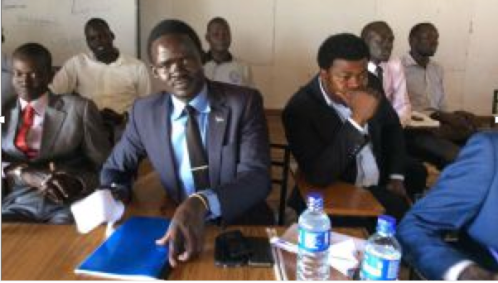 President of South Sudanese Students Union In Uganda ,Peter Nin Tut in the middle and Mr. Anthony on the right (Photo: Extracted/Nyamilepedia)

March 15, 2016(Nyamilepedia) —- In first place, we are very glad to write to your highly esteem office for the first time as SSSU officials operating under your command as the president of this great union of South Sudanese in Uganda. We are here to assure you that as South Sudanese in West Nile, we are united and speak with one voice as one people who belong to one nation under South Sudan.

Mr. President, we write this letter as SSSU’s Executives and Chairpersons from various universities and colleges in West Nile in regard to your contradiction statement in reference to Coordinator of West Nile. We really regret your statement Mr. President in which you said you have issued a degree appointing West Nile coordinator without the consultation from the students living in West Nile. We, the elected executives and chairpersons of various universities and colleges have condemned your move for dishonesty and we, as one body, urge you to withdraw your statement for the common good of this body, or your state, if not withdrawn as we demand, warrants divisions in the union.

We regard the appointment of Mr. Gabriel Mawich as Coordinator of West Nile not only illegal but also politically motivated; such actions like yours infringe rights and are virtually against the will and the rights of South Sudanese in West Nile. Democracy carries the day here in a simple sense that students voted Chol Jacob as their Coordinator in a free and fair election. Where does the appointment of Gabriel Mawich apply here? As leaders, we are here to correct the mess by endorsing Chol Jacob as the Coordinator of West Nile and what we know so far about Mr. Gabriel Mawic is that he is outgoing leader who served in the previous regime of Mr. Mark Adel, and given Mr. Gabriel Mawich’s wealth of experience, our team appointed him the Vice Chairperson as being technical assistance regarding the union’s policy. Gabriel Mawich‘s appointment was made in full consultation of his college [NIMSA].

We humbly appeal to you Mr. President to accept our letter or petition to clear doubts among our students of West Nile. Some students have already threatened to pull out from the union in Kampala because it doesn’t solve their grievances amicably. Our thoughts were that once you made it into power, you will then bring changes and correct the mess created by the previous administration (this is taken from Moro Charles’ speech, electoral chairman).

As South Sudanese, we have to sit down to solve this issue so that it cannot deteriorate any further, we hope you will listen to your people. After election, the documents such as the constitution and the certificates were handed over to the new coordinator who is none other than Mr. Chol Jacob. The only solution for this is for you Mr. President is to send the delegates to come and brief South Sudanese students here in West Nile.

Below find the declaration of Gabriel Mawich:

I, Gabriel Mawich, do here by endorsing and declaring Mr. Chol Jacob as Coordinator of West Nile in order to clear the misunderstanding that has happened. What happened was a total confusion brought by the previous Coordinator who is none other than Mr. Isaac Pel. I therefore, assured you Mr. President that the elections were held by Mr. Isaac Pel before he left the office last year.

This letter was written and endorsed officially by the following regional leaders putting Mr. Chol Jacob as the Coordinator and appointed Mr. Gabriel Mawich as Vice Coordinator.

Mawien Marko is the contact person and can be reached through mawienmarng2@gmail.com.