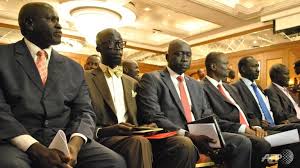 SPLM/SPLA members attend talks in Addis Ababa, Ethiopia to try and broker a peace deal that will include the formation of an interim government. The talks are adjourned until further notice. (Photo: AFP/Jacey FORTIN)

June 23, 2014(Nyamilepedia) — South Sudan peace talks have been adjourned indefinitely. According to Mabior Garang de Mabior, the deputy spokesperson for SPLM/SPLA, the Intergovernmental Authority on  Development(IGAD) postponed the peace talks citing the SPLA/M’s failure to attend the “multi-stakeholders roundtable negotiation” on Friday.

“The SPLM/A in opposition failed to attend the multi-stakeholders roundtable negotiations. This is in contradiction to the 9 May 2014 agreement as well as the 10 June 2014 communique which provides for the inclusion and participation of other stakeholders in the negotiations for a new political dispensation in South Sudan including arrangements for transitional government of national unity.” – The IGAD press statement partly reads.

Although the IGAD blames the SPLM/A in Opposition for lack of progress, the armed oppositions believe that the IGAD is imposing on them new frameworks that were not agreed upon by the warring factions.

“…It looks as if the mediation has backtracked from the April 28th Agenda and Framework, and a new Framework, not agreed upon is being imposed on the warring parties.” reads part of the report.

The SPLM (in Opposition) has expressed its dissatisfaction, citing unfair selection process of the civil societies; however they remain committed to the IGAD-led political settlement.

“The SPLM/A has officially expressed its dissatisfaction to the office of the Special Envoys on South Sudan, regarding the flawed nature of the selection of stakeholders.” part of the report reads.

The armed opposition believes that the rigging and any other unfair policies favored the government but not the IDPS that are currently suffering in the UNMISS camps across the country.

“The selection process didn’t put into account those displaced by the conflict in the UNMISS camps, the neighbouring countries and in Diaspora. The SPLM/A fears that the mediation undermined inclusivity by presenting government sponsored institutions as credible South Sudanese civil society Organisations.” – The report reads.

The deputy spokesperson also reiterates that the 9th May Agreement and the 10th June Communiques do not address the “roundtable format for negotiation” for them to be violated by the recent boycotts.

Despite, the SPLM/A in Opposition believes that the IGAD should not have postponed the talks because such decision will “unnecessarily prolongs the war and the suffering” of the people.

“It is unfortunate that the mediation has decided to adjourn the mediation indefinitely as this will unnecessarily prolongs the war and the suffering of our people.” Reads another part of the SPLM/A report.

The report concludes by reaffirming the commitment of the SPLM/A in Opposition to the IGAD-led peace process.

“The SPLM/SPLA would like to assure the people of South Sudan, the region and the world that it is committed to the peace process and strongly believe that the only solution to the current crisis in South Sudan is political and not a military one” The Deputy Spokesperson concludes

← Kiir And Machar Make No Mistakes On The IGAD Troops!
Wani Igga is visionless and liability!!! →

Activists Complain Of Women Under-representation In The Latest Government Appointments

South Sudan rolls out the second phase of polio vaccination

Opinion: JCE, the axis of evil governing the country by proxy