The Eastern Nuer Has Made it Again, Another Manifesto!

Dr Riek Machar, the man who will recognize Pagak as the city for federalism establishment: 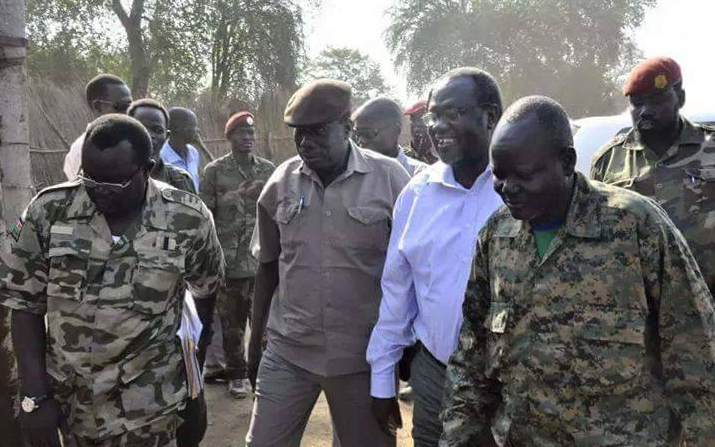 May 27, 2015(Nyamilepedia) — Dear compatriots, allow me to thanks the land of Latjor Dingyian as they called it. I know some of our readers may find this post interesting due to it format, maybe individuals will think about this message differently to why I choose to appreciated the land instead of the people that own it. I also would like to highlight that, the purpose of this writing is neither about making a political point nor inventing an analysis theory, in fact my intention is to share with you some of the factual side of South Sudanese history that may not have brought to light.

Sincerely, every community has its own norms, beliefs and values. So to start with in this part of Nuer, our new nation has achieved and delivered some of the unforgettable goals and objectives then any region as I can recalled. As it happened years back, it was so amazing for Eastern Nuer to host another South Sudanese resistant which is now depending themselves from tyrant and oppressed regime in Juba. The territory is hosting south Sudanese globally, in particular who have subjected to inequality, injustice and lack of freedom by their leader whom had fought with them during the struggle. Briefly, for those who do not know the geographical boundary of Eastern Nuer (known as the Latjor State), this land is located at the Eastern of Upper state, bordering Ethiopia and Eritrea. (Easter Nuer)

There are always different views, perspectives, critiques and solutions when it come to public domain in every society, However, sharing these photos may provide us with better understanding on my suggestion arguing that stated about the important of Eastern Nuer in South Sudan history and why I think we should appreciates this territory rather than her habitant/people. To be frank, none of you have never thought or had time to think for a moment about why South Sudanese people always preferred flowing East ward when there is unrest in the country.

Don’t try to tell me that, we come here because the Ethiopia was the only country that can accept us, may be this war will answer your argument in case you twisted it that way. Truly, I believe some of us individually have thought about this in one way or another, land is greater than her people. Thank our creator because he give leaders who will understood the important of this land(Lajor Dingyian’s Land) by respecting all the things we have achieved before and hoping for more in this struggle. So far, as people of the land it is time to critically think about some of the national agenda we have achieved while in this corner.

I belief because love is land is the reason why we are scarifying ourselves and fight for equality, justice and freedom from those who had intent to promote unjust laws. I also belief that, blessing of the land had contributed and have let us to every success that we have achieved during the course of our both struggles. In contrary, lack of thanks giving as required by all beliefs and values cannot be ignored, so poor acknowledgement and neglecting of Bilpam the most iconic location was never a good thing to do.

Everything we have got in our hands today begin in this part of the Upper Nile, that mean Eastern Nuer remain the precious tone and foundation of our identity. Kiir and his elites have completely ignore the fact that, their communist ideology had it first blessing in that land he currently engaged destroying. Kiir cannot be a successful leader because he is tribalist man. I don’t understand why he chooses to establish a fake Bilpam in Juba forgetting the true Bilpam that put him to power, Bilpam that trained the fines soldiers fought the North, For sure, without considering norms, beliefs and values of the land, success we gain in this beautiful Land ( muun Latjor Dingyian) has been destroyed and dusted by those who beliefs in myths(KIIR Mayardit). However, this could be a different when we South Sudanese, install our democracy which will recognize Land efforts and her people.

This will mean that, a federal conference building will build in Pagak by our great leader, the founder for self-determination, the architect of South Sudan independency Dr Riek Machar and all his colleagues as shown in photo so that no one will forget how important you are Pagak, and how much you love to us. A land cross by Nile River, A land that has been prophecies by Isaiah in Bible (18:1), A land that call us from the Western part of Nuer so that we inhabited her. What a blessing to have you, beautiful land, we will honor her from this generation to the next generation.

You can reach me through p.nyan2010@hotmail.com.au