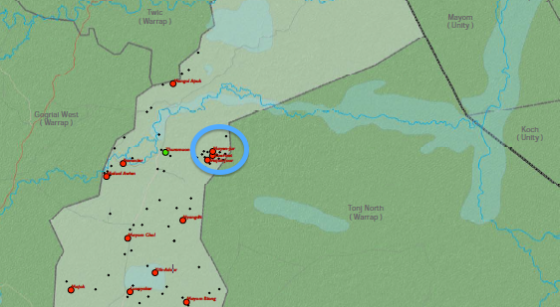 The SPLA military spokesman, Col. Philip Aguer, believes that the attack in Gogrial was carried out by the SPLA in opposition, a report that his counterpart in opposition, Brig. Lul Ruai Koang, denies.

“In an attack, 8 people were killed, unfortunately, and 11 wounded. The SPLA based around managed to protect the property of the civilian, which was the target. And after the attackers were defeated and they left heavy casualties behind them and they withdraw towards Unity State” Aguer said.

Aguer believes that 6 of the 8 people killed were soldiers and two were civilians. Aguer furthered that the attack is a violation of ceasefire agreement that Salva Kiir and Dr. Machar signed on May 9th.

Brig. Gen Lul Ruai Koang, the military spokesperson for the SPLA in Opposition, denied any involvement of his SPLA faction, in any fighting in Warrap state or else where in the country. Lul believes that the attack could have been carried out by any cattle raiders from from within Warrap, Lake or Unity states.

“No, I’m not aware of any report of fighting in Warrap. You know, Warrap state, Lake state and Unity are known as triangle of no listener. We have a lot of cattle raiding taking place. The three communities are too hostile. Since I have no information from our forces, I’m sue they must have been civilians fighting over cattle or any other form of livestock.” Brig. Lul said.

Col. Aguer, however, fears imminent attacks in multiple fronts in Unity, Upper Nile and Jonglei states in the next few days. Aguer pledges that his forces will fight back should their forces feel threatened by the armed opposition.

In response, the military spokesperson for SPLA in opposition said that Aguer is not telling the truth. Lul argues that his forces do not intent to attack any government position, however, they will continue to contain the government forces from advancing into their territories.

Aguer reiterates that his office will continue to report all the violations of ceasefire agreement by the rebels to IGAD’s monitoring and verification teams.

← Media/Press Censorship Is an absurd and Unconstitutional!
Clinging to power not only make you look like a clown, but a total disgrace to the society. →