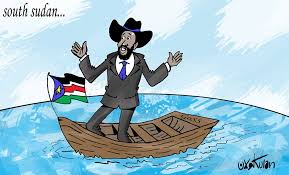 July 24, 2014(Nyamilepedia) — While we are appreciative of your efforts to bringing a lasting peace to South Sudan in the midst of man-made crisis, which caused thousands of civilians dead and millions displaced, we are writing to you to express our strongest opposition to your invitation to President Salva Kiir Mayardit to United States (US) for US-African Summit.

The Nuer Supreme Council has learned that Pres. Kiir is invited along with others African leaders to attend the Summit hosted by Brooks Institute comes August 4th, 2014. We feel Pres. Kiir’s invitation is misplaced and uncalled for considering the magnitude of the crimes against humanity he has helped committed. Based on these atrocities, we, the Nuer Supreme Council kindly asked your high esteem office to reconsider and revoke Pres. Kiir’s invitation.

Briefly, the Nuer Supreme Council is the highest organ and intellectual body of the Nuer nation. Its mission is to advocate, devise, develop policies and implement solutions of societal and national issues. In principle, our motto is nonviolence and peaceful resolution of societal matters and state of affairs. Thus, serves as our core value and golden rule. Nonviolence is our guiding principle and a philosophical approach to issues of importance as an organization.

Since the Nuer Juba Massacre in mid-December 2013, the Nuer Supreme Council didn’t release any press release condemning the massacre because, as an organization, we were dumbfounded and shocked by the magnitude of the crimes committed against one ethnic group by Pres. Kiir’s government.

In this regard, we are cognizant of the fault lines and its heinous outcomes and we held those who committed these crimes fully responsible. We strongly condemned all the atrocities committed in the strongest terms possible. In the investigation, we highly recommended the involvement of the international community in order to bring the perpetrators to book and face full force of the law.

As referenced above, we, the Nuer Supreme Council is saddened by the fact that your office has extended an invitation to Pres. Kiir. We found this invitation terribly disturbing and indeed disrespectful and miscarriage of justice. Not only that, the invitation exceptionally undermines your stand on the side of justice and humanity.

As such, its betrayed global justice and right to life. In many respects, it’s counterproductive to what you stood for but disgraceful insult to all voiceless South Sudanese whose love ones were murdered by Pres. Kiir’s private forces between December 15th -20th, 2013. Lastly, it’s an appalling insult to peace loving Americans and friends of South Sudan globally.

On the other hand, it’s an open secret that Pres. Salva Kiir is a vicious killer and a ruthless dictator who murdered his own countrymen and women based on their ethnicity. In our view, Pres. Kiir and his cronies deserved nothing than to pay for the
crimes they have committed from your administration and international community and not dine with world leaders. The least, the Nuer Supreme Council expects from the White House and the international community is a diplomatic isolation of Kiir’s government due to the following reasons:

As far as humanity is concerned, Pres. Kiir has lost touch with human’s feelings and doesn’t deserve even a handshake with the world leaders let alone meeting them.

Based on the evidence presented, we believe permitting Pres. Kiir to come to the US will be a grave mistake and will send a wrong precedent that your administration (Mr. Obama) condones savageries and leaders who kill their own citizens in cold blood. To avoid this practice Mr. President, Pres. Kiir must not be allowed to set foot on the American Soil.

Besides, allowing Pres. Kiir to dine with the world leaders in the U.S. will stains America’s good image, which promote global justice. Pres. Kiir’s acts resemble deeds of Adolf Hitler of German who killed 6 million Jews and Osama Bin of Saudi who murdered 3, 000 Americans on 9/11.

If no single world leader would ever invite Adolf Hilter or Osama Bin Ladin to his/her country for the heinous crimes they have had committed, Mr. Obama, why are you inviting a man who murdered more than 10, 000 innocent civilians in cold blood? Is this not an intelligent insult to the American people? And what kind of message are you sending out to the world regarding those who took laws into their own hands?

In closing, based on the reasons presented, we are confident that you will reconsider your invitation to Pres. Kiir. Certainly, this will send a very strong message that leaders who committed heinous crimes against humanity are not the US’s friends but foes.

← Breaking News: South Sudan Ambassador to Uganda admitts funding UPDF with Billions of Dollars
The Adulteration of the Legacy of the Struggle →