• I come from Bor County, Baidit payam.
• I grew up as a lost boy since 1987.
• Forty one years of age, married with children
• Holds Masters and Bachelor of International Relations
• Have written five formal articles against dictatorship in Juba
• Have extensive experience of leadership 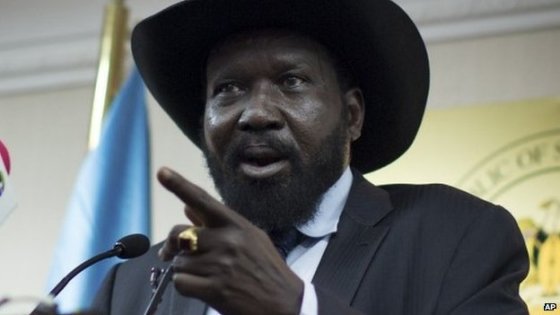 Sept 26, 2014(Nyamilepedia) — I am one of those who have been complaining about the way Kiir Mayardit is leading our nation way back before our beloved country came to its knee and bled to death starting December last year. This great nation had a huge opportunity to be an envy of the region was it not for Kiir’s toxic leadership, now we are the laughing stock.  I have no doubt in my mind that South Sudan is blessed with great leaders who reach overboard for the good of humanity. Dr. Riek is known for his high affinity for democracy and that’s what he epitomized in the lead up to his dismal from vice president. Not only did he called for a good system of governance and democratic constitution, but he also complained about the level of corruption and publicly declared his own assets which made him the only leader to do so in South Sudan.

When it comes to leading people of South Sudan out of despair to their dream live, Kiir Mayardit is not the right choice for that noble call, he is a wrong leader in such a demanding time. South Sudan needs a leader who is driven by an ambition for change, and an aspiration to impact lives of the ordinary citizens for better, not the one driven by lust and greed. South Sudan will literally be a nation that is condemned to perpetual agony and disgrace if Kiir Mayardit remains the president of South Sudan now and into the future. Peace and unity will continue to be a dream that would never come true for the people of South Sudan. And if it does come true, it won’t hold for much longer as long as Kiir is still occupying the highest office in the nation. His phobia for a political challenge often turns him into a ruthless and rapacious being, in other words, there is no crime that president Kiir and his cohorts would not commit just to remain in power unchallenged. He would easily relapse or resort into violence against any challenger and/or critics who eyes his seat or criticizes his dodgy actions. The faked coup attempt in December last year was a tactical move against his potential challengers; it was concocted to deflect public attention from the realities of his failure, and confuse the very people who live with the consequences of his manipulations. This gives him an opportunity to indoctrinate them with an official propaganda, rooted in the interest of those who exercise power with him in the government.

Kiir’s regime fits the primary characteristics of a political cult group, which include authoritarianism, exclusion, close-mindedness, and dogmatism among others. Although President Kiir never went through any proper formal education in his entire life, he awarded himself an academic title of Dr. because why not? John Garang was a Dr., Riek Machar is a Dr., and Lam Akol is a Dr., yet people have been mind numbed to the point that they could not see anything wrong with this move as they could not see anything wrong with Kiir instigating the 2013-2014’s conflict. They think it is okay as long as it makes our super leader happy; after all he was elected. ‘’The word elected representative has been made meaningless by our Junubiin people, does being an elected representative of the people give person a license to kill or drive the country into turmoil? Elected leaders use election as if it is a license to kill or take the country back to the lowest level. What does it mean when you are an elected representative but don’t acts like one?’’ (Awut Garang Kuir).

The People of South Sudan have been structured into the bunch of docile robots who can only be programmed and deprogrammed at will by Kiir’s opportunists regime, who tells people one thing today and totally different other tomorrow. For example, the public was led to believe that, Yau Yau is the worst enemy of the nation some few years ago, now they are deprogrammed to switch from that believe and look to him as a man of peace, the only equivalence of Pope John Paul the II according to president Kiir. Kiir’s words and actions don’t rhyme at all. Remember his July 9th, 2013 speech? My dear citizens, I have not forgotten you. I am aware that many of you cannot afford a meal every day. I am aware of that mother who struggles to feed her household of twenty people with less than twenty pounds a day. I am aware of the SPLA soldier whose salary cannot meet all of your needs.  You struggle to pay your house rent, feed your family, pay school fees and pay for medical treatment. These scenarios must change. As your President, I promise you that we will work tirelessly to change them (president Kiir). Again, another lip Service of glamorous speeches which could not be backed up by an action, Kiir would just says things in an attempt to diffuse the situation or attribute the blame, he does not always say what he means, or means what he says, he is the most political conman ever.

During SPLM/SPLA Movement, General Salva Kiir Mayardit was well known for being clumsy and unreliable when it comes to military operation. In almost every operation he led, anything must go wrong. For example, Intifada brigade fought itself under his commands in earlier 90s, just few weeks after completing their training; Kapoeta fell back to the enemy when he claimed to have missed the enemy in the desert. And his slowness and poor decision making costed more lives during ‘Uyahana’ or Eritrean War of 1991, also known as the dark days of Gilo River.  In the latter case, general Kiir was charged with the task of evacuating minors (lost boys) and other civilians when Eritrean People’s Liberation Front (EPLF) defeated Mengistu’s forces and kicked pro Mengistus out of Ethiopia, Kiir did not know what to do to save lives of those civilians who looked up to him for security. One of his critics had this to say in the onset of the current civil war in the country, ‘Kiir actually doesn’t look like a daredevil man who enjoys horrible things, but he just doesn’t have an intrinsic know-how to help him make right decisions’’. This is very true; in fact most of his mistakes are stupid and avoidable, including the current civil war. It is very easy to remember what Kiir didn’t do right than otherwise, and he would have a gut trying to explain why he didn’t do it right, he thinks he has mastered the art of justifying the unjustifiable. President Kiir has set a very low benchmark for future leaders of this great nation, SPLM Party has now been infested by bunch of sycophants and deadwoods, people who are there just to cover up his incompetent and strengthen his hold on power. The party will continue to produce leaders of very low calibre unless a change in political culture is given a chance; Kiirism is not a way forward, but a disaster to the nation. Kiir and his colleagues think that politics is a dirty game and requires dirty minded people to play it, they are dead wrong. Leaders like Muammar Gaddafi of Libya, Saddam Hussein of Iraq and Hosni Mubarak of Egypt did think in the same way, Kiir’s regime should learn something from their demise and similar ordeal should be avoided at all cost.

In conclusion,
Unlike his former boss Dr. John Garang de Mabior, president Kiir is somewhat illiterate; he did not do any formal studies, which categorizes him as an uneducated. This could be the reason why most of his victims are educated ones. However, to his credit, he left his studies at young age for something equally worthy and even more honourable, the ANYA-NYA ONE Movement, which later gave birth to the SPLM/SPLA Movement.

To reach the author: alierateny@yahoo.com.au

2 comments for “KILLER IN THE SEAT OF POWER: KIIR AND HIS REGIME”

Opinion: South Sudan, “Not merely a Woman”, what are the matters?

Opinion: The Demonstrations Led by only Dinka-Bor in Jonglei State Amount to Partial Declaration of Return to War-Like Rhetorics