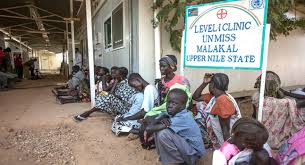 Mr.Simon Kun Puoch Mar , Governor of Upper Nile state returned back to malakal on 18.12.2013 and addressed the state citizens and the public in speech which was seen as transgressed and haughty .Mr.governor had narrated a number of stories of juba incident where he jealously put all the blames on Dr.Riek Machar Teny and his supporters.

He recited the song that says ” Riek killed dinka-bor in 1991” and that he has repeated again this year ; he went on denying any killing of nuer by security agents and special trained militia allied to presidency in Juba that had triggered anger among some military generals and nuer community in the Upper Nile state. Mr.Simon Kun had asured the public and applauded his loyalty to President Salva Kiir and promptedly downplayed any defection in the state.

On 20.12.13 ,at least 50 Nuer elders and some government officials including Maj.Gen .Gathoth Gatkouth nicknamed ” Bipour ” ,formerly Upper Nlie State governor ‘s security advisor and Maj.Gen Saddam Chayuot Manyang had approached Governor Simon Kun to persuad him to join looming breakaway of some military generals who were not happy with leadership in Juba.The nuer elders advised , educated  the incumbent governor to declare his defection from Juba ‘s regime who have committed war crimes and crimes against humanity to innocent civlians in three days , but nevertheless he had definitely rejected and warned the elders of their security concerned .

During the meeting convened between the governor and the elders ,Mr.Kun Puoch and Gen. Gatkuoth reportedly , had developed personal grudges and as result ; governor Kun proudly exercised his gubernatorial powers and gave Gen .Gatkuoth an ultimatum to leave the state vountarily in less than 24 hours or otherwise. Immediately after the meeting  ,Gen. Gathoth and Gen. Saddam managed to escape and they made it to UNMISS log base to take refuge in for their life and possibly ,Gen.Bipour en routed to Nasir county overnight and left Gen.Saddam in UNMISS compound .

On 21.12.203 , a government vehicle ” four wheels toyota pick-up ” carrying seven nuer government officials , was ambushed in Baliet county by ngok dinka and all fear dead because of their ethnicity , may Heavenly father rest their souls in eternal peace ; this have also added an salt to the wound.

Malakal is the capital of Upper Nile state was predominantly home to many tribes of different cultural diversity , and foreign nationals running their normal and routinely social activities pertaining trades , civil services in government , military services ,studies in schools and university (Upper Nile university-UNU) had expereinced terrible and horrible momments .

It is located along the eastern bank of River nile , approximately 290 miles away north of Juba , the capital city of Republic of south sudan. I was in beautiful and lovely malakal town pursuing my dreamful future on general degree of veterinary medicine (Hons) at Upper Nile university .

As heavy fighting erupted at presidential guards unit ( gaida) , later spread to newsite military airforces as well as general army ‘s head quarters – bilpam in Juba  ; I and my colleagues , students of Upper Nile University were shocked by unbelievable and disturbing news whilst we were revising and reviewing sheets and our other academic materials to kickoff the final examinations of 2nd semester on dec 18.2013 and on the other hand , the entire population in malakal were preparing for cheerful chrismass in the light of welcoming the birth of Jesus christ , the only begotten son of God and the subsequence occasions of new year.

The 2nd semester examinations did start exactly when the former vice chancellor of UNU Prof.Bol Chol insisted the continuation of unversity programs regardless of Juba fighting and he had assured the students of their safety in hostels and elsewhere in the town and as such ; the first tests underwent as normal commencing from 18-23 dec,2013.

In the afternoon of 23.2013, traders in malakal big market (سوق الكبير) were told to locked down their shops and all shopping centres and disperse in the pretext of insecurity have reached it peak and culminated the town after three days of intensive security meetings failed. Because of unusual order ,it left the public with no choice , but only panicking, fearing and  fleeing .On the same day in evening hours , UNU ‘s adminstration announced the closure of univesity through its dean of student affairs mr.Malony Keer quoting a short statement  ” the university is closed until further notice ” and that is all as a result of insecurity in the area. we felt dizzy , bewildered and unhappy .But no choice only fleeing.

At around 9:00-10:00 pm , government officials were seen evacuating their families driving their V8 and pick-up vehicles in high speed retreating northward ,probably to UNMISS compound and beyond towards AKoka , maluet and Renk counties. civilians were worried on that night .

In the morning of 24 dec, 2013 at 05:45 Am  people still sleeping on beds  ,we heard fierce fighting erupted ; heavy gigling of artillery bombs and light machine gunshots likey heavy rains in the direction of military barrack at hai shawada between SPLA loyal to juba regime undercommand of Gen.Johnson Gony Beliw , commander of SPLA sector two and those of SPLA  , police and other organized forces defectors led by more than 8 brigadier generals and number of conels believed to be allied to Dr.Riek Machar. the situation was transfigurated from normalcy to chaos and devastated in matter of minutes , people were fleeing , even dogs were running for their life , their tougues out … life is good.

The Military assault went on till evenning for control of malakal town until the SPLA defectors controlled the town after furious battles and overran the town.

The next morning  ,25.12.2013 a day supposedly for Chrismass festival on the birth of Jesus christ , still we could hear bullets whizzing across the town ;no prayers , no network  no hope for calm.we didn’t celebrate the joyous chrismass.Members of police and some youth were seen carried out uncontrolable looting in malakal big market .shops were broken and vandalized.

Then on  27 .12.2013 exactly at 10:00 Am, government troops launched a strong offensive against the SPLA and other organized forces defectors after they received reinforcement from first infantary division stationed in Renk , the border town with Sudan.The defectors tactically withdrawn and were seen retreating towards south of malakal ,and more likely to Doliep hill.

Here , former state government’s official spokesperson and minister of information Mr.Phillip Jeben Wogual was heard speaking over south sudan radio in malakal on 28.12.2013, urging citizens to remain calm as the SPLA have defeated the enemy ;he said . on that date , police vehicles also were seen caped with flying white flags showing peace and neutrality .

Following the capture of malakal by government forces  , fews citizens returned to their homes , large number of people had congested at bus stations travelling to Renk county and possibly to sudan ,and dozen others remained in UNMISS cmpound . Students of Upper Nile university from Bahr el ghazal and Equatorian regions were evacuated to Juba through paloich airport . Little calm was sensed .But the magnitude of the situation was very volatile.Malakal teaching hospital was flooded with wounded soldiers and civilians caught by crossfire,external wards were created outside the building made with tents ;International committee for red commission( ICRC) staff tried their best in treating the injuries.

The conceit of co-existence was totally hurt  , it became loose as my fellows shilluk people were grinding their teeth and grooming the ground, and despisingly blaming dinka and nuer tribes for all impediments and destructions inflicted of peoples of south sudan.

On 30.12.2013 , some SPLA soldiers of dinka ethnic group were accused of taking unlawful jurisdiction into their hands by raping  ,targeting nuer youth and looting their properties around hai salam , hai tanmia ,and hai Tarowa outskirts of malakal town..these soldiers were reportedly jailed but later released after intervention of high profiles from military leadership in Juba and this was believed to be the reason behind the defection of Brig.Gen.Marko Liah Chany ,SPLA sector two former chief of military intelligence (MI) after he had narrowly survived an assasination attempt in Juba……….To be continue on Jan 14,2015.

← THE IDEOLGICAL WAR BETWEEN NATIONALISTS AND HIJACKERS IN WHAT WE CALL SOUTH SUDAN NOW!
South Sudan Is Led by the World’s Fool-est and a Monster! →

Opinion: There is no Justification for an Evil Act

Opinion:The Known Untold Story of What has Become Ministry of Finance and Planning for Paan Achuil Lual (Part one)